The best-selling small car in Germany in the 2010s: VW up!

Microcars are a car - vehicle class , the dimensions of the still under the small car settled and the vehicle segments of the European Commission as the A segment is called. The Federal Motor Transport Authority refers to passenger cars that it classifies as being below the size of small cars as minis . Very similar vehicles , but with a precise limitation of size and performance, are the Japanese kei cars , which are tax-privileged there. 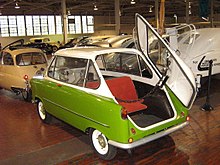 Small cars as a separate vehicle class were defined in the early 1990s, although four-seaters of this size had already existed before that, for example Fiat 500 and Mini (both shorter than 3.1 m).

The small car appeals to those people who are looking for an inexpensive vehicle for short and medium distances that does not need to be suitable for traveling and family. There are now different orientations of size within the class of the small cars.

The Roller Mobile European post-war period are attributable also to the microcar from today's perspective, were in West Germany but partly as a small car called. In the GDR, on the other hand, scooter mobiles and other mini cars were already referred to as small cars back then and, as is customary today, small cars were distinguished from them. At that time, small cars had, among other things, a displacement of no more than 0.45 liters. The engine power and weight of today's small cars are greater than those of the small cars of that time.

Many manufacturers produce small cars with partners in order to keep the price level expected by the customer. For manufacturers with multiple brands, badge engineering or a platform strategy offer an alternative way of limiting costs.

Small car with only a few changes to the body, mostly just badge engineering :

Small cars on the same platform with an independent body:

Small cars on the market

From 2011 to 2013, the British sports car manufacturer Aston Martin offered the Cygnet, a small car based on the Toyota iQ . The car is optically adapted to the design of Aston Martin and has also been equipped with a higher-quality interior. A side effect of the introduction was a significantly reduced fleet consumption . With a list price in Germany of € 37,995, the smallest model from Aston Martin was priced well above the other models in its segment.

Chevrolet has the Chevrolet Spark, made in South Korea , on offer as a real microcar .

The Japanese manufacturer Daihatsu had downright specialized in small and micro cars. Daihatsu was also the only manufacturer to offer “real” kei cars in Germany, albeit with a larger engine. In Germany, Daihatsu was last present with the “normal” small car Cuore , a few years earlier also with the micro-coupé Copen and the retro- designed Trevis . On January 31, 2013, Daihatsu stopped selling new cars in Europe.

Under the Smart brand (since 1998, model change in 2007 and 2014), Daimler offers the shortest of the small cars in Germany. The Smart Fortwo is a two-seater with a length of almost 2.7 meters. Due to its large width, the vehicle is not considered a kei car in Japan; there was a slightly modified version of the first generation. The five-door Forfour , which shares the platform with the third-generation Renault Twingo , has also been available since 2014 . Since 2019, Smart has only produced vehicles with electric drives.

Fiat offers the retro vehicle Fiat 500 and the Fiat Panda as miniature cars , both of which are, however, significantly larger than the small rear-engined models built into the 1990s and the first generation of the Panda, which was still considered a small car at the time .

The first-generation Ford Ka, available from 1996, was one of the oldest small cars on the German market before it was replaced. The second generation of models (technically related to the Fiat 500 ) has been available in Germany since February 2009 . From 2016 to 2020, Ford sold the third generation of the subcompact under the name Ford Ka +. Since then, Ford has not offered a vehicle in this class.

The Honda Life is not offered in Europe, but is more like a microvan .

With the Hyundai i10, launched in 2008 and the Kia Picanto , the second generation of which appeared in 2011, both brands offer independently developed microcars.

From 2013 to 2019, Opel offered the Opel Adam as a small car. In mid-2015, the Opel Karl replaced the predecessor Opel Agila, which was identical to the Suzuki Splash . The Agila was designed as a microvan , while the Karl had a lower vehicle height. With the Opel Adam, the focus was on design, with the Karl, however, a low price was important. In Great Britain the models were offered as Vauxhall Adam and Vauxhall Viva (Opel Karl). In May 2019 the production of Adam and a month later that of Karl was discontinued.

Peugeot / Citroën has offered the Peugeot 107 or 108 and the Citroën C1 since 2005 . The vehicles are identical to the Toyota Aygo . Body shapes with three or five doors are available, with an exterior length of around 3.43 meters being relatively short for a five-door mini car. Models with a soft top have also been available since 2014. Another car in this vehicle class was the Citroën C2 , which was produced from 2003 to 2009 and was only available as a three-door . As a microvan , Peugeot manufactured the 1007 from 2005 to 2009 , which attracted attention with its electrically operated sliding doors.

The first generation Renault Twingo was already available from 1993. In 2007 there was a model change. From mid-2009 to October 2013, Nissan produced the Pixo as a representative of the small cars. The vehicle was identical to the Suzuki Alto , which was manufactured from 2009 to 2015.

The Subaru R1 and R2 models are kei cars ; they are not offered in Europe.

In Japan, Suzuki offers a wide range of small cars. In Europe, the Microvan Suzuki Splash (identical to the Opel Agila ) was available from 2008 to 2014 and the slightly smaller Alto from 2009 to 2015 . Since 2014, Suzuki has offered the Celerio in Europe, which is intended to replace both the Splash and the Alto.

The Indian manufacturer Tata Motors has presented the Tata Nano, an extremely inexpensive vehicle for its home market , a four-seater only 3.10 meters long. The vehicle is not without controversy because it does not have any safety devices. In order to enable export according to EU directives, a comprehensively modified version with a driver airbag and reinforced body is planned for the European market.

The Volkswagen AG is present in the class of mini-cars since 1997, first with the Seat Arosa , on the one year later the identical VW Lupo followed. The Arosa ran out in 2004 without a successor. In 2005 the production of the Lupo was also stopped. This was followed by the VW Fox , which is very large for this class , and which also fell far short of the high sales figures customary for VW in Europe. The successor to the VW up! produced together with the Škoda Citigo and Seat Mii based on the same floor pan in Bratislava . The models of the platform known as the New Small Family received a facelift in 2017 and 2019.