This article or section needs to be revised. Further details should be given on the discussion page (section Article structure) . Please help to improve it , and then remove this flag.

In German, a van [ væn ] is a motor vehicle with five to seven, in rare cases up to nine seats (with a continuous bench in the front), which thanks to a variable seating concept, usually also with individual seats at the rear, and a high silhouette Can be used much more variably than a conventional station wagon. In a broader sense, it refers to all types of passenger cars with a raised body, high-roof station wagons and minibuses . Smaller specimens are also referred to as multi-purpose vehicles (MPVs), in German sometimes as station wagons .

The Chrysler Pacifica Hybrid is currently the only van in the world with a hybrid drive whose battery can be charged from a socket .

The more or less all-terrain Sports Utility Vehicles (SUV) do not belong to the vans .

The word Van is an Anglicism that has taken on the meaning of MPV in the German-speaking area . In US parlance, the word van , however, vans and large, boxy vans for the transport of goods ( vans ) and originated there, the word "Caravan", the formerly used term for wagon . Vehicles of the same design and equipment that are intended for passenger transport are called minivans , while larger variants, such as B. the GMC-Vandura , however, is called conversion vans ("Umnutzungsvan"). Traditionally called US-American spacious sedans with plenty of seating Station Wagon ( station wagons ), which differ from the minivans primarily by the fact that they are flat.

Now that the term van has become common in German, the expression MPV is being used more and more for more spacious station wagons such as the Ford S-MAX or the Mercedes-Benz R-Class .

There are also the names family car and seven-seater . The car environmental list of the Verkehrsclub Deutschland distinguishes it from the compact class as follows:

Plymouth Voyager , first vehicle of its kind in North America (1984)

From 1954 to 1961 there were the six-seater Lloyd LT models, which with weak engines and economical equipment did not achieve large numbers. From 1983 vans were introduced from Japan: the Mitsubishi Space Wagon , the Nissan Prairie and the Honda Civic Shuttle . In 1984 the Plymouth Voyager followed on the North American market and the Renault Espace in Europe. From 1988 the Chrysler Voyager , which was an offshoot of the Plymouth Voyager, was offered in Europe . Chrysler only produced the Voyager in North America for the first few years. From 1991 the production of the Voyager also started in Europe. Other automobile manufacturers followed on the European market years later with comparable models. For example, VW and Ford jointly developed a vehicle that came onto the market in 1995 as the VW Sharan , Seat Alhambra and Ford Galaxy .

In North America, Chrysler established this vehicle segment almost single- handedly with its car brands. In parallel to the Plymouth Voyager, the company also sold an offshoot under the Dodge brand, the Dodge Caravan . A few years later another sister model was added with the Chrysler Town & Country .

Large vans have a variable interior concept. The seats are usually arranged in three rows of the shape 2-3-2 or 2-2-3, with the last row of seats being narrower because of the wheel arches. The seats in the second and third row of seats can be removed in a few simple steps. This makes it possible to obtain a loading area of ​​around two meters in length, which is extraordinarily large for a car.

Most customers buy the vehicles without the two rear seats, which are optional extras on many models. Retrofitting an additional seat costs almost 1,000 euros on some models. Numerous cases have been reported of seats being stolen from vans and then resold. 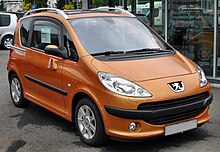 In the meantime, vehicles that are smaller than large-capacity vans are also referred to as vans in German-speaking countries. These are the compact vans based on vehicles in the compact class , minivans based on small cars and so-called microvans , which belong to the category of small cars .

However, the KBA only differentiates between large vans and minivans and not between compact vans, minivans and micro vans. This can be seen in the list of vehicle segments from the Federal Motor Transport Authority .