Coupling gear as a wide-angle hinge

A gear (or converter element ) is a machine element that can be used to change the quantities of motion . Sometimes the change in a force or a torque plays the decisive role. The movement to be changed is often a rotary movement (see adjacent picture, left), sometimes also a back and forth movement (see adjacent picture, right). A transmission generally has a drive to which the movement variable from a prime mover is “fed in” (e.g. from a motor ), as well as an output to which aWork machine is connected.

The manual gearbox known from the automobile or the gear train of a clock are mainly gear transmissions, which are only one of several types of transmission.

Gearboxes are mostly mechanical devices ( simple machines ), but can also be based on hydraulic , less often on pneumatic or electromagnetic principles. They consist of at least three links, one moving input and one output link and the machine frame .

They transmit and transform:

"Gears are used to transfer and transform movements, energy and / or forces."

Gearboxes with only fixed components (i.e. solids ) are called mechanical gearboxes . If liquids are involved, it is a fluid transmission or hydraulic transmission . The control of electrical generators and / or motors occasionally effects what is known as an electrical or electronic transmission.

The oldest gear system comes from Franz Reuleaux from the 19th century. He classified the mechanical gears as follows:

The most common task of a uniformly step-up gear unit is to adapt a given input speed to a required output speed. Example: 6000 / min of a car engine at the gearbox input to 1000 / min at the gearbox output (in order to achieve different ratios, automobile gearboxes have several gears).

The following terms are often used in connection with gears with uniform transmission of rotary movements:

The transmission is typically between a driving engine ( engine ) and a driven work machine (or a machine part). It is firmly or detachably connected to both via a coupling .

Gearboxes are divided according to various criteria:

According to the type of power transmission

Transfer of movements, forces and torques through rigid components, e.g. B. gears, chains, belts or rods 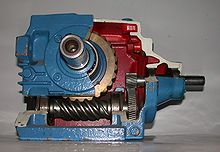 In the case of hydraulic gears (see fluid transmission ), the input and output sides are not connected to one another with fixed components (wheels, belts, etc.). The drive shaft sets a liquid inside in motion that drives the output shaft. A distinction is made between hydrostatic (with external pressure generation) and hydrodynamic (integrated pressure generation) gears.

Circuit diagram of the Leonard drive

An electrically controlled combination of a generator and an electric motor is often called an electric transmission. The definition of the gearbox as a compact machine element no longer applies to such combinations. An older example is the Leonardsatz , a newer the Magnetic-Electric Transmission Automat .

According to the design

Open design means that the elements of the gearbox are freely accessible. However, they are often disguised for safety reasons. Examples: Belt drive (formerly also called transmission )

Cutaway model of a car transmission

In gearboxes with a closed housing, no sand or dust gets into the mechanisms, which is important for low wear. The lubrication takes place via grease or a closed oil circuit. In the case of simple gearboxes, it is often sufficient for lubrication if one gear wheel is partially immersed in an oil bath and the oil that splashes on during operation also lubricates the other gear wheels. The housing is also used for noise protection and safety. Examples: automotive transmissions , differential gears

As cam gear mechanisms are referred to, in which tapped in the form of a moving curve of a scanner and (rotational or translational) to other transmission elements is forwarded. The scanning is usually one-sided, that is, the scanner runs on the curve on which it is pressed, but if the lifting forces are too great, it can also lift off the curve. To avoid this, various solutions for forced guidance of the scanner have been developed.

Cam bodies can transfer their curve to the scanner by rotation or longitudinal displacement. Often, cam bodies are used which are only designed as a segment of a circle and therefore oscillate back and forth for the purpose of scanning, corresponding to the back and forth movement of flat cam bodies.

Cam gears are very often used in automation to operate switches or to carry out complex movements. The most common use is in combustion engines, where cam gears ( camshafts ) control the opening and closing of the valves. From there, the problem of the scanner lifting off is also known (valve flutter).

The synthesis of cam gears usually goes hand in hand with the synthesis of coupling gears, which usually transmit and transform the scanned movements. There are special waveforms for optimizing the scanning behavior. a. are:

For this purpose, appropriately inclined sinusoids are generally used.

Coupling gears are gears that convert rotary movements into straight or oscillating movements, and vice versa. They are characterized by the coupling of at least two of the movable elements with a coupling .

The coupling is usually a machine part in the form of a drive rod , a connecting rod , a coupling rod or a sliding block .

The crank drive also belongs to the group of coupling gears . It converts a rotary (turning) movement into a translatory (straight-line) movement or vice versa. It is used, for example, in steam engines or in piston engines . (see also crankshaft )

Step gears convert a continuous rotary movement into an intermittent rotary movement. There is a pause between the individual steps until the next step begins. Index drives can be implemented with almost any type of gearbox.

Stepping gears are used to transform continuous movements into irregular movements with a momentary or temporal rest as well as with a pilgrim step (short backward movement). Step gears can be implemented, among other things, by means of gear drives (for example star gear drives ), gear coupling drives or coupling drives , but also cam drives and special gear designs.

The best-known type of stepper drive is the Maltese cross gear, in which the determining gear part (depending on the form) can take the form of a Maltese cross . They were used, for example, in film projectors and cameras to move the film step by step, but are not very common beyond that.

The phrase "sand in the gears"

Due to the function of a gear, there is the colloquial expression sand in the gear when something works slowly or only malfunctioning. Sand in the gearbox causes increased wear and can also block or destroy a gearbox. The phrase may have its origins in racing as well as in other competitions, such as those made in tenders. It is said that, in addition to other sabotage measures, sand is actually introduced into gearboxes and engines in order to put competitors at a disadvantage. Also, not all gearboxes were and are tightly encapsulated, which means that sand and dirt can get into the gearbox, as is the case with bicycles, agricultural machines or a concrete mixer .