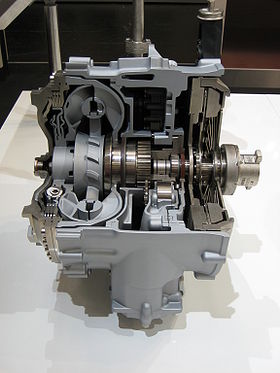 Fluid transmission are hydraulic transmissions for stepped or stepless speed and torque conversion . The output speed is almost always lower than the input speed.

At the turn of the 20th century, the problem in shipbuilding was to reduce the high speed of the steam turbine at high power to a low speed, as is necessary for a good efficiency of the propeller . Gear drives suitable for high performance could not yet be manufactured. One solution is the hydraulic transmission: a centrifugal pump draws in fluid from a reservoir, accelerates it and passes it on to the turbine. In the turbine , the flow energy of the liquid is converted into mechanical rotary motion. The liquid emerging from the turbine flows back into the reservoir. The separate arrangement of the pump and turbine results in considerable losses due to the friction of the liquid on the pipe walls, self-friction of the liquid as well as inlet and outlet losses. By combining all the components in one housing, most of these losses can be avoided. This idea goes back to Hermann Föttinger .

In hydrostatic gears, the pump and motor components are usually constructed the same except for small details: the pump housing is arranged axially to the drive shaft of the pump. Inside there is a ring with circularly arranged cylinder bores into which finger pistons are inserted in the same arrangement. These pistons are axially connected to a sliding disk that rotates with the housing, whereby the angle of the disk in relation to the ring with the piston ( swash plate machine ) or the angle of the ring in relation to the disk ( bent axis machine ) can be changed in adjustable machines . Such machines are generally referred to as finger piston pumps or motors (also axial piston pumps / motors ).

As long as the angle between the disc and the ring with the piston is 0 °, no oil is pumped. If you bend the piston side or the disc (depending on the design) to the side, the pistons, triggered by the inclined position of the disc or the ring with the pistons on the inside of the kink, enter the pump housing and exit on the other side. This results in a pressure side and a suction side, which are separated from one another by a type of cylinder head. The pump thus begins to deliver when it rotates. The pump is connected by pressure lines to the similarly constructed hydraulic motor, which converts the hydraulic energy ( pressure , volume flow ) back into mechanical energy (i.e. a rotary movement). By changing the articulation angle and articulation direction on the pump, the delivery rate and delivery direction and thus the translation and the direction of travel can be controlled.

In a fluid coupling (also Föttinger coupling according to Hermann Föttinger), the pump and turbine are combined in one housing (see also Föttinger principle ). The pump wheel sits directly on the shaft and is enclosed by the turbine. The pump sucks the oil on the shaft and throws it outwards directly into the turbine blades. For a fluid coupling, these are already all the necessary parts. The oil is sucked in by the pump wheel and accelerated to the outside. The impulse is transmitted to the turbine wheel, after which the oil collides against the housing and runs back inside to the pump wheel or into the oil sump.

The fluid coupling does not convert the torque, it only couples. A slip occurs, which is energetically converted into heat, so that there is a speed difference between input and output.

In order to achieve a torque conversion, a diffuser is integrated into the housing (see also Föttinger principle ). It essentially consists of blades to catch the oil emerging from the turbine. The oil from the turbine has a radial movement component due to the inertia and a tangential movement component due to the speed of the turbine. The diffuser diverts the oil and accelerates it towards the pump. To do this, it stands still, it is usually supported by a freewheel. The oil re-enters the pump with residual kinetic energy. With this arrangement, a speed-torque conversion up to a maximum of 1: 8 can be achieved. The efficiency drops sharply with decreasing or increasing speed ratio, which is why converter lock-up clutches are usually used in vehicle transmissions , which switch off the slip and thus greatly improve the efficiency.

Fluid transmission is used in road vehicles, especially in the field of automatic transmissions and in the commercial vehicle sector.

Hydrostatic power transmissions are mainly used for auxiliary drives with low power or as travel drives in construction machines (e.g. excavators or wheel loaders ), industrial trucks and agricultural machines (e.g. combine harvesters ). The pump and hydraulic motors can be arranged separately in a convenient place. One disadvantage is their poor efficiency , which is why they are rarely used in modern tractors . Exceptions are power-split transmissions in which only part of the drive power is transmitted hydrostatically.

In buses and other heavy commercial vehicles, a retarder is often installed as a virtually wear-free brake in order to reduce wear on the friction brakes and to increase safety by means of a second, independent brake system. A retarder is a special type of fluid coupling in which the turbine wheel is stationary. The entire kinetic energy of the pump wheel is converted into heat and transferred to the hydraulic medium, which has to be cooled. The regulation takes place by filling and emptying the pump room. The hydraulic medium in vehicles is usually oil. The vehicle's cooling water has recently also been used, for example with the Aquatarder from Voith , which is also part of the Pritarder braking system from MAN .

In the field of rail vehicle technology, the term hydrodynamic brake (also H brake) is used for the retarder . The mode of operation corresponds to the retarder also used in road vehicles, but the components must be designed to be correspondingly more powerful in order to be able to apply the required braking forces; When designing the cooling systems of locomotives equipped with a hydrodynamic brake, the large amount of heat to be dissipated must be taken into account. Known vehicles with hydrodynamic brakes are z. B. the locomotives of the 218 series or the 612 series railcars of Deutsche Bahn .

In industry, fluid couplings are used as a starting aid, as a control clutch for stepless speed control and as a brake (retarder). Mineral oil or water are usually used as the operating medium.

Turbo couplings with constant filling are used to gently accelerate large masses such as crushers. Due to the slowly building up circulatory flow between the pump and turbine wheel as a result of the accelerating equipment after starting the drive machine, the same is gently accelerated to the nominal speed. However, there is always a slip between the drive machine and the driven machine. If a stepless speed adjustment is required during operation, a turbo coupling with a variable filling quantity (turbo regulating coupling) is used. Here, the clutch filling can be changed, for example, using a scoop tube, thereby controlling the torque transmission or the speed. For high- speed machines such as compressors or feedwater pumps , geared variable-speed couplings, turbo couplings with upstream or downstream gearboxes in the same housing are used. With geared variable speed couplings, stepless speed control on prime movers with an output of up to 80 MW is possible.