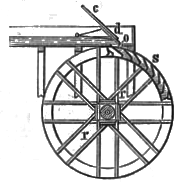 A prime mover is a machine that converts a form of energy such as chemical, thermal, or electrical energy into mechanical work by executing movement against a force. Power machines are mainly used to drive machines such as pumps , blowers , compressors and tools, as well as for vehicles . Often they are also referred to as a motor (from Latin movēre , mōvī , mōtum , 'move'). They are differentiated, for example, according to the energy source used:

Electrothermal drives belong to the group of thermal fluid power machines ( heat engines ) and use electricity only as a heat source.