The title of this article is ambiguous. Further meanings are listed under machine (disambiguation) .

A machine ( borrowed from French machine , from Latin machina , this from ancient Greek μηχανή mēchanḗ , German 'tool' , 'artificial device', 'means') is a technical structure with parts moved by a drive system. As technical equipment, machines are mainly used for mechanical action. In the past, the focus was on the flow of energy and / or matter. The flow of information first played a role in precision mechanical devices, but is now important in almost all machines (automation). From the point of view of a worker, attractive goals for the invention of machines were to increase their own strength, gain time, accuracy, finer machining options and manufacture identical products. The production worker was also relieved of physical and mental work through machines and devices. These modern tools mainly take on routine and dangerous work. 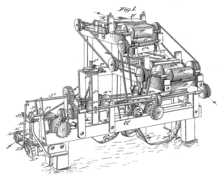 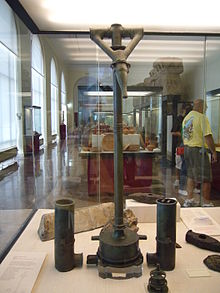 Machines are always human products. (. See "Due to the ancient meaning Deus ex machina "), the machine was up to the modern times mainly as a means to an illusion - understood and only secondarily as an aid - creating unnatural, that is impossible effects.

During the Renaissance , a more precise concept of mechanisms developed : Mechanisms are complexes of components in which the movement of one element inevitably causes the movement of other elements. They usually have moving components and are considerably more complex compared to the apparatus (the ' tool ').

At that time a mechanism was primarily a work , a form of gearing that transmitted forces. Among the mechanisms which belonged kompliziertesten Grand Complication ( Large complication) in mechanical and automatic movements . The Antikythera Mechanism , an ancient artifact that simulated celestial mechanics , should also be understood in this sense .

At that time, art ( artes mechanicae ) also referred to engineering, and in the 19th century, machines powered by water or horses were called mining art . 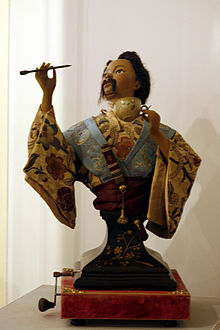 The development of classical mechanics as a scientific discipline since the Enlightenment has led to the search for the basic elements of mechanical systems, in the sense of ' atoms ', the components that cannot be further dismantled - this was already considered by the ancient Greek engineers ( Aristotle ): This is how the simple machines are defined, namely rope and rod , roller , lever , as well as inclined plane (in ancient times still the screw, but which can be modeled as a rod and inclined plane).

In technical applications, machines usually have a drive (for example a motor ) that more or less continuously supplies energy. The machines work with this energy, which is why they are called working machines. The motor and other machines that convert various forms of energy into mostly rotating kinetic energy are called power machines .

Because the machine, if it has a continuous drive, divides work processes into a sequence of repeatable steps, its meaning overlaps with that of the automaton. It can replace (unpredictable) actions of humans or animals with activities that can be planned (an algorithm ). The αὐτόματος automatos , "who moves of his own volition", is originally a likewise illusionistic toy built on wheels - but it corresponds to the mechanistic models of the Enlightenment, which also tries to explain nature as an inevitable, determinable sequence.

Development of the definition in industrialization

19th century:
Connections of resistant bodies, which are set up in such a way that by means of their mechanical natural forces can be forced to act under certain movements (Reuleaux).
The connection of the body to a machine does not exclude all and every movement, but only prevents movements that are unnecessary and disruptive for the purpose of the machine, so that the purposeful movements remain as the only possible ones.

End of the 20th century:
In Europe , the machine is defined in the Machinery Directive .
As a result of electronization and automation in the 20th century, the term machine has expanded to include computer programs that are used to simulate machines.
In engineering, however, a distinction is usually made between mechanical machines and electronic machines .

The European Machinery Directive as a definition aid

With the help of Directive 2006/42 / EC (Machinery Directive) , a uniform level of protection for accident prevention for machines when placed on the market within the European Economic Area (EEA) as well as Switzerland and Turkey is regulated. It also defines what is to be considered a machine:

However, “machines whose only source of power is directly applied human labor, with the exception of machines that are used to lift loads, do not fall under the scope of the Machinery Directive …” ( 2006/42 / EC Article I Paragraph 2a). This limitation of the term thus excludes many devices that are machines in the everyday sense of the word. Further exceptions and additions are defined in the regulation text.

Examples, with the associated requirements of the EU directives as a result: 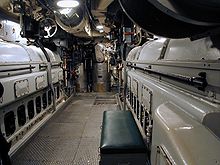 Engine room of a ship

Machines in mythology and literature