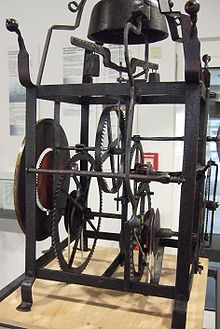 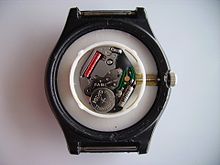 Electromechanical wrist watch movement; clock quartz at the bottom right , button cell (battery) to the left. Upper right oscillator and clock divider (under black seal) and upper left the coil of the Lavet stepper motor with red enamelled wire for driving the hands

Mechanical clockwork in an aircraft cockpit , chronograph Molnija AChS-1 of the MiG 25 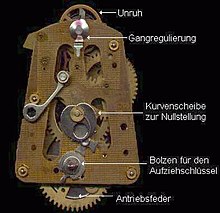 Mechanical clockwork of a stopwatch

The entire mechanism inside a clock is called a clockwork . It ensures that the time is displayed correctly.

There are movements in purely mechanical and electromechanical form with more or fewer gears . Electronic clocks have no wheels and only a minimum of moving mechanical parts. Digital watches with an electro-optical numeric display (except for oscillating crystals ) no longer have any moving parts.

In the elementary watches as the hourglass , the sundial and the water clock , the term movement is not applied.

A purely mechanical clockwork is most clearly visible on a large historical clock . It ranges from the energy storage device (mostly a weight drive) to several gear transmission stages ( gear train ) and an escapement to the gear regulator (mostly a pendulum ). A branch leads from the gear transmission to the pointers located outside. With the exception of the hands, this so-called pointer mechanism is also located inside a watch, but is often - like the winding weights - not counted as part of the movement.

Mechanical clockworks are multi-stage gears whose wheels rotate at a constant angular speed . They get their drive energy from a mechanical energy store. The stored potential energy is released in a controlled manner and converted into a rotary movement of the display device (mostly pointer axes).

Components of the mechanical clockwork

Every mechanical clockwork consists of one or more gear trains. The main gear mechanism is called a mechanism that every clock mechanism must have. The clockwork can also have one or more additional wheelworks , but these are controlled by the movement .

Mechanical movements are driven as follows:

To avoid overwinding, spring mechanisms often have a Maltese locking mechanism that limits the number of rotations. In contrast to the rest of the spring, which is made of hardened steel , the spring's start and end loops are soft-annealed - although breaking is normally only possible through the application of extreme force, older spring material tended to break in the area of ​​the inner, smaller bending radius of the spring Transition to the hardened spring.

Automatic wristwatches have a spring bridle that lets the mainspring slip through when fully wound.

An atmospheric clock draws the winding energy for its spring mechanism from fluctuations in temperature and air pressure.

Simple movements only have an hour and a minute hand above a dial . In more elaborate movements, functions such as second hand , date display , day of the week , alarm functions , stop watch , moon phase, etc. are added. There are also other types of display, such as only one (hour) hand in the case of the single-hand watch or the display using rotating disks under a cutout in the case of the disk watch . Additional indications are achieved through the use of kadratures with additional complications .

The striking mechanism is an independent mechanism in a wheel clock, with the help of which the time is also given acoustically. The acoustic signal is generated by means of a round gong, rod gong, church bell , whistle , gong or music box mechanism. 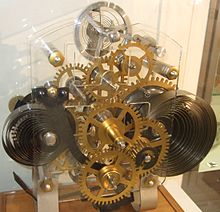 The alarm function is set with another pointer (alarm pointer). In purely mechanical alarm mechanisms, the alarm pointer usually sits on a control disk (alarm dial). The hour tube has an additional elevation (alarm trigger cam) and is pressed forward against the control disk by a flat spring (alarm trigger spring). When the wake-up time is reached, the elevation of the hour tube falls into the associated depression of the control disc and the hour hand jumps visibly closer to the minute hand. This movement is caused by the alarm trigger spring. The loose end of the alarm trigger spring usually moves further than the hour hand itself due to the leverage and releases the alarm mechanism or triggers an electrical contact via this movement. Via a bevel on the alarm trigger cam or the recess of the alarm setting wheel, the hour tube is moved back into the normal position against the force of the flat spring as the movement of the hour hand progresses. With simple alarm clocks, this typically happens in 30 to 90 minutes. Only when the loose end of the alarm release spring blocks the alarm mechanism again, the alarm mechanism can be rewound without running down again immediately. Due to the fact that the hour hand rotates 360 ° in 12 hours, the alarm usually triggers twice in 24 hours. There are also seldom alarm clocks with a 24-hour alarm dial that only wake up once every 24 hours. With digital alarm clocks, the distinction is common after 24 hours.

Clocks with an alarm function usually have a second energy store (usually spring mechanism) for the alarm function. Special case is z. B. the use of a spring balancer both for the movement and for the alarm. This design is easily recognizable in that there is only one single elevator option, which simultaneously winds the movement and alarm mechanism.

Mechanical movements according to size

In small, high-quality watch movements, precious stones are used as bearing stones for moving parts, as there is less friction between steel and stone than between two steel components. This reduces the wear and tear and increases the accuracy through even power transmission. Synthetic stones such as rubies are used today .

In contrast to a small portable watch, the term “ large clock ” is a general term for all larger, stationary watches. Movements for such watches, depending on their function, can be quite different.

Movements for large public clocks on buildings such as town hall, schools, castles, churches or monasteries.

Among other things, electric motors or electromagnets were used for the automated winding of conventional clockworks, u. a. also for tower clocks .

The clock generator of synchronous clocks is a synchronous motor that drives the display elements, numbered wheels or falling plates via a gear. The daughter clocks in clock systems work in a similar way, receiving impulses from a mother clock and thus driving a stepper motor or synchronizing their motor-driven hands. Energy- saving motors such as the Lavet stepper motor are used in battery-operated watches .

In electronic clockworks, a partial function or the entire function of the clockwork is implemented electronically.

While with a magnetic or motorized winding the power transmission in the clockwork, as in the conventional mechanical clock, is transferred from the energy storage via the pointer mechanism to the escapement (oscillation system) and thus very high demands are placed on the accuracy and strength of the gears, with direct electronic drive of the oscillation system this is the case Energy flow reversed. This made it possible to further simplify the gear train and save energy.

Battery movements can be electromechanical as well as electronic. Today almost only quartz movements are used. The accuracy can be improved by integrating a radio clock , which is continuously synchronized with the signals from time signal transmitters .

Before it was possible to manufacture quartz movements inexpensively, there were processes such as blocking oscillators , which achieved acceptable running times and accuracy in a compact design and with battery operation.