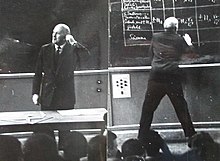 He is considered to be one of the founders of modern precision equipment technology . His special merit was the merging of traditional precision mechanics with rapidly developing electronics at the Institute for Electrical and Mechanical Precision Device Construction, which he founded in 1953 at the Faculty of Electrical Engineering at what was then the Technical University in Dresden.

Hildebrand studied precision engineering at the Technical University of Dresden. After obtaining his diploma in 1931, he worked here as a private assistant in the field of precision mechanics at Werner Kniehahn . In 1934 he took on the role of development engineer at Siemens & Halske AG Berlin and then moved to the Seidel & Naumann company in Dresden, where, after a short training period, he worked as chief designer until 1946. From 1940 to 1944 he worked part-time as a lecturer at the former engineering school in Dresden. In the following years he received various teaching assignments, including at the Technical University of Dresden. In 1950 he received his doctorate at the TU Berlin (Charlottenburg) under Hermann Alt in the field of typewriter drives and then worked from 1952 until his retirement in 1968 as a professor for precision engineering at the TU Dresden. His institute for electrical and mechanical precision engineering soon developed into an internationally recognized training center for a large number of qualified engineers and a scientific school of precision engineering, into which he also integrated electronics technology. Several of his students, such as Heinz Töpfer and others, became university teachers themselves and continued to develop the field of science he founded.