Seidel & Naumann was initially founded in Dresden in 1868 by entrepreneur Karl Robert Bruno Naumann zu Königsbrück . After the businessman Erich Seidel invested in the company in 1869, his name was placed in front of the founder's name in 1870 and was retained in the company name even after the latter left in 1876. Within a very short time, the company rose to become the largest sewing machine and typewriter manufacturer in Germany.

After completing his years of traveling, Karl Robert Bruno Naumann returned to Dresden and founded a small workshop for precision mechanics on August 5, 1868 with his own savings of a few 100 thalers. In the following year, Naumann was already producing Wheeler-Wilson sewing machines based on an American patent. In 1869 the merchant Emil Seidel invested 25,000 thalers in the company, which since 1870 has operated under the name "Seidel & Naumann". Although Seidel left in 1876 with a severance payment of a quarter of a million Reichsmarks, the company name remained. In the course of the company's history there have been several changes in the focus of production. In 1872 Naumann was the first in Germany to produce high-armed sewing machines based on the more modern Singer principle and to improve them more and more. 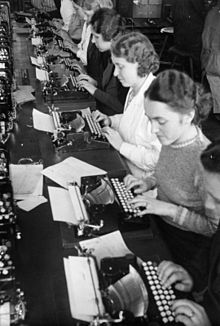 Motorcycle Germania built in 1901 by Seidel and Naumann in the Museum for Saxon Vehicles - demonstrably one of the three oldest motorcycles in Germany.

In 1883 Naumann acquired a building site outside the densely built-up city center and built a large factory on Hamburger Strasse. Three years later the company was converted into a stock corporation, the "sewing machine factory and iron foundry formerly Seidel & Naumann". During this time the company employed 1000 workers who produced 80,000 sewing machines a year. The new building provided space for new products. So around 1892 the mass production of bicycles of the "Germania" brand began. Advertisements also testify to "Naumann's bicycles" under this independent name. There were also speedometers for locomotives and, since 1887, jukeboxes. The office typewriters of the “Ideal” brand then achieved worldwide recognition, which could be equipped with tabs and different keyboards according to customer requirements . From 1900 office typewriters also went into mass production. In 1901, Laurin & Klement motorcycles of the "Germania" type with single and V-twin-cylinder engines with outputs of 2.5 to 6 hp began under license . The plan to produce their own motor vehicles was abandoned after Naumann's early death in 1903. A source published in 1908 mentions in various places that Germania motorcycles and luggage tricycles were still manufactured under the license of Laurin & Klement at this time.

At the time of the founder's death, the company employed around 2,500 people. Bruno Naumann created a number of social institutions for his employees: a factory health insurance fund for long-term employees and their relatives, benefit funds for longer illnesses and deaths, disability funds and a civil service benefit fund. In the workshops there was a generous amount of basic equipment with cloakrooms, toilets, washrooms and dining rooms.

Company history after the death of the founder until 1945 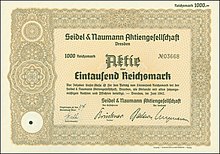 The Seidel & Naumann company was continued by its successors and was one of the most important large companies in Dresden until it was seriously damaged in air raids in 1944/45. The easily portable Erika number 1 portable typewriter, first produced in 1910 and named after Naumann's only granddaughter, became world famous. This typewriter only had three rows of keys, but the types were assigned three times. The special brand names “Bijou” and “Gloria” were used for exports to England and France. On January 28, 1910, Seidel & Naumann applied to the Imperial Patent Office for protection of the brand name "Erika" for typewriters . The entry was made in the same year on August 3rd.

Expropriation and company history after 1945

After the expropriation 1945/46 of operation changed its name, since 1951 together with the former Clemens Müller AG , as VEB Typewriter plant (s) Dresden (SWD). Belonging to VEB Kombinat Robotron (RSD) from 1979 , typewriters were produced there until 1990, mostly still under the traditional brand name "Erika". The company had up to 3500 employees and had its own company vocational school, at which around 300 apprentices were trained annually. On a smaller scale, special machines were also produced as documentation typewriters or as blind dot sheet-fed machines. From 1965 onwards certain "Erika" assemblies were manufactured in the Rechenelektronik Glashütte plant . "Robotron Erika GmbH", which was formed after privatization in 1990, ceased production in 1991 and announced its liquidation in 1992. In 2004 the trademark protection expired and in 2005 the trademark "Erika" was deleted after 95 years. The typewriters for the blind based on the Picht system, which have been registered with the patent office under the brand name "Erika-Picht" since 1975, are still produced by multi-tech gGmbH in Dresden (as of 2010).

The typewriter factory, which was located on Hamburger Strasse, was acquired by Freiherr von Künsberg after 1990 and used as the “Technical Town Hall” by the Dresden city administration from 1992 onwards. After massive allegations made in 2008 with regard to existing contamination in the ground as well as in the building itself and the completely inadequate fire protection since 1992, it finally moved out by 2010. With regard to soil and building contamination, both the city council and the public prosecutor's office determined until 2012, but without being able to prove the health risk (there was talk of deaths). From 2015, after renovation work, the building was used as refugee accommodation.

In 1905 the company manufactured a self-developed automobile . The vehicle with the model designation 34/40 PS was used in 1905 by the Herkomer competition . It is unclear whether other vehicles were made.