Mercedes is a redirect to this article. Further meanings are listed under Mercedes (disambiguation) .

Mercedes-Benz is a registered trademark for automobiles of Daimler AG . The name was created in 1926 after the merger of Daimler-Motoren-Gesellschaft ( Mercedes brand ) with Benz & Cie. to Daimler-Benz AG . In 2016, 2.08 million new vehicles of the brand were sold.

The name “Daimler” is sometimes used colloquially for a Mercedes-Benz. Although Daimler AG is contractually permitted to use the brand name for products, there is currently no Daimler AG vehicle with this name. For the history of naming rights, see Daimler Motor Company # naming rights .

Almost all types of motor vehicles are sold under the Mercedes-Benz brand :

Furthermore, the following vehicles based on the above-mentioned model groups are offered under the Mercedes-Benz brand, some of which are also manufactured by external companies:

In addition, until 1991 , tractors were produced under the name MB-Trac .

Daimler AG produces with a high degree of vertical integration , as it z. B. Steering and manual and automatic gearboxes developed and manufactured in-house. In engine construction there are a large number of series that are used in the various model groups. It is not uncommon for the same engine to be used in cars , off-road vehicles and vans, see the list of engines from Mercedes-Benz .

Sales of Mercedes automobiles since 1901 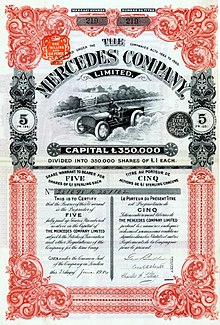 The Daimler-Motoren-Gesellschaft (DMG) founded in 1890 did not originally sell its vehicles under the Mercedes name. The brand did not emerge until the turn of the century, inspired by the businessman Emil Jellinek , who traded in Daimler vehicles from 1898. From 1899 Jellinek took part in the Nice race week under the pseudonym Mercedes (based on the name of his daughter Mercédès Jellinek ). Although "Mercedes" was only used as a driver's name at that time and not yet as an automobile designation, the name became known in connection with DMG. In 1900 Jellinek agreed to manufacture the new, high-performance "Daimler-Mercedes" engine, which was the first time the name Mercedes was used as a product name. At the same time he became a sales partner for Daimler cars and engines and ordered 36 vehicles for a total price of 550,001  marks (according to today's value about 3.82 million euros ), as well as a few weeks later a further 36 Daimler cars with 8 hp engines.

After several of these Mercedes vehicles (the name was now also used for the cars) drove successfully at the Nice Race Week in 1901, the level of awareness of Mercedes grew enormously; in September 1902 the name "Mercedes" was legally protected for DMG. The Mercedes star was registered as a trademark in 1909 and has also been used as a radiator symbol since 1910, without a surrounding ring in the first few years.

Daimler-Motoren-Gesellschaft merged in 1926 under the leadership of Deutsche Bank with competitor Benz & Cie. , whose motor car drove under the name "Benz" as early as 1886, and formed Daimler-Benz AG . This resulted in the new brand name Mercedes-Benz , which was protected in the same year with the Mercedes star logo .

In the 1930s, the legendary Silver Arrows shaped the brand image in competition with Auto Union . Mercedes-Benz manufactured upper and luxury class models in the passenger car sector and was able to take a leading position here. In the post-war years, the production of cars was only resumed in 1947. The previous numbers were quickly reached again. The products were also successful worldwide thanks to further production facilities abroad. The US market, which had become Mercedes-Benz's largest foreign market since the early 1960s, was of particular importance. It was not until the end of the 1980s that Mercedes-Benz faced serious competition in Europe with BMW and later with Audi, as well as with Lexus on the US market . Despite this, Mercedes-Benz has successfully maintained its position on the world market and recorded record sales in 2012 and 2013 (with 1,461,680 automobiles sold). Aero engines were also produced at times under the brand name Mercedes-Benz.

Development of the logo

Mercedes-Benz has been involved in motorsport for a long time, including Formula 1 . In the 1930s, Mercedes achieved great success with the “ Silver Arrows ” under Alfred Neubauer . After the war, Juan Manuel Fangio won the Formula 1 World Championship in a Mercedes-Benz W 196 in 1954 and 1955 .

1955 ended Daimler-Benz's commitment in motorsport first after the 24-hour race at Le Mans for today severe accidents (84 deaths) occurred in the motor racing history. It wasn't until 1988 that the company returned to racing at the factory. In Formula 1, Mercedes-Benz and McLaren formed the McLaren-Mercedes team from 1995 . The engines were manufactured by Ilmor or the Mercedes subsidiary Mercedes-Benz HighPerformanceEngines . In 1998 and 1999 Mika Häkkinen and 2008 Lewis Hamilton became Formula 1 world champions in a McLaren-Mercedes.

On November 16, 2009, Daimler AG announced that it would take over 75.1% of the team shares in Brawn GP , which competed for the first time in the same year and had won the Drivers 'and Constructors' World Championship with Mercedes engines. Since then, the racing team has competed under the name Mercedes Grand Prix (until 2011) and Mercedes AMG F1 Team (since the 2012 season) as a Mercedes works team under the German flag. The official seat of the team is the Daimler headquarters in Stuttgart. The team operated like its predecessor Brawn GP from Brackley, England. In the course of acquiring Brawn GP, ​​Mercedes-Benz ended its exclusive partnership with the British McLaren Group and sold its 40 percent stake in it. 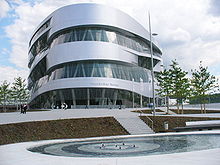 The Silver Star, a roller coaster with the theme of Mercedes-Benz

Several sports and event venues bear the name of the brand. Two of them are operated by the Anschutz Entertainment Group (AEG).

Timeline to 1945
Timeline since 1945
Brand names of Daimler AG