Play media file
A testimonial from the Wikimedia Foundation for Wikipedia 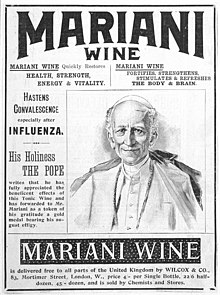 Testimonial ( english testimonial "evidence", "Reference") referred to in the advertisement in the English concrete advocacy for a product, service, idea or institution by a person who is the target group is mostly known and their performance credibility of the advertising message increased ( → sales promotion ).

In German, the testimonial can also be an advertiser who speaks out in favor of a brand or a product (" advertising ambassador "), for example for the quality and usefulness and / or the value of a product. This can be a real (living or deceased) person or a fictional figure ( advertising figure ). Typical testimonials are celebrities, experts, employees or stylized users. Well-known fictitious testimonials in German-speaking countries are or were the insurance agents Mr. Kaiser and Klementine .

With testimonials, the affinity or popularity and thus the credibility or trust of a person known to a target group is used to emotionally reinforce the advertising message for a product, service, institution or conviction. The application of specific features or services is often of secondary importance.

The testimonial is used in different ways: it can help interchangeable consumer goods become more serious or arouse interest in abstract products and complicated issues. The link between people and a brand can be designed with varying degrees of intensity. While an eyecatcher that is usually only used once does not influence an advertised brand or only influences it to a minimal extent, a testimonial can have a lasting impact on a brand in the event of long-term cooperation and corresponding attractiveness, expertise or trustworthiness. This effect is even stronger if a fictional character or a real person can be found in the brand logo and / or brand name, as is the case with Uncle Ben’s and Meister Proper, for example .

Usually testimonials are placed in the press, radio or television. There are no formal requirements; Since the commitment to the product is the central statement, an interview situation is often chosen. A variety of goals are pursued with prominent testimonials. This includes an increased and longer-lasting focus on the means of communication and the associated achievement of better memory values. In addition, celebrities underpin the evidential value and bring about image and personality transfer effects on the brand. Care is taken to ensure that the product fits the person's image . Testimonials with celebrities are also referred to as celebrimonial ( suitcase word from English celebrity prominent (r) and English testimonial ). Testimonials from musicians are usually regulated in the context of endorsement contracts.

In the case of characters and avatars , a distinction can be made between advertising figures with brand names and proper names. The Michelin man, for example, bears the name Bibendum, while the cartoon character of Salamander is known as Lurchi to this day . But there are also combinations of both, such as Robert T-Online (2000–2003). In addition, external brands can be associated with your own brand, for example in co-promotions or licensing deals. A few years ago, for example, the energy supplier EnBW used the cartoon characters Tom and Jerry to advertise their own electricity brand.

In the case of little-known actors, in addition to people with brand names or proper names, actors who are not specifically identified are often used.

Advertising with celebrities is still considered the classic form of testimonial advertising . Their share in TV advertising has increased significantly in recent years and has quadrupled since the mid- 1990s . While the figures estimated for the USA fluctuate between 20 and 25 percent and a constant share of around 20 percent has been assumed for England for years, relatively reliable data are available for Germany. According to them, prominent testimonials can be seen in almost 15 percent (2011/2012) of all television commercials today. Most of the prominent testimonials are external to the company, but sometimes well-known founders and / or managers also appear as testimonials and advertise their own company.

Functions that a testimonial for a brand can fulfill:

The conditions under which a testimonial works are described by the match-up hypothesis : A testimonial will increase the purchase probability for a brand if the brand is similar in its personality traits to the person or figure who advertises, i.e. a high level of so-called brand fit. This mode of action was reproducible in several experiments.

However, the match-up hypothesis does not provide an explanation for why a high brand fit is effective. Further research has shown that similarity between brand and advertising character reinforces a feeling of fit, which in turn has a positive effect on the likelihood of purchase. A probable explanation is that the similarity is a substitute heuristic: Because the actual product use cannot be observed in most testimonials, advertising viewers instead fall back on the plausibility in the form of the perceived fit.

An additional sociological explanation for the effect of prominent testimonials is provided by the market research institute Dr. Grieger & Cie. According to this, the attitude of the audience towards the prominent person in the testimonial plays a role. Fans of a celebrity buy the advertised product more often after a testimonial, whereas people who are hostile to the celebrity or who do not know them are less likely.

The success of the mission depends heavily on the credibility of the testimonial used. For example, if the advertising does not appear credible and is therefore poorly received by customers because the product and testimonial do not go together, this is referred to as the Pinocchio effect . There is also the risk that recipients will remember the advertising and testimonial, but not the brand being advertised. This so-called vampire effect occurs when the testimonial is too well known compared to the brand being advertised. Misconduct in the private sphere can quickly affect the image of the advertised product, for example. Furthermore, credibility decreases if a testimonial advertises several manufacturers at the same time or in short succession. For example, Franz Beckenbauer first advertised E-Plus and shortly afterwards for O 2 . In addition, FC Bayern Munich , for which Beckenbauer temporarily served as club president, was also sponsored by Deutsche Telekom .

Conversely, the success or failure of a product can also affect the image of the person acting as a testimonial. For example, Manfred Krug apologized for appearing in numerous commercials for the T-share of Deutsche Telekom AG after the share failed to meet expectations.

In Germany , according to the wording of the Heilmittelwerbegesetz (HWG), until the amendment of October 19, 2012, it was forbidden to send testimonials outside of specialist circles to advertise drugs, procedures, treatments, objects or other means (Section 11 (1) 11th HWG) ... as well as medical devices (§ 11 (1) last sentence). However, the ECJ had already practically suspended this general ban in 2011, but not explicitly also for medical devices, so that the Federal Court of Justice had to refer to Article 5 of the Basic Law in its ruling in the meantime to justify why the wording of the HWG was not applicable. The change to the HWG meant that the general ban was restricted to abusive, repulsive or misleading representations of statements relating to medicinal products outside of specialist circles. Up to now it was also forbidden to advertise drugs with professional testimonials outside of specialist circles (Section 11 (1) 1. HWG). This restriction no longer existed on October 19, 2012.