An endorsement ( Engl. To endorse = intercede support ) or Endor Server support is known a contractual obligation of the target group, often famous person who recommends a particular product or publicly used at least himself.

This agreement is concluded with a specific company ( supplier ), usually a manufacturer of musical instruments or sports equipment. 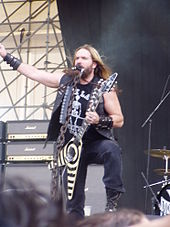 Similar to the testimonial , the musician advertises the products of a specific instrument manufacturer by using them for live performances and studio recordings. Mostly, the advertising posters for tours and on the covers of the sound or image carriers for the respective instruments are advertised. The manufacturer advertised in this way expects a particularly credible and far-reaching advertising effect . In return, the advertising musician receives a fee or is provided with instruments from the manufacturer free of charge. In contrast to this trend, some artists emphasize their independence from manufacturers by deliberately masking the company names on their instruments or otherwise making them unrecognizable.

Many manufacturers bring special musical instruments or at least special models (so-called signature models ) onto the market under the name of a certain artist. Sometimes such models are developed in collaboration with the musician concerned. This procedure is particularly widespread among manufacturers of guitars and drums who, in addition to the actual instruments, often also offer accessories such as drumsticks or guitar strings in signature variants. Famous examples in this context are the Gibson Les Paul , or signature musical instruments for Steve Vai ( Ibanez JEM ) or Eric Clapton ( Fender Stratocaster ).

Sporting goods companies have always advertised their products with the help of wearers of certain sportswear or the like. For a long time only professional athletes were suitable for articles outside of sport, since such advertising was forbidden to organized amateurs. With the release of the amateur conditions in 1981, there was a sharp increase in product endorsement by top athletes and trainers. As a rule, it is assumed that this only works if the athlete himself has become a brand, especially since a mutual benefit then arises because the advertising also advertises the athlete. Through scandals, e.g. However, for example in connection with doping , advertising with active athletes carries a risk. How great this risk is depends on the product. So has z. For example, the Festina watch brand increased its sales significantly as a result of the Festina scandal at the Tour de France , as the cycling stable was further intensively promoted ("Festina, the watch that won't let you down even in difficult times"). B. the insurance company that had advertised with Lance Armstrong , the money was refunded through legal process. Which athlete personality fits which product is controversial in the literature, as the sport itself is also a decisive factor. To advertise the sport of boxing with a “doctor” Klitschko or “gentleman” mask shows that such dissonances can expand the spectrum of advertising opportunities.

In order for the International Financial Reporting Standards (IFRS) issued by the private IASB to be legally binding in the EU, they must be endorsed by the European Commission .