The E-Plus Mobilfunk GmbH was a German mobile operator and part of the E-Plus Group . It belonged to the Dutch KPN Group from 2000 to October 1, 2014 , before it became part of Telefónica Deutschland Holding . At this point in time, E-Plus was the third-largest mobile network operator in Germany with around 25.5 million customers.

Many brands and companies of the E-Plus Group were merged into Telefónica Germany GmbH & Co. OHG after the takeover. This also included E-Plus Mobilfunk GmbH, which was divided into the sub-areas E-Plus Mobilfunk in Düsseldorf and E-Plus Service in Potsdam , but also independent subsidiaries such as Simyo or Blau Mobilfunk . As part of the takeover by Telefónica, Yourfone was sold to the wireless service provider Drillisch on February 1, 2015 . Major customers of E-Plus were taken over by O 2 Business. Today there is only E-Plus Service GmbH based in Düsseldorf.

E-Plus was also a member of the European Movement Germany .

History and chronology of the company

Logo of the former E-Plus Group

The company was founded in 1992 as E-Plus Mobilfunk GmbH and in 1993 received a mobile radio license for DCS 1800 (E1 network) from the then Federal Post Minister Wolfgang Bötsch (CSU). The license holder was a consortium around E-Plus, the main shareholders of which were VEBA Telecom , RWE Telliance , Thyssen Telecom and BellSouth .

Logo of the former Simyo brand

Since 2005 at the latest, E-Plus has been pursuing a focus strategy on the mobile communications market, i.e. concentrating its offer on services that are particularly popular and sold at comparatively low prices. Innovative products were only offered with a delay if the success of competing companies indicated that investments in them would be profitable. At E-Plus, this strategy resulted in cheaper tariffs for telephony, and the aim was to achieve price leadership in this area. The UMTS network was gradually expanded to cover new areas and expand capacities. Furthermore, the GSM network was expanded to include E-GSM throughout Germany , so that network coverage had greatly improved.

E-Plus operated nationwide cellular networks in the E-GSM, DCS-1800, UMTS and LTE standards. The GSM network had been in operation since 1994. At the end of 2013, 19,316 GSM base stations and 12,280 UMTS base stations including cellular repeaters were still in operation. According to its own information, E-Plus reached 99.9 % of the population with its GSM network, 84% with EDGE and 80% of the population with its UMTS network.

The company's own UMTS network has been set up since 2004. In addition to normal locations of medium height, such as smaller masts and house roofs, so-called ultra high sites (UHS) were also used. This referred to antenna locations with an installation height of more than 100 meters, for example industrial chimneys or television towers. UHS allowed larger areas to be served with less investment than would normally be necessary. However, this construction method also reduced the capacity, as despite the larger area, the number of calls put through at the same time remained the same. The UMTS network partly contained technology from the former Mobilcom network , the expansion of which was stopped before it went into commercial operation. Mobilcom sold a large part of its technology in 2003 for 20 million euros to E-Plus.

In early 2006, the company built E-GSM base stations on top of or converted existing DCS-1800 stations into E-GSM / DCS-1800 dual-band stations. The E-GSM frequencies were assigned to the two network operators E-Plus and O 2 by the Federal Network Agency in order to be able to supply rural areas better and more efficiently and to improve reception within buildings. This should give the network operators previously only broadcasting on 1800 MHz equal technical opportunities.

The GSM network supports the GPRS service for packet-oriented data transfer. In almost all regions, the EDGE data service could also be used for surfing, which resulted in faster data throughput than with GPRS.

Voice transmission in the GSM network was implemented with the Adaptive Multirate Codec (AMR) and with older cell phones with the Enhanced Full Rate Codec (EFR).

In a study of the data transmission rate in German cellular networks by the Stiftung Warentest in June 2011, E-Plus performed worst. Also in the network test of the magazine Connect in 2011, E-Plus came last among all eleven network operators in Germany, Austria and Switzerland.

In January 2013, E-Plus announced that it would be the last German mobile network operator to implement LTE by the end of 2013.

From mid-January 2015, network roaming between O₂ and E-Plus was also tested. In February 2015, Telefonica announced that it would enable national roaming for all customers in mid-April 2015. The aim was to close white spots in network coverage and improve data services in areas not served by LTE.

On December 1, 2015, Telefonica Deutschland announced that the merging of the GSM and UMTS networks will begin in January 2016 and that this should be completed by the end of 2017 [obsolete] . Telefónica switched off the LTE network from E-Plus at the end of June 2016.

E-Plus was the network provider for several mobile radio discounters such as Aldi Talk , Blau Mobilfunk , MTV Mobile, Ortel Mobile GmbH and simyo , as well as the MVNE Sipgate Wireless and formerly Telogic. After taking over E-Plus, Telefónica took over the cooperation with the providers as well as looking after the customer base.

The E-Plus Group supported the “iCHANCE” social campaign by the Federal Association for Literacy and Basic Education . "ICHANCE" is a multimedia-oriented campaign with the aim of breaking down prejudices against (functional) illiterate people and encouraging people with basic education needs to take advantage of learning opportunities such as reading and writing courses.

In June 2008 it became known that E-Plus - similar to O₂ and Vodafone - considerably restricted the accessibility of the phone numbers of certain voice chat systems. These numbers are normal landline numbers that can be called free of charge within the framework of landline flat rates and which in practice cause a high volume of calls. In contrast to O 2 , E-Plus not only limited the volume of calls, but also completely blocked the numbers concerned.

In February 2009, these barriers were extended to include some providers of business conference calls. Certain providers of calling cards , whose numbers could be used to make calls abroad and to special numbers more cheaply, were also affected . The blocking made it impossible for customers to use these services, but this was covered by the terms and conditions. The fixed network flat rates of most mobile network providers usually exclude "service use" via fixed network numbers. The Federal Network Agency also does not plan to offer bulk services on end user connections.

Logo of the former E-Plus brand Base 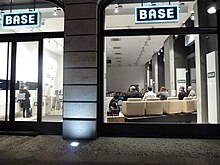 E-Plus Retail GmbH , founded in 2011, managed the store, which consisted of its own branches , franchisees and independent dealers and ran the Base and MTV Mobile brands . At the beginning of December 2016 it was renamed Telefónica Germany Retail GmbH . MTV Mobile was also discontinued. It was based in Düsseldorf and was headed by Marcus Epple.