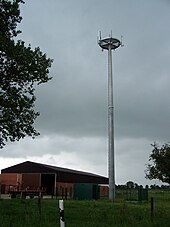 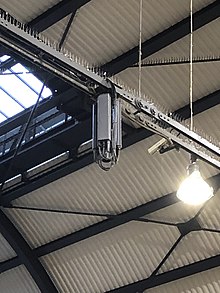 In Germany currently has three mobile networks are operated: According to the network operator to the Federal Network Agency in the first quarter of 2019 the network of Telekom Germany about 44.7 million, the Vodafone about 47.9 million and that of Telefonica Germany about 45.1 million Attendees. In total, there were a little over 137 million mobile phone contracts in Germany.

The oldest networks still in operation are the D-Netz and the E-Netz , which were introduced in Germany in 1991 and 1993 and are based on the GSM standard. At the time, voice transmission was the most common form. In the mid-1990s, however, data transmission gained in importance and required a modernization of GSM . The GPRS standard was developed and introduced for this purpose . The mobile switching network is expanded to include the capability of packet-oriented data transmission , but the radio network is not changed. Finally, the introduction of data-optimized 3G networks aims to increase data transmission rates (see Mobile Internet ) and also eliminates capacity problems in voice transmission. Expanded functionalities, for example in the multimedia area , will follow with the expansion of the 3G networks. The most important 3G standard is the Universal Mobile Telecommunications System (UMTS). With the market launch of “ smartphones ” that increasingly support data applications, the capacity requirements of the networks increased further, which led to the development of the Long-Term-Evolution-Standard (LTE). LTE only uses data transmission and in this respect differs from the older networks that also use circuit switching.

Cellular antennas on the horse's head

Like the landline network, cellular networks are divided into a core network and several access networks . The function of the core network is to connect the individual access networks, which enable the end users to access the network. The main distinction between cellular and landline networks is the access network, which sets up wireless communication links in cellular networks and thus ensures the mobility of the participants. The access networks are usually radio networks and are often referred to by their English term, Radio Access Network (RAN) . Depending on the standard, there are also other components and subnets that are supposed to guarantee the functionality of the services .

The separation adopted from the fixed network is most pronounced in the GSM system. The base station subsystem (BSS) , which consists of the base stations , provides all functions that are necessary for the connection between the network and mobile subscribers and thus corresponds to the classic access network. The Network Subsystem (NSS) then coordinates the individual BSS. It contains all the components for switching telephone calls and therefore corresponds to the core network. The third component of the architecture is the Intelligent Network Subsystem (IN) , which contains databases that provide additional services. This includes, for example, the administration of prepaid services. 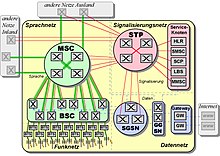 Basic structure of a cellular network based on the GSM standard

GPRS extends GSM to include the ability to transfer data. Both systems use the same base stations so that no changes have been made to the access network with the exception of a new software version. However, the core network has been expanded to include the ability to set up packet-switching communication links. This enables flexible bandwidths and thus improves the efficiency of the transmission capacity of the channels . For this purpose, the network was given the Packet Control Unit (PCU) to reserve the time slots in the base stations, the Serving GPRS Support Node (SGSN) to route the data packets between the individual radio networks and the Gateway GPRS Support Node (GGSN) to connect the cellular network added to the internet .

UMTS represents the further development of the GSM / GPRS architecture and was also designed for data transmission from the start. At the beginning the core network was hardly changed and only adapted by means of a software update. The structure of the access network is, however, a new development and is called UMTS Terrestrial Radio Access Network (UTRAN).

In contrast to GSM / GPRS, UTRAN does not use a multiplex method for data transmission, but assigns the signals to the participants via individual codes. Later, new architectures such as the Bearer Independent Core Network (BICN) were developed and implemented in the core network , which brought together the previously separate transmission of voice and data connections in a common IP- based transmission method .

With LTE , the classic methods of signal transmission have been replaced by packet switching and data transmission. A separate voice transmission no longer exists. At the same time, the hierarchical structure has been flattened. Only the actual data traffic is routed through the access and core network, support services such as mobility management or paging are taken over by the Mobility Management Entity , which communicates with both the access network, which is called LTE evolved UTRAN (eUTRAN), and the core network .

Cellular networks are to be assigned to the communication networks and are primarily used to transmit messages . The mobility of the participants makes signal transmission more difficult compared to other networks such as the fixed network. Hence, there are some specific processes that make mobile communication possible. These include transmission over the air interface, mobility management , paging or handover . Depending on the architecture and technology, these functions are provided by other assemblies and are sometimes organized differently ( → see the sections on the architectures above ).

If a network fails, many people are often affected. Some major cell network outages in Germany are listed below:

Plans to shut down cellular communications

The police in Saxony-Anhalt can require any service provider within the meaning of Section 3 No. 6 TKG to prevent communication connections if this is to avert a current danger to the existence or the security of the federal government or a state or to life, limb or Freedom of a person is required.