In contrast to the circuit-switched (English circuit switched ) data service CSD is GPRS packet-oriented. This means that the data is converted into individual packets at the sender, transmitted as such and reassembled at the receiver.

Bernhard Walke and Peter Decker are considered to be the inventors of GPRS .

If GPRS is activated, there is only a virtual permanent connection to the remote station (so-called always-on operation ). The radio room is only occupied when data is actually being transmitted, otherwise it is free for other users. Therefore, no radio channel needs to be permanently reserved for a user (as with CSD ). That is why the costs for GPRS connections are usually calculated according to the amount of data transferred and not according to the duration of the connection. Of course, the individual contract conditions are decisive.

The GPRS technology enables in combining all eight GSM - time slots of a channel in theory, a data transmission rate of 171.2 kilobits per second. In practical operation, however, the number of usable time slots within a frame is limited by the capability of the mobile station ( multislot capability ) and the networks. On the market (as of 2008) there are multislot Class 12 devices with a maximum of four time slots each in the downlink and in the uplink (but at the same time a maximum of 5 time slots). The achievable data transmission rate is - depending on the coding scheme used (depends on the signal and noise ratio) and the number of time slots allocated depending on the network load - up to 53.6 kbps (with 4 time slots and CS-2). This corresponds roughly to the speed of a V.90 telephone modem.

There are 3 different classes of end device that indicate the basic capabilities of a device. The device class is indicated with a letter:

Since around the year 2000, many cell phones have supported GPRS, for example for viewing WAP pages. The Multimedia Messaging Service (MMS) is also based on GPRS. Often a computer or handheld can also be connected to a GPRS-capable mobile phone in order to give it full, albeit narrow-band, Internet access. The mobile phone then acts as a modem .

GPRS is also particularly suitable for telecontrol tasks . As a rule, only a small bandwidth is required here, the transmission speed plays a subordinate role. The greatest advantages of GPRS in the area of ​​telecontrol are the network coverage and the availability of GSM, as well as the lower investment compared to other transmission technologies.

Another application is the location of vehicles and objects, in which GPRS is used for the transmission of position and telemetry data.

The GPRS data network is also used for the push-to-talk mobile service . 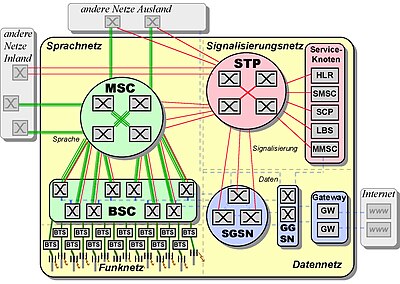 Integration of the GPRS (SGSN, GGSN, MMSC) into the GSM cellular network

The packet-switching service GPRS is based on the GSM - mobile network , but requires additional network elements: PCU ( Packet Control Unit ), the SGSN (Serving GPRS Support Node ) and GGSN (Gateway GPRS Support Node) (both of which are explained below).

The GSM guidelines as well as WPP3G (the GSM successor to UMTS ) define interfaces between the various network elements. The following list shows the most common interfaces (signaling) and connections (signaling and user data). The largely English terms are taken from the GSM Recommendations set of rules . A translation is not always meaningful.

The BSC decouples the GPRS packet data and forwards it to the responsible Serving GPRS Support Node (SGSN) via Frame Relay or IP connections. Each SGSN manages the GPRS data traffic for a large number of BSCs. If the Gb interface is routed via IP instead of Frame Relay, a BSC can communicate with a group of SGSN. One then speaks of “SGSN in Pool” or “Gb flex”. This makes the network more fail-safe and the load can be better distributed between the SGSNs.

An SGSN has a similar function for GPRS data communication as an MSC for voice communication. The SGSN organizes the booking in of participants for GPRS services, the change of radio cells and SGSN areas (GPRS Routing Area Update or GPRS Cell Reselection ) and the routing of GPRS data. An SGSN uses the following interfaces for this:

The GGSN (Gateway GPRS Support Node) establish the GPRS data connections to network-internal service platforms or to data networks. A GGSN has the following interfaces, all of which are based on IP :

The GPRS network is accessed via an access point called the Access Point Name (APN). The assignment of APN to a participant takes place via the participant data, which is stored in the HLR. A participant can use several APNs.