This article explains the term in communication technology. The computer game named after this is described under Uplink (computer game) . 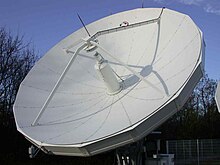 Occasionally the terms “forward direction” for the downlink and “backward direction” for the uplink are also used, in accordance with the flow analogy (see downstream / upstream ). The up link is used to up load (upload), so the data transfer in the direction of the telecommunications network, the down link , however the down load (download) from the telecommunications network.

Names of the connections between earth stations and satellite.

In computer networks , uplink refers to the connection of a concentrator ( hub , switch ) to the next concentrator.

User ports , to which end devices such as hosts , computers and printers are connected, can be differentiated from the uplink ports via which the next concentrator can be reached. Since the data of many user ports is passed on via only one or a few ( bundling , resiliency , spanning tree ) uplink ports, these are usually designed to be much more powerful. Since a network concentrator could be connected to each user port, the transition between user ports and uplink ports is fluid.

In the uplink port of a concentrator, the send and receive lines are interchanged compared to a user port. In modern devices, however, the ports are often equipped with a functionality called Auto Uplink (also known as Auto MDI-X ). These ports automatically recognize whether it is necessary to swap the send and receive lines, so separate uplink ports or the use of crossover cables are unnecessary.