The Mercedes-Benz W 06 appeared in 1926 as a derivative of the K model from the same year. It is an extremely powerful sports car with a very large six-cylinder engine and compressor . Subsequently, further developed vehicles of this type S appeared with the designations type SS , type SSK and type SSKL .

Rear view of a Type S with factory body from 1927

The two and four-seater open vehicles were built on the long chassis with a 3400 mm wheelbase. They could be distinguished from the other Mercedes-Benz models - like their sister model K - by three exhaust hoses leading downwards on the right side of the engine compartment.

Two rising current ring float carburettors supply the engine with petrol. Each cylinder is equipped with two spark plugs ( double ignition ), which are operated both with the vehicle battery and with an ignition magnet . The vehicles have an unsynchronized four-speed gearbox with a center shift that transfers the engine power to the rear wheels. They reach a top speed of 170 km / h.

The vehicles have pressed steel frames made of U-profiles and rigid axles at the front and rear, which are suspended from semi-elliptical leaf springs. All four wheels have drum brakes that are operated with cables.

Two years later, the successor type SS (Supersport) came out with the same equipment. This vehicle was first run at Daimler-Benz AG under the model number W06. In addition to the chassis and the four-seater sports car, a Cabriolet A and a Cabriolet C were also available. There are different engines:

The successor to the aforementioned model differs only in the higher output of 160 hp (118 kW) without a compressor.

Parallel to the "weaker" models, there was also a version that delivered 170 hp (125 kW) without a compressor with the same displacement and the same nominal speed, which increased to 225 hp (165 kW) when the Roots fan was used . This higher performance was due to the higher compression ratio of 6.2: 1. The top speed increased to 190 km / h. 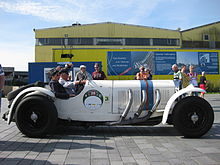 The most famous cars of this type were built on the short chassis with a 2950 mm wheelbase. "SSK" means "Supersport Short". The Italian racing driver Carlo Felice Trossi made a sketch of how he would imagine an aerodynamically sensible car. An English coachbuilder built a vehicle based on this drawing. The vehicles were delivered either as a chassis or as a sports two-seater. There were also different engines for this model series, some of which correspond to those of the SS type:

This motorization corresponds to that of the model with a long chassis. The maximum speed is 180 to 185 km / h, depending on the rear axle ratio.

A year earlier than the type SS, the engine with a slightly higher power in naturally aspirated operation was switched to.

The more highly compressed and more powerful engine in the short chassis was also available for two years. It ensured a top speed of 188 to 192 km / h, depending on the rear axle ratio.

In addition to the SS type engines, an even more powerful model with 180 hp (132 kW) in naturally aspirated mode and 250 hp (184 kW) with a supercharger was offered. The performance is at the level of the aforementioned version.

A racing two-seater was derived from the SSK type and was probably created by converting existing WS 06 wagons. The designation "27/240/300 PS" indicates the power in suction mode (240 PS / 176.5 kW) or in compressor mode (300 PS / 221 kW). These performances are achieved at a nominal speed of 3400 rpm and a compression of 7: 1. The performance in suction mode is only theoretical, as the Roots blower is constantly switched on in these cars .

From 1927 to 1933, the W 06 vehicles were used in many domestic and foreign competitions. One of the most famous drivers was Rudolf Caracciola . This is how they established the world fame of Daimler-Benz AG as a manufacturer of fast racing and sports vehicles.

A total of just under 300 vehicles of the W 06 model were produced. Several types S were later converted to type SS and several types SS to type SSK. As mentioned above, the type SSKL was probably created exclusively through later conversion of SSK types. Only the original versions are indicated here:

Only a few specimens of the type SSKL were made later; one was operated as a works racing car.