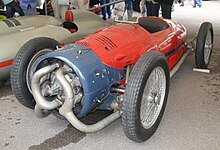 Count Carlo Felice Trossi was one of those well-off men’s drivers who saw racing not as a job but as a nerve-tickling pastime. However, he was more talented than most of his aristocratic colleagues.

In 1932, he was at a mountain race in a Mercedes-Benz - sports car first shown; for the next few years he bought an Alfa Romeo . Since the German teams Mercedes and Auto Union did not sell a car to privateers, he concentrated on hill climbs and races in the Voiturette class, where he celebrated numerous victories. In 1933 he was able to win the European Hill Climb Championship for racing cars. Often Trossi left all competitors behind, but he showed great fluctuations in performance. In addition to car racing, he also competed in motorboat races.

For the Italian Grand Prix in 1935 built Trossi with the engineer Augusto Monaco a single-seater with 16-cylinder - radial engine in front of the front axle and front-wheel drive , the Monaco-Trossi . The engine of the car was an air-cooled two-stroke with two compressors and a displacement of 3982 cm³. It made 250 hp at 6000 rpm. The curb weight of the car, whose body resembled an airplane fuselage, was 710 kg. The wheels were individually suspended from double wishbones with flat coil springs. Due to the heavy front load , the car understeered a lot, so that it took part in test drives, but not in the race.

When he was last successful, he was already suffering from cancer , from which he died in 1949 at the age of 41.