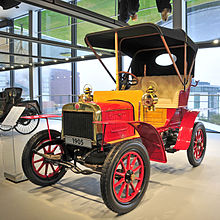 A voiturette ( French , about small car ) is a light and often sporty automobile . The name was first used in 1895 by Léon Bollée for his sporty, two-seater tricycles. This vehicle category enjoyed some popularity until the 1920s, as it also made it possible for groups of the population who otherwise had no access to the expensive automobile. Voiturettes were built lighter than small cars such as the Opel Laubfrosch , Renault NN or Austin 7 and were increasingly becoming a sporty alternative to these. The even lighter and smaller cycle cars appeared from around 1912 and were more appealing to previous motorcyclists. Unlike many cyclecars , voiturettes do not have a “tandem” seating arrangement with two people behind one another.

The types of construction were very diverse. A common denominator was the lightweight construction. Mostly (but not always) one or two cylinder engines were used. At the beginning of the 20th century, the single-cylinder Voiturettes from De Dion-Bouton , Renault or the sporty Sizaire-Naudin were very popular. The then largest car manufacturer in the world, De Dion-Bouton, supplied around 150 car manufacturers in Europe and the USA with its engines. Most of them were installed in voiturettes .

The Adlerwerke's first car was also a voiturette . It had a very advanced engine at the front, and the rear wheels were driven by a cardan shaft . The Voiturette A was the first automobile built in the Škoda factories. The Eisenach vehicle factory (later the Eisenach automobile factory) began producing cars under license with a French voiturette, the Wartburg motor vehicle .

With his second company foundation (1899), Johann Puch built the first four-wheeled two-seater motor vehicle after a tricycle according to De Dion-Bouton, the Puch Voiturette - the prototype from 1900 and the small series Model C still uncovered, the Voiturette from 1906 with a folding textile top for the first time.

After the First World War, the automobile quickly regained public interest. Sports cars from brands such as Amilcar , Hotchkiss , Salmson , Sénéchal , BNC and Rally , based on the Bugatti racing cars , came into fashion. Such vehicles did amazing things and took part in the toughest reliability drives like the Le Mans 24 Hours . The predecessor series of Formula 2 was the Voiturette series before the Second World War . For the first time, on the occasion of the Paris - Dieppe race on July 24, 1897 , a Grand Prix for Voiturettes was also contested (distance 171 km).