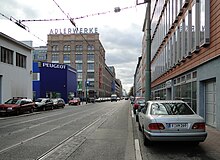 The Adlerwerke building is now an industrial monument (2009) 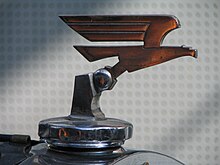 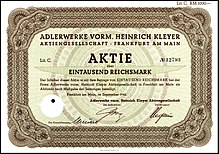 Share over 1000 RM of the Adlerwerke vorm. Heinrich Kleyer AG from September 1942

The Adlerwerke vorm. H. Kleyer AG were a German vehicle and mechanical engineering company based in Frankfurt am Main , which manufactured bicycles , cars , motorcycles and, most recently, office machines until 1998 . After the production and the sale of the historical company headquarters, the company was sold to an investor. It has been operating as Adler Real Estate since 1999 and has focused on the purchase and management of residential properties . The company continues to be listed on the Frankfurt Stock Exchange under its new name . 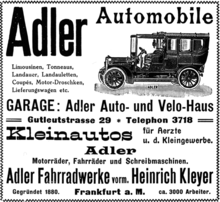 Memorial plaque for the prisoners of the former satellite camp

The north-east side of the Adlerwerke, seen from Weilburger Strasse over a construction site (2017)

Adler-Fahrradwerke, which initially produced their bicycles in Frankfurt am Main, Gutleutstrasse 9 (the house has not been preserved), was founded in 1880 by Heinrich Kleyer as Heinrich Kleyer GmbH . As early as 1881, the machine works Spohr & Krämer manufactured high and tricycles according to his specifications. In 1889 a factory with 600 workplaces was built in Frankfurt's Gallusviertel between Höchster Strasse (later Kleyerstrasse) and Weilburger Strasse on an area of ​​18,000 square meters. In addition to bicycles, tricycles and voiturette cars were produced there, which were equipped with De Dion engines. In 1895/1896, constant expansion of the company led to the transformation into the Adlerwerke vorm stock corporation . H. Kleyer AG, which had a share capital of 2.5 million marks , on which a dividend of 20 percent could be paid as early as 1898 . In 1898, the production of typewriters began in a seven-story high-rise factory on Weilburger Strasse.

From 1901, motorcycles with De Dion engines were added to the works' range. In 1902 the writer Otto Julius Bierbaum undertook a trip to Italy in an 8-hp eagle car, which he described in the book A Sensitive Journey in an Automobile . In 1903 the engineer Edmund Rumpler took over the Adler design office and developed the first own motors, which were put into production in 1904. In 1905, Adler was the first German automobile manufacturer to interlock the engine and transmission. Motorcycles were no longer produced from 1907 until after the Second World War . At the 1909 International Aviation Exhibition , the company presented prototypes of airship engines. Between 1910 and 1912, a monumental factory was built in three construction phases in historicizing forms, whose crenellated towers have been preserved and can be seen from afar.

In 1914, 20 percent of the passenger cars registered in Germany were from Adler.

Four years after the First World War , the company employed 10,000 workers and employees with branches in a further ten cities. By 1930 the number had dropped to 3,000, only to rise to 7,000 by World War II. In the 1920s, the Adlerwerke also had a branch in Berlin (Zimmerstrasse / Belle-Allianz-Strasse) and additional exhibition salons on Unter den Linden and Hardenbergstrasse.

In the first half of the 1930s the Adlerwerke to lay Opel and Auto Union mostly third of new car registrations in Germany, 1,936 displaced Mercedes-Benz they rank 4. The Adler Standard 6 with six-cylinder - inline engine was introduced 1926th The model, based on the Chrysler 60 , was the first German passenger car to have a hydraulic brake system built by ATE with a Lockheed license. Together with the body made entirely of sheet steel, the Standard 6 was able to catch up on the development lead of the US vehicles that were in great demand in Europe at the time . By 1934, Adler sold almost 30,000 of the successful model. On the same technical basis, the Standard 8 with an eight-cylinder in-line engine was added in 1928 and the smaller four-cylinder Favorit in 1929 . In 1930, the former head of the Bauhaus, Walter Gropius, became a management consultant and redesigned the bodywork as well as the branding . A collaboration that was groundbreaking and made the “cube limousine” the new paradigm, but which proved to be just as difficult as the liaison between the French architect Le Corbusier and the French automobile manufacturer Voisin, not least because of the global economic crisis .

After the bankruptcy of his own company, Röhr Auto AG , Hans Gustav Röhr was chief designer at Adlerwerke from 1931 to the end of 1935. He developed the Adler Trumpf presented in 1932 , a mid-range vehicle that was characterized by independent suspension of all wheels and front-wheel drive , which was still unusual at the time . With an engine of one liter displacement , the Adler Trumpf Junior , also front-wheel drive, small car followed in 1934 , of which over 100,000 copies were sold by 1939. In total, the Adler factories produced around 210,000 automobiles. In 1935, Adler parted with the aircraft manufacturer Max Gerner .

During the war in Frankfurt, the Adlerwerke operated labor camps for forced laborers on Froschhäuser Strasse as well as Kleyerstrasse 45 and Krifteler Strasse 47 (Plant IV). During the air raid on Frankfurt on March 22, 1944, the Adler factories were badly hit and large parts of the production were outsourced as a result. The production of engines and chassis for half-track vehicles of the Wehrmacht ( Sd.Kfz. 10 and 11 ) remained on site. There was a shortage of workers, even additional forced laborers were no longer available. Therefore, the management asked the SS Economic and Administrative Main Office to assign concentration camp prisoners . This was also implemented and the prisoners were housed on the premises in Plant I on Weilburger Strasse. Between August 1944 and March 24, 1945 around 1,600 people were employed in the subcamp of the Natzweiler-Struthof concentration camp that was now created under the code name Katzbach . About a third of the concentration camp prisoners died in Frankfurt, more than 700 were moved to other camps because they were too weak to work, so that ultimately only a small number of those imprisoned in the Adlerwerke survived. On March 24, 1945, about 350 prisoners were driven via Hanau , Schlüchtern , Fulda and Hünfeld on a death march to the Buchenwald concentration camp (→  final phase crime ).

After the Second World War, the US occupation forces confiscated the existing facilities from the Frankfurt automobile production, which were not allowed to be used. By 1948, workers and employees hoped to start producing cars again. The smallest model, the Trumpf Junior , had been modernized for this purpose . The bodies should be supplied by Karmann . This hope was dashed when General Director Ernst Hagemeier prevented the resumption of automobile manufacture after his return from internment in 1948. After the loss of the automobile factory, the production program was fundamentally changed. In addition to bicycles and office machines, motorcycles and machine tools were also to be manufactured. Adler came onto the market in 1949 with its own motorcycles. In the 1950s, Adler built very popular and sporty motorcycles. The top model was the MB 250 S (sports version) with a two-stroke two-cylinder engine that developed 18 hp in road use. In 1955, with the Adler Junior , a 100 cm³ scooter was added to the range to make up for declining motorcycle sales.

In 1957, Max Grundig bought the share capital of the Triumph works in Nuremberg as well as a stake in the Adler works, which meant the end of motorcycle production for Adler. In 1958 Grundig AG merged both subsidiaries as well as the dictation machine division (Grundig-Stenorette) of its Grundig tape recorder to form Triumph-Adler Büromaschinen-Vertriebsgesellschaft and from then on only produced office machines. The later Triumph-Adler owners Litton Industries , Volkswagen and Olivetti also limited themselves to office machines. 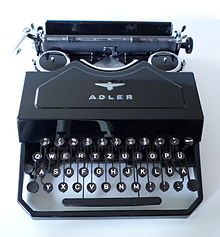 Bumper case typewriter from the 1930s

In 1993 Olivetti sold the still listed Adlerwerke AG with the entire historic factory premises in Frankfurt to the real estate investor Roland Ernst and the construction company Philipp Holzmann . The still existing typewriter production was initially relocated and finally stopped completely in 1998; the site with the listed buildings was sold separately to the investors' daughters. In 1999 HBAG Real Estate (formerly Kühltransit AG) took over 98.3 percent of the shares in Adlerwerke AG from the financially troubled Philipp Holzmann AG.

Adlerwerke AG changed its name to Adler Real Estate in 2002 and has been involved in real estate project development ever since. The company has been majority-owned by a US fund since 2005.

Building complex in Frankfurt am Main

The western and eastern parts of the original Adlerwerke building complex in Frankfurt am Main have been preserved. The striking east brick building from 1907 shapes the overall picture. In between, new buildings were built in the 1990s that fit into the complex. Tenants (as of 2013) include the Gallus Theater , an event agency and the like. a. with classic car meetings, a restaurant (temporarily), the advertising agencies Wunderman and Young & Rubicam and several subsidiaries of Deutsche Bahn , including DB Systel , DB Station & Service , DB Vehicle Maintenance , DB Gastronomy, as well as a representative office for the DB Infrastructure division .

The documentary film Fräulein Stinnes drives around the world tells the adventurous journey of Clärenore Stinnes , who in 1927 was the first person to circumnavigate the earth in a car, an Adler Standard 6 .

Concentration camp prisoner grave in the main cemetery in Frankfurt