The Maybach engine GmbH (until 1918: Aircraft engine construction GmbH ), a German engine and was car manufacturers.

The Maybach brand was reactivated by DaimlerChrysler AG in 2002. From 2002 to 2012, the Maybach factory again produced luxury cars. This tradition has been continued under the Mercedes-Maybach brand since the end of 2014 .

First of all, Luftfahrzeug-Motorenbau GmbH developed and built the diesel and gas engines for the airships of the Zeppelin works, including the supercompressing engine (MB IVa), which could only be operated unthrottled at an altitude of 1,800 meters without being damaged.

Maybach built the CX engine in series by 1915. 28 airships and six remote control boats were equipped with it. The engine was a six-cylinder with 22.8 liters and 154  kW (210  hp ) at 1300  min -1 . The machine had an automatic ignition timing adjustment with fuel nozzle regulation. It had a device for ignition interruption in the event of overspeed or interruption of lubrication. The engine was also equipped with an additional independent manual ignition advance.

The CX engine was first used for the naval airship L 2 (= LZ 18), with the L 17 (= LZ 52) the "HS" series with 240 hp was introduced (correctly "HSLu" like HS airship). However, the first engines in this series had a number of "teething troubles" that could only be resolved satisfactorily after many airship test drives. As a rule, the prematurely introduced engines were exchanged for new HSLu. Three months later, the results were good to very good, and the engines usually survived the long airship missions (20–40 hours) without any problems.

With the naval airship L 52 (= LZ 98), the airship force took over the first real high-altitude air engine, the MB IVa. This engine solved the problem of the "diluted" air, i.e. the low air pressure at higher altitudes, with three different carburetor settings: "La" (starting), "V" (full throttle, travel up to 1800 m altitude) and "H" ( Altitude gas, from 1800 m). A test stand on the Wendelstein (1,800 m) had done a very good job of developing the engine, which only developed its full power from an altitude of around 1,800 meters. The type MB (260 hp) received its approval in March 1917. Up to 200 engines were built per month, well over 2000 in total. Towards the end of the First World War , these engines were even installed in speedboats of the Navy. Other companies such as BMW built the high-altitude engine under license (BMW IVa). The engines were consequently used primarily in fighters and high-altitude reconnaissance aircraft.

Note on naming: the first type designations simply resulted from the first or last letter, counting inwards - AZ - BY - CX - DW - HS. It was only with the MB that this “rule” was abandoned. “MB IVa” therefore only means “Maybach (type series) IVa”.

December 1924: Maybach automobiles at the German Motor Show in the Kaiserdamm exhibition hall in Berlin-Westend 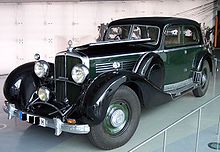 In 1918 the company was renamed Maybach-Motorenbau GmbH . On the basis of the Versailles Peace Treaty , which banned the production of airships and airplanes, the Maybach works now began to manufacture automobiles. The first aerodynamic tests were also undertaken.

Powerful gasoline engines for use in the automotive sector followed. In 1919 the first test car "W 1" was completed; the first "W 3" car offered for sale was presented in 1921 at the Berlin Motor Show. In 1930 the Zeppelin came onto the market. The largest German sedan powered a twelve-cylinder engine . As was common in the vehicle class at that time, the Maybach luxury cars were only delivered from the factory as a chassis without a body . Although they worked closely with the body builder Hermann Spohn in Ravensburg , there were still numerous Maybach cars with bodies tailored to the customer's wishes. From 1941 the Friedrichshafen plant stopped producing automobiles. In the company's history, only 2300 Maybach vehicles have been produced in around twenty years of automotive engineering.

The engines were also used as drives for ships and airships.

For the winch launch of gliders , the so-called Maybach winches (cable winches) were equipped with 100 HP Maybach HL 42 motors in the 1930s . Many of them performed well even after the resumption of gliding in Germany from 1950, especially on the glider airfields of the Society for Sport and Technology in the GDR , where some of them were in operation until the end of the 1970s. 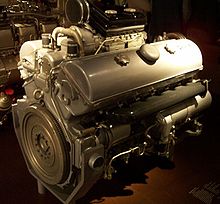 Before and during the Second World War , Maybach and his licensees built gasoline engines for almost all tanks and towing vehicles ( "special vehicles" ) of the Wehrmacht, as well as engines for assault boats . The 300 hp twelve-cylinder Maybach HL 120 engines of the German Panzer III and Panzer IV were widely used . The more powerful HL 230 with 700 hp was used in the Panther , Tiger I , II and the Jagdtiger .

After the war, the factory in Friedrichshafen was quickly rebuilt, but initially mainly served as a repair shop. A new start in motor vehicle production was thought over and over again, but this failed not least due to a lack of capital. In contrast, engine construction for rail vehicles ( diesel locomotives ) and ships was expanded further. However, fast-running marine diesel engines remained limited to certain purposes.

In 1960 Daimler-Benz took over Maybach-Motorenbau GmbH and renamed the company MTU Friedrichshafen GmbH .

The DaimlerChrysler AG in 2002 reactivated the Maybach brand for luxury car. Technically, these Maybach models were based on the earlier S-Class of the 140 series , built from 1991 to 1998 . The Maybach models 57 and 62 were built by the Daimler Group in the Maybach factory at the Sindelfingen plant until the end of 2012 . As with the production of the earlier state bodies of the Mercedes-Benz 600 , the manufacturing company is said to never have come anywhere near economically positive results and was thus purely a prestige company. The Board of Management of Daimler AG decided to end the Maybach brand in 2012. Maybach limousines were sold until 2013, when the luxury brand has been discontinued.

At the end of 2014, however, the renewed use of the name Maybach by the Daimler Group was announced. Among other things, exclusive derivatives of the Mercedes-Benz S-Class with the Maybach suffix are now on offer . Since then, Maybach has continued to operate as the Mercedes-Maybach premium brand .

The first Maybach from 1919 was a prototype, the "Wagen" W 1, built on a purchased Daimler chassis. He was already wearing the characteristic radiator grille. W 2 was an engine. In 1921, the W 3 was the first production car with a six-cylinder in-line engine and a locked planetary gearbox, available as a 22/70 hp type. The first number denotes the earlier "tax horsepower", a figure calculated by the tax authorities since 1909 from power and displacement; the second the engine power.

The Zeppelin DS models, first offered by Karl Maybach in 1930 and delivered from 1931, were available as types DS 7 and DS 8 . They were the first Maybach models with a V-12 engine. DS 7 means double six-seven liters. DS 8 means double six-eight liters. The DS 7 made 150, the DS 8 200 hp. It was equipped with a 7922 cubic centimeter engine. The superstructures were supplied by Spohn and Erdmann & Rossi . Compared to the 1931 Bugatti Royale Type 41 with a price of 100,300  Reichsmarks , the body of the Zeppelin DS 8 was downright cheap: 33,200 Reichsmarks.

On March 31, 2009, the museum for historic Maybach vehicles was opened in Neumarkt in der Oberpfalz . It is the world's only brand museum for Maybach vehicles and, unlike brand museums from other manufacturers, is in private hands. 16 vehicles and other exhibits that the museum's founder Helmut Hofmann collected over the course of twenty years are exhibited on 2500 m² in the building of the former Express Works .