Westend is a Berlin district in the Charlottenburg-Wilmersdorf district , which is located west of the Charlottenburg district. Originally planned as a pure villa colony and named after the elegant London district , some parts of Westend today have an urban feel with the typical Berlin apartment buildings.

The eastern areas of the Westend district - excerpt from the supplement to the address book for Berlin and its suburbs , 1907

Westend is mostly located on the Teltow plateau , which breaks off steeply to the north towards the Spree . To the north, Westend is bounded by the border with the Spandau district and the Spree, to the east by the Ringbahn , to the south by the AVUS and the Grunewald and to the west by the Stößensee and the Spandauer Vorortbahn .

For a long time the sandy, wooded plateau was only built on with a few windmills . After the victory in the battle of Jena and Auerstedt in 1806, Napoleon set up a camp for his occupation troops on the undeveloped eastern slope of Westend, roughly along today's Königin-Elisabeth-Straße. He himself resided in Charlottenburg Palace . The camp with the name Napoleonsburg (or: Napoleonbourg ) was set up on an order of Napoleon in May 1808 by the French governor of Berlin, Victor Duke of Belluno , in June and July and already demolished on November 2, 1808. The front of the roughly right-angled camp ran roughly from Wundtstrasse on Lietzensee in the south to the site of today's DRK clinics Westend near Fürstenbrunn, with the camp about one kilometer wide. It consisted of 380 residential barracks for 20 men each as well as 64 larger barracks for kitchen and dining rooms and two rows of better equipped barracks as accommodation for NCOs. 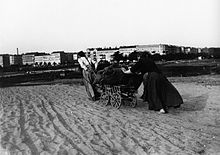 Brushwood collectors on Westend, in the background the houses on Sophie-Charlotten-Strasse

After the withdrawal of the French troops , Westend fell back into its deep slumber. The forest, which had largely disappeared due to the camp and the deforestation in the area, never seems to have recovered. The painter Heinrich Zille lived around 1900 in Sophie-Charlotten-Strasse across from Westend and documented in numerous photographs the sandy wasteland on the slope to Westend, where Napoleon's camp was almost a hundred years earlier.

In 1840, a Bavarian beer brewer who brewed Bockbier in Spandau acquired the site , which is now in the corner between Spandauer Damm and Reichsstraße, and opened a small bar there, popularly known as the “ Spandauer Bock ” in Berlin . In 1854 he moved his brewery from Spandau to the Spandauer Berg site on the opposite side of the Spandauer Damm, which from then on was called the Spandauer Berg Brewery . The restaurant that was being built there was called " Zibbe " ( northern German for 'mother sheep'). Over time, a lively excursion traffic from Charlottenburg and Berlin developed into the "Spandauer Bock". The two excursion restaurants and the brewery were destroyed in the Second World War and not rebuilt.

The development of Westend in its current form began in the late 1860s. The come to Fortune magazine publisher Ludwig von Schaeffer-Voit was east of the brewery on a slope to the river Spree , the Ruhwald castle built and a large landscaped garden, the present Ruhwaldpark create, around the castle.

Around the same time, Albert Werckmeister (together with Johannes Quistorp , the builder Martin Gropius , the banker Eichhorn and the lottery taker Tuchen) founded in 1866 the limited partnership on shares "Westend" began to buy up large areas in Westend, to parcel them out and to sell them on. Shortly after it was founded, the company ran into difficulties. After its dissolution in 1868, the business was transferred to the Westend-Gesellschaft H. Quistorp & Co. zu Berlin , in which Heinrich Quistorp - brother of Johannes Quistorp, who also built the Westend in Szczecin - and Ferdinand Scheibler were personally liable partners. The waterworks at Teufelssee were built in 1871/1872 to provide water to Westend . Due to the stock market crisis in 1872 and disputes with the city of Charlottenburg, the Westend-Gesellschaft got into financial difficulties and went bankrupt in 1873 .

With the completion of the Ringbahn , Westend station was opened in 1877 . This significantly improved the traffic situation not only for Westend, but also for Charlottenburg. The Charlottenburg train station on the Stadtbahn was only opened in 1882.

After the collapse of the Westend Society, building activity in Westend came to a standstill and some villas were vacant. From the end of the 1870s, the situation eased. Due to the population explosion in the Berlin area, Westend experienced an upswing, so that by the turn of the century the originally parceled area was essentially built on. The barracks of the Queen Elisabeth Guard Grenadier Regiment No. 3 were built on the slope of the Teltow in the 1890s between Soor and Queen Elisabeth Strasse , in 1906 the Epiphany Church to the east based on designs by Jürgen Kröger and the hospital to the north in 1904 Westend (today: DRK clinics Westend ).

In 1908, with the opening of the Reichskanzlerplatz underground station (today: Theodor-Heuss-Platz ) designed by Alfred Grenander , Westend was connected to the Berlin underground . This meant that the southern and western areas of Westend were now also conveniently located, so that Neu-Westend was built on Reichsstraße and to the west of it. The right-angled street layout in the old Westend was replaced by curved lines outside the main axes in keeping with the spirit of the times. Instead of villas like the old Westend, Neu-Westend was mostly built with rental and terraced houses. The trotting track , which opened on Neu-Westender Grund in 1889, was relocated to Ruhleben in 1908 . On the site of a gravel pit from 1919 to 1922 the Charlottenburg city garden director was Erwin Barth of Sachsenplatz (now Brixplatz) built a small deep incised park, geology and vegetation of the Mark Brandenburg replicates.

For the opening of the German Stadium in 1913, the underground line for events was extended to the Stadion underground station (today: Olympia-Stadion). The shell of the Neu-Westend station , which was completed in 1913, was not put into operation until 1922 due to the war , which meant that the underground line was now regularly used. The Spandau suburban railway was built from 1907 to 1911, and today it includes the S-Bahn stations Messe Süd (Eichkamp) , Heerstraße , Olympiastadion and Pichelsberg .

In the 1920s, the extensive facilities of the German Sports Forum were built on the northwestern edge of Westend . The Berlin exhibition grounds were also built at this time in the southeast of the district . At the end of the 1920s, architects of the Bauhaus and New Objectivity, such as Mendelsohn and the brothers Hans and Wassili Luckhardt, built their own, now listed, villas on the Rupenhorn , the high bank above Lake Stößensee. On the occasion of the 1936 Summer Olympics , the Berlin Olympic site and the Germany Hall were built . 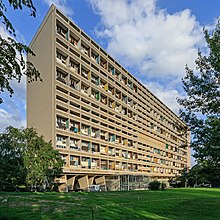 The Westend transport system is well developed, as the modes of transport are generally important due to the urban location, the large squares and the many sights ( Olympic Stadium , trade fair , etc.). Important main roads and the Berlin city motorway run through the district and connect it with the nearby districts of Berlin.

Subway Line 2 , which was partly opened in 1908 and fully opened in 1913, runs through Westend . Later, in 1928, today's U2 line was extended by a station to Ruhleben . The section that runs through Westend is the last western section of the U2. It connects Westend with Charlottenburg , Schöneberg , Mitte , Prenzlauer Berg and Pankow . There is also an operating workshop for the Berlin subway in the district .

In terms of rail technology, Westend is also well connected to the Berlin urban area and the surrounding area by S-Bahn . The Ringbahn (S-Bahn lines S41, S42 and S46) touches the district to the east with the stations Messe Nord / ICC and Westend . The S46 line ends in Westend and continues on the southern ring, then via Schöneweide to Königs Wusterhausen . The S5 line is also of great importance. She comes from Spandau and stops in Westend at the train stations Pichelsberg , Olympiastadion , Heerstraße and Messe Süd . Then it continues through Charlottenburg on the city ​​railway line through Tiergarten and Mitte, then through the eastern districts of Berlin to Strausberg in the Berlin area.

The park at Brixplatz was designed from a former gravel pit according to plans by Erwin Barth from 1919 to 1922, whereby the natural vegetation and geological formations of the Mark Brandenburg are reproduced. A citizens' initiative has taken over the maintenance of the botanical teaching garden and has thus so far secured the preservation of this garden monument .

On the western edge of the district are two nature reserves , each with specific biotopes . The flow meadow Ruhleben , which is also designated as a protected area of ​​the European Fauna-Flora-Habitat Directive and as part of the transnational protected area system Natura 2000 , represents a silting bog. The former lake is characterized by a population of rare aquatic plants , a black alder biotope and a wealth of amphibians , among them especially the strictly protected crested newt . It belongs to the compression / terminal moraine landscape Murellenberge, Murellenschlucht and Schanzenwald , which form part of the Teltownordband. In particular, the dry grass areas of the Murellenschlucht have a diverse and endangered flora and fauna . The memorial path ( memorial to commemorate those murdered by the Nazi military justice on Murellenberg ) through the gorge and on the hills reminds with the installation of 104 traffic mirrors of the executions of deserters and so-called " military force disruptors " in the last months of the Second World War at this point .

Westend has several high schools. The Herder-Oberschule in Westendallee, the Heinz-Berggruen-Gymnasium (formerly: Erich-Hoepner-Gymnasium and previously Charlottenburger Gymnasium ) in Bayernallee and the Wald-Oberschule in Waldschulallee form the so-called "triangle". The three grammar schools have different focuses: The Herder-Oberschule has a mathematical and scientific orientation and is a member of the MINT-EC . The Heinz-Berggruen-Gymnasium focuses on music and art, while the Wald-Oberschule focuses on sports and languages. The Catholic School Liebfrauen , founded in 1926, is based here.

The Touro College Berlin , part of the Jewish-American Touro university network , has been located at Rupenhorn 5 since 2003 .

The Schele School is a state-approved, privately owned primary school .