Bernd Rosemeyer after his victory at the Vanderbilt Cup in 1937

Bernd Rosemeyer (born October 14, 1909 in Lingen (Ems) ; † January 28, 1938 on the Reichsautobahn Frankfurt – Darmstadt near Mörfelden-Walldorf ) was a German motorcycle and automobile racing driver . He became European Grand Prix Champion in 1936 and was one of the most famous and successful German racing drivers during the Nazi era . 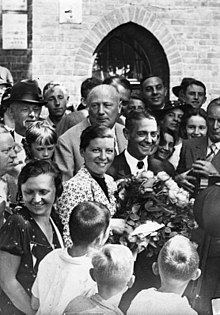 Elly Beinhorn and Bernd Rosemeyer at their wedding (1936)

Bernd Rosemeyer grew up in Lingen in a small family of Catholic manufacturers that was very open-minded and open to the world . His uncle Josef Rosemeyer took part in the Olympic Games in Athens as a cyclist in 1896 , while Bishop Wilhelm Berning from Osnabrück was a cousin of his father. Rosemeyer received training in his father's workshop and quickly made a name for himself with his cabinet pieces on motorcycles .

Bernd Rosemeyer was married to Elly Beinhorn , a famous and successful aviator at the time, on July 13, 1936 , and had a son with her - Bernd Rosemeyer jr. who later became a sports doctor and advised the ADAC on traffic medicine. Bernd Rosemeyer was close friends with the Italian Grand Prix racing driver Tazio Nuvolari .

From 1930 Rosemeyer drove motorcycle races for NSU and DKW . In 1934 he took part in a major automobile sport event for the first time, the 2000 km through Germany with start and finish in Baden-Baden .

In 1935 he finally switched to automobiles and became a works driver at Auto Union AG, Chemnitz . Their racing car department was located at the Horch plant in Zwickau . Although the 16-cylinder - mid-engine - racing cars was considered difficult to control, so he celebrated on 29 September 1935 on the Masaryk Circuit in Brno his first victory. In 1936, after a series of victories, he became European champion: In addition to three Grands Prix in Germany, Switzerland and Italy, he won the Eifel race, the Coppa Acerbo in Pescara and two mountain races (Schauinsland, Feldberg).

Rosemeyer's career as a racing driver was strongly shaped by the National Socialists' efforts to make up the technical deficit after the First World War with an enormous investment of monetary resources . Hitler personally campaigned for the running of the ailing auto industry to be boosted with 500,000 and 300,000 Reichsmarks.

As a result, the drivers of the cars from Auto Union and Mercedes-Benz, which were technically superior due to the national funding program, dominated the racing program.

On October 25, 1937, Rosemeyer first reached a speed of 400 km / h on a public road . After a flying start , Rosemeyer drove an Auto-Union streamlined car of the type C through the one-kilometer-long and specially prepared measuring section on the newly built and purpose-built Reichsautobahn Frankfurt - Darmstadt at a speed of exactly 406.32 km / h. 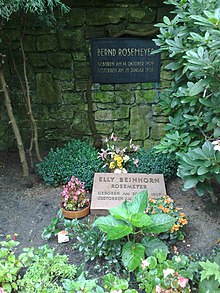 On January 28, 1938, Rudolf Caracciola reached the record mark of 432.692 km / h average speed on the Frankfurt – Darmstadt autobahn (a section of today's A5 ) and back (outward journey towards Darmstadt 428.571 km / h, return towards Frankfurt 436.893 km / h). This is the highest speed ever driven on a public road. Arrived at the end point, where Rosemeyer was ready to start, he warned him of the gusts of wind on the road. Shortly afterwards, Rosemeyer also got into his car, an Auto Union Type R (record car), in order to regain the record. Behind the Langen-Mörfelden motorway slip road in the direction of Darmstadt (Rosemeyer had just driven the kilometer measurement section at a speed of 429.491 km / h), the vehicle came to a forest clearing, probably due to a gust of wind, to the left on the central greening of the motorway. The car turned sideways and rolled over several times, with Rosemeyer being thrown out of the car into the forest. He was dead on the spot.

His grave of honor is located in the Dahlem forest cemetery in Dept. 11 Fam.St.-4a.

In 1933 Rosemeyer was the only one of the top German racing drivers to join the SS without being forced to. During the time of National Socialism, the rulers stylized him as a folk hero, one of the first “pop stars of the Nazi era”. Adolf Hitler gave the speech at his funeral and said of his death: “It is painful for all of us to know that one of the very best and most courageous of these pioneers of the international reputation of German engine and automobile manufacture, Bernd Rosemeyer, had to give up his young life . "

Before he married Elly Beinhorn, Rosemeyer had to submit a marriage application, in whose questionnaire he stated that he would join the SS in 1932.

Victor Klemperer wrote in the introduction to LTI - Notebook of a Philologist (Lingua Tertii Imperii) about Rosemeyer in 1946 : “The most memorable and most common image of heroism was provided by the racing driver in the mid-thirties: after his death, Bernd Rosemeyer was almost on a par with him for a while Horst Wessel before the eyes of the people's fantasy. ”Although he appeared publicly in SA uniforms, Rosemeyer was not an SA member like Wessel, but an SS Hauptsturmführer . He achieved this rank, which corresponds to that of a captain in the Wehrmacht , through promotions after racing victories. There is no evidence that Rosemeyer did any active service within the SS. Nevertheless, his successes in national and international races were used by the National Socialists for propaganda purposes. After research by the local historian Horst Heinrich Bechtluft, he probably joined the SS in order to be able to realize his career aspiration as a full-time racing driver in this organization, which is considered to be elitist; membership in the National Socialist Motor Corps (NSKK) would have sufficed for this. Elly Beinhorn contradicted this representation in a 1993 ZDF interview: Rosemeyer suddenly became a member of the Motor SS after the local Lingen motorsport club was brought into line.

Rosemeyer appeared repeatedly in public, for example at award ceremonies and receptions, with swastika insignia. In a picture from August 1933 he is the only member of the driver corps to wear a swastika armband.

The circumstances of his death were exploited by Nazi propaganda through a pompous, heroic staging.

After his death Elly Rosemeyer-Beinhorn wrote the previously planned biography Mein Mann, der Rennfahrer. The life path of Bernd Rosemeyer , which was published in 1938 with 77 illustrations. “Everything essential in your life was heroic and large-scale,” she wrote in the foreword. Letters of condolence from Hitler and other Nazi figures are printed in the book, which has sold over 200,000 times.

Memorial on the A5

Motorway parking spaces on the A 5

There are two motorway parking spaces near the memorial and on the opposite lane on the A5 , both of which were called Rosemeyer rest area . In 2014 and 2015, the motorway parking lots were renamed to Rastplatz Bornbruch-Ost and Rastplatz Bornbruch-West . Although the renaming by Hessen Mobil was justified by a guideline of the Federal Ministry of Transport and Digital Infrastructure for the uniform naming of "unmanaged rest areas with landscape-related names", there were public speculations that Rosemeyer's SS membership was the actual reason for the renaming.

The Bahnhofstrasse in Lingen , where the racing driver grew up, was renamed "Bernd-Rosemeyer-Strasse" by the NSDAP district leader and mayor Erich Plesse after his death in 1938 .

In Dortmund there is the Rosemeyerstraße near the A40 and in other places such as in the Ricklingen district of Hanover there is a street with the same name.

In 2000, Audi dedicated a design study to the racing driver that bears his name. The look of the Audi Rosemeyer - also known as the Audi Project Rosemeyer - is reminiscent of the success of Auto Union with works driver Bernd Rosemeyer.

The entrepreneur Heinrich Liesen has been striving to set up a museum in Rosemeyer's hometown since 2017 . In advance, there was a critical discussion of Rosemeyer's role in the Third Reich and how this topic could be treated appropriately in the museum. After massive criticism, the concept of a Bernd Rosemeyer and Elly Beinhorn Museum , which deviated from the original plan of a museum only for Bernd Rosemeyer, was finally presented to the public in November 2018 .

According to curator and historian Bernd Walter, the around 200 square meters of exhibition space in the museum are divided into three thematic areas: The first area is to deal with Rosemeyer's youth and training, his first successes as a motorcycle racer and his relationship to National Socialism with the associated historical context. The second area deals with Rosemeyer as a successful racing car and record driver of Auto Union, his associated rise to the sport idol and his marriage to Elly Beinhorn. The third area deals with his accidental death and the myth of Rosemeyer.

The opening of the museum has been postponed several times. It is expected to open at the end of 2020.