The Auto Union racing cars ( Grand Prix cars type A to D) were used between 1934 and 1939 at major national and international racing events. The  vehicles developed in Zwickau at the Horch plant of Chemnitz Auto Union AG were based on a racing car project by Ferdinand Porsche's Stuttgart design office .

At the end of 1932, Dr. Ing.hc F. Porsche GmbH, design and consulting for engines and vehicles, the preparations for a Grand Prix racing car based on the 750 kg formula decided by the AIACR for 1934 in October . This formula stated that the weight of the car without the driver, fuel, oil, water and tires could not exceed 750 kg. Ferdinand Porsche may have initially worked without an order from a manufacturer. If necessary, he wanted to produce and use the vehicle himself. Deviating from this, there are reports that the Wanderer-Werke contracted Porsche in autumn 1931 to develop a Wanderer racing car. After the Wanderer automotive division was taken over by Auto Union , which was founded in the summer of 1932, the latter took over the contract. In view of the global economic crisis , however, the implementation of the plan was not initially considered.

From the P-car to the Auto Union Type C. 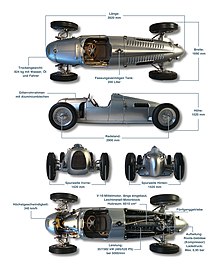 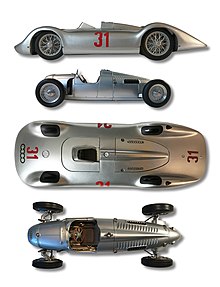 The Auto-Union Type C “Streamline” compared to the base vehicle

In order to keep the limited resources the financial risk to his own design office low, founded Porsche on 8 November 1932 together with his CEO Adolf Rosenberger , the high-performance automotive GmbH  (HFB). The sole purpose of the company was the exploitation of the racing car project ( P-Wagen , P stood for Porsche), from design and construction to readiness for use and participation in racing. A few days after release of the new race formula fixed Porsche with the employees of its Stuttgart design office the corner points for the development of the car: Sixteen barrel - V-type engine with 4.4 liter  displacement and charging by a Roots blower ( compressor ). The work preparation protocol of March 11, 1933 in Zwickau shows that Karl Rabe submitted all the individual drawings for the car. Josef Kales was to design the V-16 engine, while Rabe was responsible for the chassis. In 1933 Auto Union took over the P-car concept for 75,000  Reichsmarks . The first tests were carried out in the winter of 1933/34 on the Nürburgring , the AVUS in Berlin and the Autodromo Nazionale Monza .

The basic concept of the car was retained during further development: at the beginning (1934) the V16 developed 295 hp with a displacement of 4.4 l (type A), already in 1935 the 5 l displacement turned into 373 hp (type B) and in 1936 a 6 l displacement 520 hp (Type C) achieved. Over the five-speed gearbox in the rear of the car and between the engine and the rear axle lying differential which have rear wheels are driven . Behind the driver was the inverted “U” -shaped 280-liter tank, followed by the engine, differential and rear axle. During the races, the driving behavior changed only marginally due to the emptying of the tank, as the center of gravity was in the middle of the car.

In 1934 the engine had a crankshaft forged from one piece, mounted in lead bronze plain bearings , which was replaced in 1936 by a multi - part roller bearing with Hirth serration . A between the cylinder banks arranged camshaft controlled inlet valves via rocker arms directly and the exhaust valves located on the outer sides of the cylinders on rocker arms, bumpers and rocker arm . The camshaft, compressor and the two ignition magnets were driven by a vertical vertical shaft . The type C achieved a maximum torque of over 850  Nm at 2500 rpm .

The front wheel guidance on a torsion bar sprung crank arm axle with friction shock absorbers was a Porsche invention that was characterized by its low weight and great robustness. The rear wheels were suspended on a pendulum axle with trailing arms, which was cushioned by a transverse leaf spring in the 1934/35 racing season and by torsion bars in 1936/37. The same suspension principle was later adopted into mass production in the VW Beetle . The four drums of the dual-circuit brake system were made of light metal, diameter 400 mm, width of the two brake shoes 50 mm.

The frame consisted of two longitudinal tubes with a diameter of 75 mm, which were connected by a front oval tube and two welded cross tubes as well as another cross connection screwed to the longitudinal tubes, on which the engine and transmission lay. Initially, the longitudinal pipes also conducted the cooling water from the radiator installed in the front to the engine. From 1936, however, because of leaks in the weld seams, fabric hoses were used instead for the cooling water circulation.

The Auto Union Type C was the most successful German Grand Prix racing car in 1936. He won three of the five grand prizes , half of the circuit races and all hill climbs with Auto Union participation. In addition, the Type C set over thirty world records. 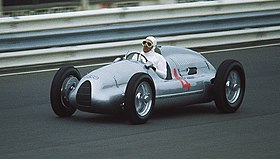 Type D 1979 on the home straight of the Nürburgring, driven by Colin Crabbe, who restored the car

After the end of the 750 kg formula, Robert Eberan von Eberhorst became chief developer of the Auto Union racing department in Zwickau. Under his leadership, the Auto Union D-Type was developed in 1938/39 with a twelve-cylinder engine for the new displacement formula (maximum 3 l with or 4.5 l without supercharging).

The new 3-liter twelve-cylinder was basically constructed like the 16-cylinder. The cylinder bank angle, which was increased from 45 to 60 degrees, now required three camshafts for valve control: the middle one controlled the intake valves of both cylinder banks, the two outer shafts the exhaust valves. The middle camshaft, driven by a vertical shaft, in turn drove the outer camshafts via transverse side shafts . The engine was initially charged by a Roots single-stage compressor, in the further development of a Roots two-stage compressor (1.67 atm).

A major change to the suspension was on trailing links and panhard rod guided rear De Dion tube with double cardan shafts, longitudinally arranged torsion springs, and combined hydraulic and friction shock absorbers, instead of swing axle of the types A to C. The new design gave the track on compression and rebound constant . The front crank arm axle with torsion bar suspension remained largely unchanged. However, hydraulic lever shock absorbers were new instead of the earlier friction dampers. In addition, the crank arms have been lengthened from 95 to 140 mm in order to achieve greater spring travel.

The hill climb cars based on this type (with twin tires on the rear axle and a modified final drive) still had the 16-cylinder type C unit.

In view of the power-to-weight ratio that could hardly be improved through engine development, the Auto Union technicians decided, together with the Porsche aerodynamicists, to optimize the racing car body. It was tested for the first time at the AVUS in Berlin at the end of April 1937 and was used there in its only race on May 31, 1937. Up to then not achieved speeds were achieved. Bernd Rosemeyer achieved a training record that could not be exceeded. On the straight it reached a top speed of 380 km / h. In June and October 1937, Auto Union set several world and class records with the Streamlined Silver Arrow Type C in record drives on the Reichsautobahn Frankfurt-Heidelberg, with Rosemeyer being the first person to break the 400 km / h threshold on a normal road. In class C (displacement from 3000 to 5000 cm³) he became the record holder with 351.9 km / h.

Including the 3-liter formula, the racing commitment brought the following earnings: A total of 61 races resulted in 24 wins, 23 second and 17 third places. Of 23 hill climbs, 18 were won, Auto Union won the hill climb championship four times, and the German championship was won in 1934, 1936 and 1938. The basis for this success of Auto Union between 1934 and 1939 were both high-performance engine construction and the consistent implementation of aerodynamics and lightweight construction in automobile racing.

Front suspension on crank trailing arms (same principle as in the KdF car developed around the same time , the later VW Beetle ) 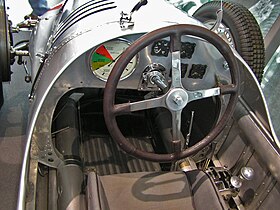 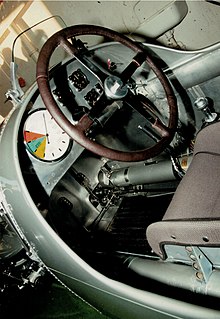 Location of the vehicles after the war

After the Second World War , some of the remaining Auto Union racing cars were transported away by Red Army soldiers . Only one C-type and two D-types remained. The C-Type was the car that Auto Union gave the Deutsches Museum in Munich to exhibit after Bernd Rosemeyer had only contested two or three races with it. During the war, the car was badly damaged in a bombing raid and was shown without a body for a long time. In 1979/80 Audi NSU Auto Union AG restored this C-type: reconstructed the body, overhauled the engine and transmission, etc.

After the dissolution of the Soviet Union , a 16-cylinder mountain racing car type C / D - a hybrid between C and D types - reappeared in poor condition in Riga and was acquired by Audi AG in exchange for a true-to-original copy. The English restoration company Crosthwaite & Gardiner, which had already restored competing Silver Arrows from Mercedes, restored the "Riga car" and made the copy. This copy is now in the Motor Museum in Riga.

Two other type D cars were rediscovered by the US car collector Paul Karassik. In several adventurous trips he managed to bring the parts through the " Iron Curtain " to Western Europe, from where they were flown to Florida . In 1990 Karassik first made contact with experts, and in 1991 with the Audi traditional department, which then worked as a consultant for restoration. The first of the two racing cars was completed in August 1993, and the second one year later. On the occasion of the Eifel Klassik on October 1, 1994 at the Nürburgring, both racing cars were put to the start again for the first time since 1939.

With the purchase of the second Type D double compressor from 1939 from the “Karassik Collection”, Audi has owned three of the five original Auto Union racing cars that still exist since 2012.

The faithful replica of a Type C racing car was handed over to the August Horch Museum in Zwickau on February 17, 2011 . It was created at the historical origin and came about on the initiative of the Museum Association. The racing car project was implemented in two construction stages with the help of experienced senior citizens from the Zwickau automotive industry and engineering interns from the West Saxon University . Construction and construction took a little over seven years. Donations from a number of Saxon institutions, companies and individuals were incorporated into the project. Overall, a value of 1.45 million euros was created.

As far as we know today, original type A or B cars no longer exist. However, a replica of the type A was built, which is in private hands.

In the hill climbs, which were very popular in the 1930s , Auto Union fitted double tires to improve traction on the rear axle . Hans Stuck in particular got along very well with this configuration and was able to achieve numerous victories.

Kurt Becker produced the Auto Union Type A in Berlin in 1947 as a miniature car (mobile toy) on a 1:43 scale.

The special body of the streamlined version of the Type C achieved an excellent Cd value of 0.237, but at the same time had an additional weight of approx. 75 kilos compared to the basic version (despite the extremely lightweight construction).

Audi itself offered the Type C in 2007 as a 1: 2 scale pedal car at a price of 9,600 euros. It was limited to 999 pieces, was made by hand from sheet aluminum on a tubular space frame and consists of more than 900 individual parts. It has chain drive and hydraulic double disc brakes. The leather-covered cockpit is (quote from Audi) "suitable for children up to 1.35 m tall".