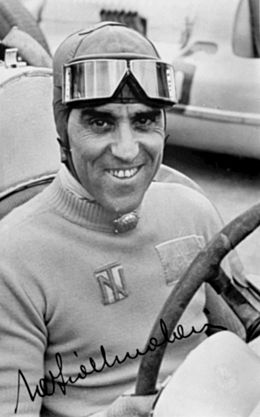 Tazio Nuvolari in a Scuderia Ferrari Alfa Romeo; at the 1935 Pau Grand Prix 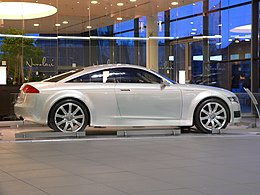 Tazio Nuvolari, known as “Mantovano volante” or “Flying Mantuan”, was already a legend during his lifetime and is still considered one of the best racing drivers in history. Off the track, he was considered a friendly and popular contemporary, but no sooner was he behind the wheel than his fighter nature and his irrepressible will to win came to the fore. He took great risks, often injured himself in accidents and repeatedly achieved the seemingly impossible with inferior equipment.

1920 Nuvolari began with motorcycle race on a 350 cc - Garelli and won the race in 1923 Cicuito di Parma , 1924, he was on Norton Italian Champion in the 500 cc class. In 1925 he won the European Championship in the 350 cc class on Bianchi in Monza . After an accident in which he broke both legs, it was said that he would be able to walk again in a month at the earliest, not to mention racing. A week later he had mechanics put him on the motorcycle and hold it when it started. When he won the race a legend was born.

Nuvolari started racing in 1924 and won his first race on a Bianchi at the Circuito di Tigullio . In 1927 he bought a Bugatti and founded a private racing team with his friend and future rival Achille Varzi . He won the Gran Premio di Roma in 1927 , the Circuito di Alessandria in 1928 and the Mille Miglia endurance race in 1930 .

From 1931 Tazio Nuvolari drove an Alfa Romeo and dominated the Grand Prix European Championship in 1932 with victories at the Grands Prix of Monaco , Italy and France . Quarrels with Enzo Ferrari , then racing director of Alfa Romeo, led to his involvement with Maserati , with whom he won the Belgian Grand Prix in 1933 , among other things . In 1935 he returned to Alfa Romeo and celebrated one of his greatest successes at the German Grand Prix that year. Thanks to his performance in the car, which is far inferior to the German Silver Arrows , this race is considered one of the best Grands Prix ever.

After another forced break due to hospitalization due to the consequences of an accident, Tazio Nuvolari became a works driver in the Auto-Union racing department at the Zwickau Horch factory in 1938 . He took the place of Bernd Rosemeyer , who had a fatal accident in a record attempt at the beginning of the year, and also took over his racing mechanic Wilhelm Sebastian . In the same year Nuvolari won the Italian Grand Prix on the Type D, among other things .

After the Second World War , Nuvolari returned to the racetracks, but was already affected by severe asthma . The 1948 Mille Miglia was his last big race. Seriously ill, he coughed and spat blood, he stepped up and drove his two-liter V12 Ferrari of the type 166 Spyder Corsa beyond the limit of its capacity. He knew it was his last chance and he was dying to win this race. A brake defect threw him out of the race and then he collapsed.

Nuvolari's last race - at the same time the last victory - was the hill climb "Salita al Monte Pellegrino" in Sicily on April 10, 1950 with a Cisitalia - Abarth 204 of the Squadra Carlo Abarth . The result was fifth overall and victory in the 1100 Sport class.

Nuvolari died at the age of 61 from complications from a second stroke. Ferdinand Porsche called him the "greatest driver of the past, present and future".

In honor of Nuvolari , the Gran Premio Nuvolari road race was held from 1954 to 1957 . This race has been continued as a classic car event since 1991.

In February 1994, the nostalgic sports car EAM Nuvolari S1 was ceremoniously presented at the Munich motor show in the presence of the sister and other relative Tazio Nuvolari.

On the 50th anniversary of Nuvolari's death in 2003 , Audi named the Audi Nuvolari quattro concept study presented at the Geneva Motor Show after the Italian racing legend. Nuvolari won the last Grand Prix victory for an Auto Union car and was honored with this sports coupé study. A few years earlier, Alfa Romeo had already presented the Nuvola concept car , the name of which was primarily based on the Italian word for cloud, but was also to be understood as a tribute to Tazio Nuvolari.