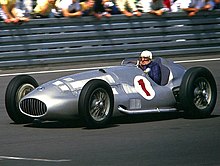 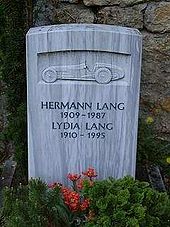 Grave in the Uff churchyard in Stuttgart-Bad Cannstatt

Hermann Lang came from a humble background and had to fight hard to get to the top at a time when racing drivers often came from aristocratic or well-to-do families.

After an apprenticeship as a mechanic, he began his career as a motorcycle racing driver in 1927 and won the German mountain championship for sidecar machines in 1931 . In 1933 Lang became a mechanic in the racing department of Mercedes , where he looked after Luigi Fagioli's car. In the spring of 1935 he took part in test drives in Monza as one of three young drivers , where he impressed race director Alfred Neubauer with his start and his cornering technique. In his first race, at the Eifel race on June 16, 1935 at the Nürburgring , Lang finished fifth and at the Swiss Grand Prix on August 25, 1935 sixth place.

At the 1936 German Grand Prix at the Nürburgring, he broke his finger and still drove eight laps, which earned him great sympathy from the audience.

Lang had a predilection for high-speed lines, he won the Gran Premio di Tripoli three times at the Autodromo della Mellaha in what was then the Italian colony of Italian-Libya and the AVUS race in 1937 in Berlin .

1939 was Hermann Lang's most successful year, he won four Grand Prix ( Pau , Tripolis, Belgium and Switzerland ) as well as the Eifel race on the Nürburgring, the hill climb on the Freiburg Schauinsland and the Viennese high road race . Therefore many of was the President NSKK , the highest at that time national motor sport authority, Adolf Hühnlein declared as the most successful driver of the season unofficially the European Championship, as the international automobile sports federation AIACR had its activities already set due to the outbreak of war. However, according to the point system used in the European Grand Prix Championship up to that point , Hermann Paul Müller ( Auto Union ) would have been the European champion.

In 1943, his book Vom Rennmonteur zum Europameister was published by Knorr & Hirth in Munich .

After the Second World War , Hermann Lang initially started with a Veritas Meteor, which he had acquired from his own resources , before Mercedes-Benz resumed racing in 1951. In two races in Buenos Aires (February 18 and 25, 1951), he finished second and third in a Mercedes-Benz W 154 , which, however, did not meet expectations in the pre-war supercharged racing cars.

A year later the great era of the Mercedes 300 SL began . The works team included Rudolf Caracciola , Karl Kling , Hermann Lang and Fritz Riess . Hermann Lang won the Eifel race in 1952 and, together with Fritz Riess, the 24 Hours of Le Mans ; at the “Prix de Bern” and at the Carrera Panamericana (Mexico) he came second behind Karl Kling.

In a Maserati , Lang finished fifth at the 1953 Swiss Grand Prix and then played a key role in Mercedes' entry into Formula 1 in 1954 . After slipping off the track in third place at the 1954 German Grand Prix , he retired from racing. But he continued to work for Mercedes.

1During the race, Lang took over the car from Rudolf Caracciola , who was unable to drive due to illness, and drove him into second place. With technical problems, he handed over his own car to Walter Bäumer , who then retired.
2 Lang handed his car over to Bäumer during the race after he was injured when a stone smashed his racing driver's glasses in the rain.
3From NSKK declared European Champion.