The title of this article is ambiguous. For the time after the First World War in Germany see interwar period # Germany .

In Europe and the USA, post-war period refers to the period after the Second World War . For Germany and Austria it was also a phase of overcoming the Nazi dictatorship . The post-war period was characterized by efforts to rebuild or restore state order, the economy and infrastructure and to repair the damage caused by the war. These years were often marked by hunger and a shortage of goods of all kinds. From 1947 the post-war boom ("economic miracle") began in Germany as well .

In Europe this time was marked by expulsions from the Polish and former German eastern regions and from the Balkans as well as by the struggle for survival in the cities destroyed by years of bombing and ground fighting. There was great housing shortage and hunger . Millions of former forced laborers, prisoners of war and displaced persons wandered homelessly around Europe as displaced persons . The demographics of several countries in Central and Eastern Europe was permanently damaged due to high war losses (especially of men of working age). Countless physically and mentally injured survivors were added. While in Europe outside the Eastern Bloc from the early 1950s (“ Korea Boom ”) there was usually a rapid economic upswing ( economy ), the reconstruction of the Soviet Union , the GDR and the other Eastern Bloc countries took place much more slowly.

Despite numerous wars and armed conflicts around the world, the two opposing power blocs faced each other in Europe during the Cold War until the beginning of the 1990s without any military conflict (“ atomic battles ”). The often feared Third World War did not materialize.

The last elements associated with the post-war period irrevocably disappeared when the last allies withdrew from Berlin in September 1994.

→ Main articles : Germany 1945 to 1949 , flight and expulsion of Germans from Central and Eastern Europe 1945-1950  and refugees in Schleswig-Holstein after the Second World War

After the end of World War II, much of Europe, especially Germany, was in ruins. The Allies decided after the unconditional surrender of the armed forces a policy of democratization , the demilitarization , the denazification , the decentralization and the dismantling ; From the point of view of large parts of the German population, however, this was the winning policy - only a few were able to view the occupation of Germany as a personal or general liberation from National Socialism . In West Germany, the post-war period became the colloquial time determination for the years after the also colloquial "collapse" of 1945 and at the same time a contrast description to the "pre-war period", to which many now wanted to have their actions directly linked - to continue life . A “liberation” was only publicly propagated in the Soviet occupation zone , the term only appeared in popular parlance much later.

Not for the majority, who had hoped for a final German victory , but for smaller groups it was a real liberation: for the inmates of the concentration camps , for those politically persecuted during the Nazi era (for surviving Jews , Sinti and Roma , for members of the churches, for liberals , social democrats , communists , pacifists , value conservatives), for "deviants" (for example the mentally ill , religious minorities, homosexuals ), for foreign forced laborers and prisoners of war .

For most of the others, unless they were refugees and displaced persons from the eastern regions of the German Reich : they “didn't even notice”, Hitler was “gone” and “the occupation ruled”, most could not do anything with a parliamentary system of government begin or were alienated from this system of government after the failure of the Weimar Republic . For many years the self-perception of Germans as victims and not also perpetrators of the war clearly predominated. The suffering caused by Germans was suppressed or ignored. For example, film screenings about Nazi concentration camps initiated by the Western occupying powers sometimes met with furious rejection; Just a few years after the end of the war, a “line of business” was demanded in relation to “the matter with the Jews” . This widespread mentality was also expressed in the often used term “ zero hour ” for the situation in May 1945.

In the positive, however, the feeling of deep relief prevailed: No more alarms - you can finally sleep through the night again . The exuberance of the carnival celebrations from 1946 to 1949 remained in the general memory for a long time. Because of the desperate conditions, crime flourished in many places, and a weak and overwhelmed police force could hardly cope with it.

Immediate post-war period in the four zones of occupation

In addition to supplying the population, which they tried to secure, the four occupying powers Great Britain , the Soviet Union , the USA and (later to join) France had initially agreed on five goals for the post-war order of Germany : dismantling, demilitarization, denazification, democratization and decentralization (“the five D s "). The victorious powers understood this to mean very different things, sometimes contradicting one another. They pursued these goals in their four zones of occupation more or less energetically and in very different ways, which led to contrary results in view of the emerging bipolar world order of the later East-West conflict .

The Cold War (East-West conflict) that was quickly emerging was of great benefit to the Germans from 1947 onwards, especially the former National Socialists and political criminals. For those born later it is difficult to understand what was not talked about, not even in the family (see taboo ). Instead there was - admittedly not a little - real material for complaints (prisoners of war who did not return home, bomb terror, flight and then displacement, hunger and cold, no information about the whereabouts of the fallen), accompanied by an exaggerated self-pity and great deal of self-pity , which the occupying powers soon noticed Unwillingness to take note of how much crime, suffering and misery Nazi Germany had inflicted on others all around and in its own midst.

See also : Federalism in Germany  and the economic miracle

The development in West Germany 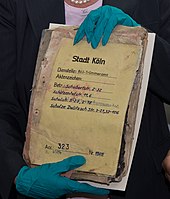 Files of the rubble office of the Cologne city administration

The beginning of the "post-war period" was often associated with the term zero hour . Zero hour was the time of vengeance, displacement and rape, hunger and misery. In more recent observations, with its emphasis on intellectual continuities, the terminus of the "Zero Hour" is seen critical, inasmuch as the "zero hour" in relation to the mental condition of the people falsely the complete destruction of the hitherto prevailing and by the Nazi propaganda captured and suggest changing life plans.

In the emerging Federal Republic, the post-war period can be divided into two parts: firstly, into the so-called “bad times” - hunger, cold, shortage diseases, ruins up to the currency reform of June 21, 1948 - and secondly into the “economic miracle”.

Many of the social behaviors of the people who had experienced the Third Reich , however, remained in West and East Germany.

In the Federal Republic of Germany , reconstruction in the 1950s generated the " economic miracle ". In particular, it left a deep and lasting positive impression that on the Monday after the currency reform, compulsory farming, a holdover from World War II, was practically lifted and industry and retail had prepared themselves: the shops were suddenly full. This phase lasted until the first recession of the Federal shaft Ludwig Erhard and ended with the big mindset shift that then when the time of " 68 movement described" even though they are already around 1965/ 1966 ansetzte, culturally about striking the success of the Beatles or Rolling Stones . The anti-fascist GDR , on the other hand, remained “ the Germany without a 1968”, which was noticeable in many ways after German reunification .

From a youth sociological point of view, it was a time of lifelong memorable shared worlds of experience (housing shortage, narrow fare , swing and jazz music and " rubble literature ", radio series , advertising ) that shaped entire generations - often only comprising a few birth cohorts - namely (firstly) the " Flakhelfer generation "born between 1926 to 1929 (with Helmut Schelsky the" skeptical generation "), but then also (secondary) of rubble children vintages from 1930 to 1943 that still have good memories of their contrast to the" had and bombing "their playgrounds the ruined cities were.

In the months between April 1956 and December 1958, on the other hand, the authorities registered more than a hundred “riot riots” in all major German cities, which caused an uproar in the press and the public.

The development in East Germany

Reconstruction progressed more slowly in the Soviet occupation zone than in the western zones. The Soviet Union did not support East Germany with its reconstruction, but, on the contrary, withdrew reparations : factories were dismantled and taken to the Soviet Union, and factories were transferred to Soviet joint-stock companies . Due to the land reform of 1945/1946 , large landowners with more than 100  hectares as well as war criminals and active NSDAP members were expropriated without compensation and their land was transferred to the respective local land fund. In 1948 a currency reform also took place in East Germany , but this only improved the situation slightly. The black market and bartering flourished there longer than in the west. For economic and political reasons, many people decided to emigrate or flee from the GDR .

The situation slowly improved from 1949 onwards, but people were buying goods in West Germany. In the east, however, food stamps were still issued. It was not until the early 1950s that a slow upturn began. The political leadership did not recognize the continuing dissatisfaction of the population and in 1953 raised production standards. The general dissatisfaction, especially with the poor supply situation, led to the uprising on June 17th . Due to the poor supply situation, many skilled workers migrated from East to West Germany before the Berlin Wall was built , weakening the GDR's economic strength. An economic boom did not begin until August 13, 1961, when the Berlin Wall was built and the inner-German border was closed.