Political map of Europe during the interwar period

The interwar period (in some cases also Latin interbellum ) is understood, especially in Europe , to mean the period between the First World War and the Second World War . It began on November 11, 1918, when the first Compiègne armistice was announced, and ended with the German invasion of Poland on September 1, 1939. 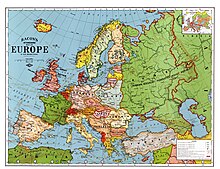 The two decades between the First and the Second World War are unanimously described in historiography as a phase of particularly pronounced political and economic instability and crisis .

Economically , this instability was expressed through phases of hyperinflation (in Germany and Austria from the end of the First World War to 1923), in which many countries tried to finance reparations , war costs and reconstruction through an increased amount of money until the currency collapsed and a currency reform took place, but above all because of the global economic crisis , which began with the " stock market crash " of 1929 and lasted well into the 1930s.

The political instability of the interwar period led to the collapse of many of the young democracies that had emerged in the post-war period and the emergence of a large number of authoritarian regimes (e.g. in Poland , Romania , Estonia, Greece, Austria until 1938 ) and fascist dictatorships (with Italian fascism as Pioneer and in a particularly extreme way in the German Reich from 1933 to 1945 ). Various factors are discussed as reasons for these developments in historical studies, besides the global economic crisis, the emergence of political mass movements directed against bourgeois democracy (as represented by fascism and Marxism-Leninism ), and the polarization of elites.

The term Second Thirty Years' War takes account of this instability in the interwar period and establishes a close connection with the two wars.

The interwar period was not a time of peace. Military conflicts continued to take place in Germany and Europe. At the same time border conflicts developed between many newly independent states of Central and Eastern Europe: Romania fought with Hungary to Transylvania , Yugoslavia fought with Italy to Rijeka , Poland struggled with Czechoslovakia to Cieszyn , with Germany to Poznan (see Wielkopolska Uprising ) and the Ukraine to Galicia (see Polish-Ukrainian War ). The Ukrainians, Belarusians , Lithuanians , Estonians and Latvians fought each other and the Russians. Winston Churchill snapped: "The war of the giants is over, the quarrel of the pygmies has begun."

German Freikorps fought in the Baltic States in 1919 with temporary support from Great Britain against Soviet Russian troops, in 1920/21 in Upper Silesia against Polish insurgents , who were reinforced by regular troops. In the spring of 1920 there was civil war in the Ruhr area . In 1923, the Ruhr area was occupied by French and Belgian troops in Germany . That same year, dared the Communists an uprising in Hamburg , as well as the Munich Beer Hall Putsch the Nazis failed. Militant conflicts were almost the order of the day, especially in the beginning and end of the Weimar Republic.

Poland and Soviet Russia , in particular, were embroiled in military conflicts after 1918 in their efforts to enlarge their territory. In the Polish-Ukrainian war of 1918 and 1919, the armed forces of the Second Polish Republic and the West Ukrainian People's Republic fought for control of Eastern Galicia after the dissolution of Austria-Hungary. Poland and the Soviet Union have been at war against each other since 1919 ( Polish-Soviet War ). From 1918 to 1920, Carinthia and Yugoslavia were in a military conflict . Estonia fought for independence from 1918 to 1920 ( Estonian War of Freedom ), while the Finnish Civil War raged in the first half of 1918 . The Greco-Turkish War lasted from 1919 to 1923 .

During the Irish War of Independence , the Irish Republican Army (IRA) waged a kind of guerrilla fight against the British government in Ireland from January 1919 to July 1921. From June 1922 to April 1923 Ireland was in the middle of a civil war . The Spanish Civil War began in 1936 and lasted until 1939.

The term interwar period is seldom used for developments in Germany between the two world wars because of the sharp turning point in 1933, which divides the interwar period into the Weimar Republic and the period of National Socialism .

The political developments of these years can be broken down as follows:

Likewise, there was no peace on other continents between the two world wars: