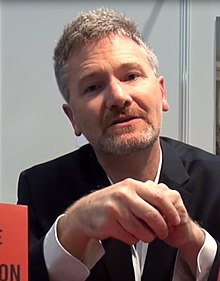 Adam Tooze was born in London in 1967. At the age of six he moved with his parents to Heidelberg , where his father John Tooze started a research position as a molecular biologist . Ten years later his parents separated and he moved back to England with his mother. Tooze studied economics at King's College (Cambridge) and at the Free University of Berlin . He received his Ph.D. in 1996 from the London School of Economics and Political Science. PhD . In his dissertation, which was awarded several science prizes, he dealt with the connection between the emergence of modern national statistics and the crisis of the German state between 1900 and 1945. Tooze has taught economic history at Jesus College at the University of Cambridge since 1996 . In 2009 he became Professor of Modern German History at Yale University . In 2015 he moved to Columbia University in New York.

He is a member of the independent commission of historians that was set up by the Federal Ministry of Finance on July 14, 2009 to clarify the Nazi entanglements of the Reich Ministry of Finance . Tooze became known to a wider German public with his criticism of Götz Aly 's book Hitler's People's State .

In his 2015 German book Sintflut. The Reorganization of the World 1916–1931 Tooze reinterprets the time since the First World War . He brings the role of the United States to the fore. For Tooze, the post-war order is characterized by the dominance of liberal, capitalist democracy - represented especially by the USA - which only came under serious pressure with the Great Depression since 1929. In contrast to earlier interpretations, in which the USA in the 1920s appeared to be more isolationist and not involved in world politics, Tooze sees it in the central role, a role of economic and diplomatic dominance. Even President Woodrow Wilson was by no means an idealistic dreamer, but a consistent power politician who successfully established the USA as a world power in order to secure a Pax Americana . The opponents of the liberal model - fascists, National Socialists, communists - would have recognized this dominance. The radicalism and violence of their alternative models can partly be explained by the fact that they consider the American liberal model they are fighting to be so powerful and difficult to conquer.