This article deals with the German Ministry of Finance. 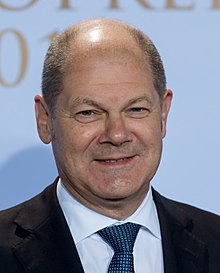 The finance minister is next to the interior , foreign , justice and defense ministers (formerly the post office minister was also one of those government members who head one of the remaining so-called classic departments) . This designation has the background that there were only these business areas in the first German Reich government . To emphasize this, the specific article is used in the name . In addition to the Ministry of Justice and the Ministry of Defense, the Ministry of Finance is also one of the three federal ministries that are expressly mentioned in the Basic Law ( Art. 112 S. 1 and Art. 114 Para. 1 ) and whose status as such may not be affected (otherwise it stands the Federal Chancellor is free to set up or dissolve ministries within the framework of his organizational powers).

After the dissolution of the Imperial Treasury Office , the Reich Ministry of Finance was founded in the Weimar Republic . This was the forerunner of today's ministry. The creation of the Ministry in 1949 was immediately preceded by the Joint Finance Council created in 1947 .

After the Federal Treasury was dissolved in 1969, some of its tasks were transferred to the Ministry of Finance.

Due to the capital city resolution ( Berlin / Bonn law ) of the German Bundestag , the headquarters of the ministry was gradually moved from Bonn to Berlin in the mid-1990s. One office remained in Bonn.

Since 1998 the Federal Ministry of Finance has also been responsible for issuing postage stamps with the designation Germany .

Competence at the federal level

The main responsibilities lie in tax and budget policy ( state finances ) as well as in European financial policy.

In addition, the Ministry has, among other things, the legal and technical supervision of the following higher federal authorities :

Headquarters of the Federal Ministry of Finance in Berlin (2019)

The first official seat of the Federal Ministry of Finance is the Detlev-Rohwedder-Haus on Wilhelmstrasse in Berlin.

The building was built during the Nazi era in 1935/1936 according to plans by the architect Ernst Sagebiel and after its completion it was the seat of the Reich Aviation Ministry (RLM) until the end of the war in 1945.

In 1949 the building of the venue for was the German People's Council , which on 7 October 1949 by enactment of the Constitution in the grand ballroom, the GDR founded and there as a provisional People's Chamber was constituted. Subsequently, several specialist ministries were housed in the complex, whereupon the building was officially designated as the House of Ministries of the GDR.

After it was renovated and rebuilt between 1994 and 1998, it has served as the headquarters of the Federal Ministry of Finance since 1999.

At EU level , the main responsibility of the Ministry of Finance lies in coordinating European economic and monetary policy on behalf of the Federal Government. In addition, the ministry participates in the preparation and control of the EU budget and is responsible for the EU regulatory areas of customs , taxes and financial services.

The main body in which the Federal Ministry of Finance is active at EU level is the Council for Economics and Finance (ECOFIN) . The Federal Minister of Finance represents Germany in ECOFIN. ECOFIN meets around ten times a year. In addition, the finance ministers of the member states hold an informal meeting in the country of the Council Presidency at least once every six months.

The EU information center is also located in the Federal Ministry of Finance , which is the point of contact for citizens' questions on European legislation, EU funding programs and EU policy areas, as well as an intermediary for various sources of information.

A self-titled "essential goal" of the BMF in European policy is the stabilization of the euro and the European Economic and Monetary Union . To achieve this goal, the BMF advocates reformed financial market supervision in Europe, closer coordination and monitoring ( European semester , reform of the Stability and Growth Pact , Euro Plus Pact, etc.) and rescue measures ( ESM , EFSF, etc.).

In addition, the BMF is in a leading position within the Federal Government and in cooperation with the European Court of Auditors , the European Commission and the European Anti-Fraud Office (OLAF) for the correct and efficient use of paid European subsidies .

After Alex Möller resigned in protest against the debt policy of the other ministries, the finance department was subsequently co-managed by the respective economics minister , initially by Karl Schiller and later by Helmut Schmidt , before the original division was restored.

This amalgamation had briefly occurred before, when the FDP ministers resigned in the second cabinet under Ludwig Erhard , Kurt Schmücker was at the head of both ministries. This personal union ended with the formation of a grand coalition under Chancellor Kurt Georg Kiesinger less than a month later.