Meeting of the People's Chamber of the GDR under the direction of Hans Jendretzky in the plenary hall of the Palace of the Republic in East Berlin, November 1989

The People's Chamber was until October 2, 1990 October 7, 1949 Parliament and nominally highest constitutional body of the German Democratic Republic (GDR).

Postage stamp for the first Volkskammer election in 1950 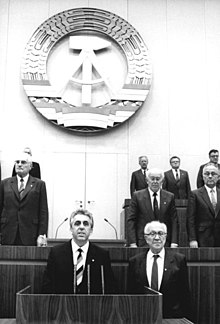 The Provisional People's Chamber was formed on October 7, 1949 in East Berlin from the Second German People's Council . The first election of the People's Chamber took place on October 15, 1950, delayed and according to a different electoral system than originally planned. The elections from 1950 (see People's Chamber Election 1950 ) were based on unified lists of the National Front . Since the result was certain beforehand, many GDR citizens folded the ballot paper and threw it into the ballot box unread . This process was popularly called “going to fold”. The only free elections were the People's Chamber election in 1990 and the local elections that still took place afterwards . In many places, the elections were no longer held in secret: although voting booths were there, their use was seen as a sign of opposition to the system. According to official figures, the turnout was 98% and 99.7% voted for the National Front. After the end of the GDR, files from the Ministry for State Security showed that extensive election fraud had been carried out. Election manipulation was also the rule in later elections to the People's Chamber. In their voting behavior, the MPs were bound by the political guidelines of the SED. Until 1958 there was a state chamber in addition to the people's chamber , which never made use of its right to introduce bills to the people's chamber and to raise suspensive objections to legislative resolutions.

According to the understanding of the Soviet occupying power and the SED, the People's Chamber was not a parliament in the bourgeois sense of a representative democracy , but was intended to represent a new type of popular representation. You should postulated by the claims in civil parliamentarianism not given unity between political leadership and the people establish and party selfishness , partisanship for the capital , personal enrichment addiction and self-blockade of powers to exclude.

The only vote of the People's Chamber in which conflicts became publicly known was in March 1972 the vote on the law on the interruption of pregnancy to introduce the deadline solution for abortions , in which 14 members of the CDU voted against the law after consultation with their party leadership. These votes against and some abstentions had no effect on the legislative process to resolve the deadline, but on the other hand increased the legitimacy of the People's Chamber, as in this case the public appeared to be a real, arguing body .

In fact, the People's Chamber largely had no influence on political events, because the SED's claim to leadership, which had been officially anchored in the constitution of the German Democratic Republic since 1968, prevented parliament from exercising any real political influence from the start.

Presidium meeting of the People's Chamber, 1988

The People's Chamber usually met two to four times a year; according to Section 6 of the Rules of Procedure, the meetings were generally public. It met between 1950 and 1970 in the Langenbeck-Virchow-Haus . After that, the congress hall on Alexanderplatz served as the conference venue. From 1976 their meetings took place in the small hall of the newly built Palace of the Republic . After the Palace of the Republic was closed in September 1990, the People's Chamber last met in the house on Werderschen Markt .

The People's Chamber had the following committees:

The Volkskammer had 400 seats until 1963, then 500. Up to the 5th electoral period (1967–1971), 66 Berlin representatives of the Volkskammer belonged to the Volkskammer in an advisory capacity, after which they were normal MPs. Since the end of 1958, 100 and later 200 successor candidates took part in the meetings and committee work. These had no right to vote in the votes, but were otherwise largely on an equal footing with the regular MPs.

In addition to all the important SED party functionaries and chairmen of the other parties, prominent MPs included prominent athletes such as Heike Drechsler or Täve Schur and worker activists as well as veterans of the socialist movement and the GDR construction such as Rosa Thälmann , Kurt Krjeńc , Käthe Kern and Wilhelmine Schirmer Pröscher .

The results of the Volkskammer elections (partly also popular elections ) from 1950 to 1986 are not considered democratic.

President of the People's Chamber

The freely elected People's Chamber in 1990

After the political turnaround and peaceful revolution in the GDR triggered by civil protests in 1989 , the only free parliamentary elections were held on March 18, 1990. For the first time, the power of parliament corresponded to that of parliaments in bourgeois democracies. With the Land Introduction Act , the People's Chamber created the new federal states , which became part of the Federal Republic when they were founded. The GDR was thus abolished. At the same time, the People's Chamber initiated a “minimum legal framework” for the new states, which immediately had state law upon their establishment . It is true that the Unification Treaty , which was, inter alia, regulated which federal laws in the accession area should not apply or only apply in modified form, was negotiated by the governments, but the government factions had formulated a wealth of conditions in advance (such as the existence of the land reform ) that were incorporated into the treaty.

At the constituent meeting on April 5, the Presidium of the People's Chamber was entrusted with the powers of the no longer occupied Council of State by inserting Article 75a into the constitution of the GDR . The President of the People's Chamber, Sabine Bergmann-Pohl (CDU), who was elected on the same day , was given the powers of the Chairman of the State Council and was thus formally the last head of state of the GDR.

On April 12, 1990 Lothar de Maizière (CDU) was elected Prime Minister of the GDR with 265 votes, 108 against and 9 abstentions . The MPs then also confirmed en bloc the cabinet de Maizières , the first and last freely elected government of the GDR.

In its historic session on August 23, 1990, the People's Chamber decided that the GDR would join the Federal Republic of Germany with effect from October 3, 1990, and thus the end of the GDR as a subject of international law .

The chairmen of the SPD parliamentary group were:

The chairman of the PDS parliamentary group was Gregor Gysi during the entire legislative period .

The parliamentary group of the DSU had only one chairman, Hansjoachim Walther , from March to October .

Alliance 90 formed a group with the Greens , which had no group chairman, but several group spokesmen. The spokesmen for the group were:

Thomas Klein , who was elected through the United Left , remained non-attached .

Commons : People's Chamber of the GDR  - collection of pictures, videos and audio files

Members of the People's Chamber of the GDR after electoral terms

President of the People's Chamber of the German Democratic Republic