Maleuda was the son of a working class family. His hometown was one after the war, and integration into Poland for Province Posen . Here he worked as a farm worker on a Polish farm from 1945 to 1947 before he and his family were expelled to Thuringia . From 1948 to 1950 he completed an agricultural apprenticeship on the farm in Henfstädt and in VEG Meiningen and then from 1950 to 1952 he attended the agricultural college in Weimar , which he graduated as a state-certified farmer. From 1952 to 1955 he attended the German Academy for Political Science and Law in Potsdam , which he left with a degree in economics. 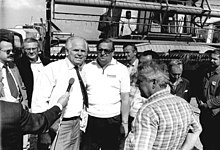 When the DBD wanted to merge with the GDR CDU , he criticized this step, resigned from the party leadership of the DBD on June 25, 1990 and did not become a member of the CDU.

On November 13, 1989, after the resignation of Horst Sindermann, he was elected President of the People's Chamber. His term of office ended on April 5, 1990, when the first democratic people's chamber elected Sabine Bergmann-Pohl as president. As co-initiator of the Central Round Table , he campaigned for a non-violent transition to the system of parliamentary democracy in the GDR.

From 1994 to 1998 Maleuda was a member of the German Bundestag . He was drafted into the Bundestag as a non-party top candidate via the state list Mecklenburg-Western Pomerania of the PDS and worked as an agricultural advisor to the PDS. In 2000/02, Maleuda was an advisor to the party financing commission set up by Federal President Johannes Rau . He was an employee of the Alternative History Forum Berlin in the Society for the Protection of Civil Rights and Human Dignity eV

Günther Maleuda was non-denominational. He was married and had three children. He died after a long and serious illness.

President of the People's Chamber of the German Democratic Republic

Chair of the DBD

Chairwoman of the district council hall of the DBD