Farm workers' house in the museum village of Cloppenburg : The house in Gulfhaus construction includes both a residential wing and a stable or barn wing 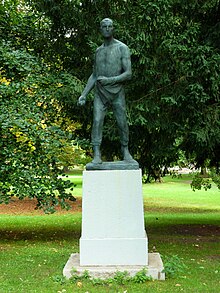 As a farm worker workers are in agriculture referred to not have its own agricultural land and have their labor to wage provide.

While the importance of this class in Western Europe and North America has been declining since the middle of the 20th century, it encompasses large parts of the population in East Asia and Latin America and increasingly harbors social fuel. In South America , the transition between farm workers and smallholders is fluid and, due to the growing indebtedness of the latter, has led to the emergence of countless landless movements since around 1980 (e.g. the MST in Brazil).

Throughout the 20th century and to this day, Mexican Americans have played a significant role in California's agriculture. In the United States , the United Farm Workers union , led by César Chávez, succeeded in organizing large numbers of farm workers in the 1960s .

In Spain , many African migrants , often without a legal residence permit, are employed in agriculture. In February 2000 , racist riots against Moroccan workers broke out in the Andalusian city of El Ejido .

“ In 1991, Germany introduced the status of seasonal worker in agriculture, forestry and the hotel sector. To this end, bilateral agreements have been concluded with Poland, Romania, Hungary, Slovakia, the Czech Republic, Croatia, Slovenia and Bulgaria. The employment contracts are limited to three months. "