Building of the council of the district of Halle, from 1990 regional council Halle, since 2004 state administration office Saxony-Anhalt

The Halle district was established in 1952 after the dissolution of the states in the GDR as one of a total of 14 districts from the southern part of Saxony-Anhalt .

Halle was developed as a "chemical workers' district". Together with Merseburg and Bitterfeld / Wolfen, Halle forms the central German chemical triangle . The district was shaped economically

and other industries such as food and consumer goods production.

The district comprised the urban districts of Halle , Dessau and Halle-Neustadt (from May 12, 1967) as well as the following districts:

The council of the district as the middle state administrative level had its seat in Halle. a. the district planning commission.

Chair of the District Council 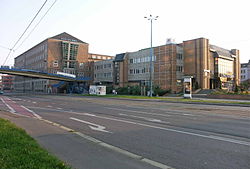 Building complex of the SED district management in Halle until 1990

The written records of the District Assembly and Council of the Halle District (1952–1990) are now kept in the Saxony-Anhalt State Archives in the Merseburg department . The stock has the stock designation M 501 .

Districts of the German Democratic Republic