Nakhon Pathom is located about 50 kilometers west of the capital Bangkok in the middle of a wide plain through which watercourses flow, for example the Mae Nam Tha Chin (Tha Chin River). Sugar cane has been grown here since the late 18th century . Old travel reports describe that near Nakhon Pathom on Tha Chin there were sugar factories every four to five kilometers, surrounded by around ten to fifteen houses and firmly in Chinese hands.

2000 years ago, Nakhon Pathom was located on the Gulf of Thailand , which is, however, steadily retreating to the south as a result of sedimentation . Nakhon Pathom, along with Ratchaburi and Sing Buri, is considered to be one of the oldest cities in Thailand, whose founding dates back to around 40 BC. Is dated. For a long time it was one of the major capitals of a respected kingdom of the Mon ( Lop Buri as far as Malaysia ). The Indian King Ashoka sent at that time monks to Siam that the Theravada Buddhism should make known. They came to Nakhon Pathom and traveled the country from there. This is how the city sees itself as having spread Buddhism throughout Siam.

In April 1842, there were problems between three groups of Chinese who had formed secret societies , each consisting of about 1,000 men. The leaders of these groups were called Khim, Ia and Phiao (Piaw). The Siamese government sent soldiers under the command of Phra Sombat Wanit to arrest the leaders. In fact, Khim and Phiao were initially thrown into dungeon, but Ia was able to flee. He and his people then robbed the houses in the Samut Sakhon and Nakhon Pathom area. They could only be overwhelmed after a major police operation.

In the 1830s, Nakhon Pathom was a dilapidated town with 300 houses and around 12 Buddhist temples. There was also the famous sanctuary of the monks at Bang Thammasala.

Sugar cane is grown in the area, in the past to produce edible sugar, today it is also used to produce eco-fuel.

Nakhon Pathom has a train station on the Southern Railway , which connects Bangkok with Malaysia . 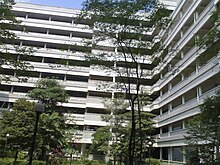 North wing of the Faculty of Engineering and Industrial Technology, Silpakorn University

The Sanam Chan Palace campus of Silpakorn University is located in Nakhon Pathom .