Nakhon Pathom is located about 50 kilometers west of the center of the state capital Bangkok . However, Bangkok has already expanded to the boundaries of Nakhon Pathom.

The climate is tropical - monsoonal .

Mainly Thais live in Nakhon Pathom . In addition, there are also descendants of the Lao Khrang laborers who were abducted by Siamese from Laos (the total number in Thailand is 53,000).

The table below shows the share of the economic sectors in the gross provincial product in percent:

The following land use is documented for the province:

Originally Nakhon Pathom was a city on the coast of the Gulf of Siam , but the coastline changed as a result of sedimentation by the Chaophraya. After the course of the Tha Chin had changed and the city slowly dried up, the population moved to Nakhon Chaisi (or Sirichai).

Historians assume that Nakhon Pathom was settled as early as the 3rd century BC . In any case, Buddhism was introduced to Siam from here. The Indian ruler Asoka sent the two monks Phra Utara and Phra Sona here to bring Buddhism to this "golden land" ( Suvarnabhumi ). That is why there is one of the world's largest Buddhist buildings, the great Chedi, in the city, which was inspired by King Rama IV. Mongkut . The chedi houses relics of the Buddha .

During the reign of King Rama I (r. 1782-1809) a comprehensive tax system was introduced, including for alcohol. Nakhon Pathom was named Nakhon Chaisi it together Suphan Buri and Samut Sakhon managed 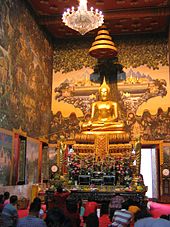 Phra Pathom Chedi, the highest Buddhist stupa in the world and the most important landmark in the province

The seal of the Nakhon Pathom Province shows the Phra Pathom Chedi , the largest chedi in the world. It is located in downtown Nakhon Pathom . In 1860 King Rama IV Mongkut had the pagoda rebuilt. That is why the seal also adorns the royal crown.

The local tree is Diospyros decandra .

The motto of Nakhon Pathom Province is:

"The province of pomelos , sweet and pleasant,
The country with white rice ,
The local daughters are the most beautiful
Khao Lam, sticky rice in bamboo sticks , is extremely tasty. "

The province also has 23 thesaban ('municipalities') - including a "large city" (the provincial capital), four "cities" (Sam Phran, Rai Ching, Krathum Lom and Nakhon Pathom) and 18 "small towns". There are also 93 tambon administrative organizations for rural areas that do not belong to any municipality.