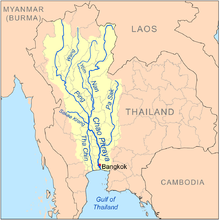 It begins at the confluence of the Ping and Nan Rivers in Nakhon Sawan . Other important tributaries of the Chao Phraya system are the Yom , the largest tributary of the Nan, which runs almost parallel to it from Phitsanulok to Chum Saeng north of Nakhon Sawan (only a few kilometers from the origin of the Chao Phraya), and the Wang , which ends in the ping at Tak Ok ( Tak Province ).

The Chao Phraya flows from Nakhon Sawan through the central lowlands about 370 kilometers to Bangkok , where it flows into the Gulf of Thailand at the junction of the Indochinese and Malay peninsulas . At Chai Nat , the river divides into the main arm and the narrower Mae Nam Tha Chin (Tha Chin River), which flows into the Gulf of Thailand at Samut Sakhon about 35 km west of Bangkok. The Chao Phraya Dam is also located in Chai Nat .

In addition to Bangkok, the old capital Ayutthaya and the smaller provincial capitals Uthai Thani , Chai Nat , Sing Buri , Ang Thong , Pathum Thani , Nonthaburi and Samut Prakan are on the Chao Phraya. It is an important traffic artery in Thailand and also serves with many canals ( khlongs ) for irrigation of the rice-growing areas .

On historical maps, the Chao Phraya is usually only referred to as "Menam", also "Mae Nam", which is the Thai word for river . In the English-speaking world, it is also often called the River of Kings due to its historical significance .

In feudal Siam, Chao Phraya was a high nobility title , translatable as duke or margrave , whose holder served as minister of state or governor of an important city. The English geographer James Fitzroy McCarthy stated in his records in 1900 that the name means that it is the main river in the country.

The current course of the lower Chao Phraya was only established in the middle of the 19th century. In the past, the river often looked for a new bed after the annual flooding, for example south of Chai Nat down to Ang Thong a former river course can be seen, which is located a few kilometers west of today's river. Siamese engineers later tried to influence the course: they built a dam at Ang Thong in 1813 to straighten the course of the river as far as Ayutthaya. The dam broke repeatedly, so this project was eventually abandoned.

The engineers south of Ayutthaya were more successful: from 1538 to 1722, by building canals, they were able to shorten the distances that merchant ships had to cover from the Gulf of Siam to the capital Ayutthaya by 62.3 kilometers:

Impressions of the river course

Mega Bridge over the Chao Phraya