The central prang of Wat Arun

The temple was built during the Ayutthaya period and was originally called Wat Makok ( วัด มะกอก - Olive Temple). When Thonburi became the capital of the new Siamese Empire after the fall of Ayutthaya , King Taksin built his palace in 1768 on the area of ​​the old Fort Wichayen, which has been guarding the entrance to the Siamese Empire by ship since the beginning of the 16th century. Two temples, Wat Makok and Wat Tai Talad (today Wat Moli Lokayaram) were included in the palace grounds. Monks were then no longer allowed to live in either temple, as is the case today at Wat Phra Kaeo , which is located on the grounds of the Grand Palace. The king changed the name from Wat Makok to Wat Chaeng ( วัด แจ้ง ). When Chao Phraya Chakri , who later became King Phra Phutthayotfa Chulalok (Rama I), brought the emerald Buddha , which he had looted in Vientiane , in a solemn procession to the capital, the holy Buddha statue in the temple of the king, in the Wat Chaeng his temporary shelter.

After the fall of Taksin the Great, King Phra Phutthayotfa built a new temple for the Emerald Buddha on the opposite bank of the river, where he moved in 1784. He then reduced the palace grounds and invited new monks to move into the orphaned temples. During the reign of King Phra Phutthayotfa, the Crown Prince - the future Rama II - restored the Wat Chaeng temple by increasing the prang, which was only 16 m high at the time, to the size it is today, worthy of a grandiose "capital of angels". As King Phutthaloetla Naphalai (Rama II) , he named the temple Wat Arunratchatharam . The renovation work was only finished under King Nang Klao (Rama III) . King Mongkut (Rama IV.) Gave it the current name Wat Arunratchawararam .

The Phra Racha Wang Derm , the "original palace" of King Taksin, as it is still called today, has been restored. It is located directly south of Wat Arun on the site of the Thai Navy, as is the remains of the Wichayen Fort, which was later renamed Wichaiprasit Fort. The old fortifications of the fort can still be seen from the river at the mouth of the Klong Bangkok Yai. Direct access is no longer possible for the public.

As a sign of the changing times, the American Sean Patrik was ordained a monk in 2005 as the first foreigner in the 300-year history of the temple.

Detailed view of the Prang 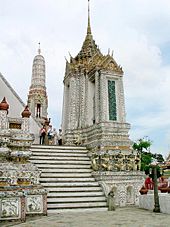 The center of Wat Arun is Phra Prang , as the central prang is reverently called. Four steep stairs on the four sides connect a total of four levels on which the Phra Prang can be circled. On the lowest level there are four smaller prang at the four corners of the square floor plan. They are dedicated to the wind god Phra Phai , whose statue, sitting on a white horse, looks out of small alcoves in all four directions. The stairwells are each flanked by oversized stone statues of Chinese warriors. The second level is carried by demons ( yakshas ) as caryatids . Here are four portal-like Mondop on the four sides , in which important stations in the life of the Buddha are depicted, such as B. His birth and enlightenment. Small niches are set up between these levels, in which Kinnara and Kinnari figures (mythological beings - half human, half bird, inhabitant of the Himaphan forest on the slopes of Mount Meru ) are depicted. The third level is carried by monkeys, characters from the Ramakien epic. Here, too, there are niches with Kinnari figures. Finally, the fourth and topmost level is carried by Devatas , heavenly beings. Above the stairs there are small alcoves on all four sides with statues of the Hindu god Indra , the ruler of the Tavatimsa heaven. He rides his traditional mount, the three-headed elephant Erawan . The top of the tower is supported by figures of the god Vishnu, who rides on the mystical bird Garuda. On the top of the tower - as is traditionally customary for a prang - a vajra is attached, the "weapon of Indra", which in turn is crowned by a golden crown that was originally intended for a Buddha statue. However, King Nang Klao (Rama III) ordered that this crown should be placed on top when the enlargement of the Phra Prang was inaugurated.

The entire complex is covered with a mosaic of brightly colored Chinese porcelain and shells, a total of around a million pieces that are arranged in flower patterns.

Directly east of the Phra Prang are two smaller buildings, the Wihan Noi ("little Wihan ") and the Bot Noi ("little Ubosot "). Both are connected by a small archway, which is the entrance for tourists to the main attraction. The two buildings date from the Ayutthaya period. The northern building is the Bot Noi. It was the original ubosot of the temple where King Taksin spent his monastic days. Here is the royal couch, which was made from a single teak trunk. In Wihan Noi there is the so-called Chulamani Pagoda , a metal chedi, at the four corners of which the “guardians of the four cardinal points” ward off evil influences from all directions.

The archway with a crown

North of the Phra Prang is the entrance portal to the Ubosot, which consists of a baroque entrance gate covered with a crown ( Mongkut ). It is decorated with colored ceramics and stucco and flanked by two cells in which there are statues of two men, Nai Ruang and Nai Nok , who had a reputation for special piety. In front of the portal there are two huge guardian statues (yakshas) covered with faience . They correspond to the statues that guard the entrances in Wat Phra Kaeo . The figures come from the Ramakien , the Thai version of the great Indian epic Ramayana . The white is called "Deja Sahassa" and Green is "Thosakan" (of Ravana called from the Ramayana). 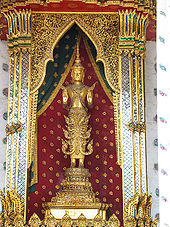 The ordination hall ( Ubosot ) is surrounded by a walkway ( Phra Rabieng , also called Phra Wihan Khot ). It was built from bricks during the reign of King Phutthaloetla (Rama II) , the roof is covered with green and orange ceramic tiles. In the gallery, rows of Buddha statues sit in front of painted walls, all in the posture of "Submission to the Mara". In front of the entrances to the inner courtyard there are pairs of bronze elephants. In the marble-tiled inner courtyard there are numerous stone sculptures of warriors and noblewomen, wise men and singhas (mythological lions) as well as children with domestic animals of Chinese origin. They were brought from China to Siam as ballast on merchant ships over 100 years ago .

The ordination hall stands symmetrically in the middle of the inner courtyard. It was built during the reign of King Phutthaloetla (Rama II) from masonry bricks in the style of the Ayutthaya period. The roof is covered with orange and green ceramic tiles. It is supported by white, octagonal pillars with gilded lotus capitals. Between the two eastern and western entrances of the Ubosot, Phra Phuttharup Narumit , a standing Buddha statue in "royal regalia" is depicted in its own alcove. The interior walls of the ordination hall are painted with murals depicting stories from the last ten lives of the Buddha ("Jataka"). The originals were destroyed by fire during the reign of King Chulalongkorn (Rama V) , but were renewed on behalf of the king.

The main Buddha statue in the Ubosot is shown in the hand position "Submission of the Mara". According to legend, King Phutthaloetla (Rama II) is said to have modeled it himself. He called it "Phra Buddha Dhammamitsara Ratchalokathatdilok". The king's ashes are kept in its base.

Wat Arun with the Sala Tha Nam on the far right

To the east of the Phra Prang on the river are six pavilions ( Sala ) in Chinese style, which in Thai is called Kaeng Chin ("Chinese Shrine"). The pavilions are made of green granite and have jetties facing the river.

“Behind”, ie west of the Phra Prang and south of the ordination hall, there is a Wihan , which was built in the style of the Thonburi period. The outer walls are covered with colored tiles, the roof also with green and orange ceramic tiles. Inside is a gilded copper Buddha statue from the reign of King Nang Klao (Rama III), in whose chest a relic of the Buddha was allegedly found in September 1953. The statue sits in the "Submission of the Mara" posture and has a span of 3 m from knee to knee. It has the longest name of a Buddha statue in Thailand: Phra Phuttha Champhunut Mahaburutlakkhana Asitayanubopit . Another, smaller bronze statue called Phra Arun , also called Phra Chaeng, was brought here from Vientiane in 1858.

It was also this Wihan that housed the Emerald Buddha for five years, which was captured in Vientiane in 1779. King Phutthayotfa Chulalok (Rama I) had Wat Phra Kaeo built for him on the opposite bank , where he was brought on March 22, 1784.

Wat Arun, Mondop of the Footprint

An airy mondop is located between the Wihan and the corridor of the ordination hall . Its white outer walls are covered with a floral pattern. Inside there is a footprint of the Buddha (Phra Bat). To the north of the Mondop there are two three-story bell towers, symmetrical to the Wihan.