The buildings south of the Upper Terrace 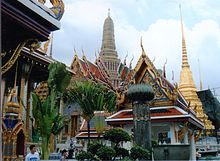 The upper terrace with 4 main monuments

Outbuilding (north below the upper terrace)

East of the Upper Terrace 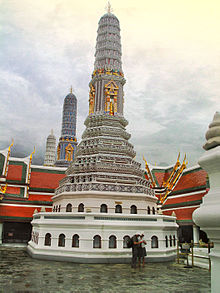 Three of the eight prangs

When Chao Phraya Chakri , the future King Phutthayotfa Chulalok (Rama I), wanted to relocate the new Siamese capital to the eastern side of the Mae Nam Chao Phraya ( Chao Phraya River ) for strategic reasons , it had been there for more than 100 years the temple Wat Potharam (today Wat Phra Jetuphon, Wat Pho ) and to the north of it Wat Salak (today Wat Mahathat ). The area in between was very swampy and had to be drained first. The residents, a settlement of Chinese merchants, were "asked" to move their businesses to the so-called "gardens" in front of the city (today's "Sampheng").

On Sunday, the tenth day of the waxing moon in the year of the tiger, in the fourth year of the decade Chunlasakarat 1144, i.e. in the year 2325 of the Buddhist calendar, in the morning at 6:54 am there was a ceremony of the "laying of the foundation stone" (placing the city pillar on Thai: Lak Mueang , opposite the Grand Palace). After the founding of the Grand Palace, King Phutthayotfa Chulalok was officially crowned king in a royal ceremony on June 10, 2325. (Quote from a memorial stone in front of the Bangkok city council).