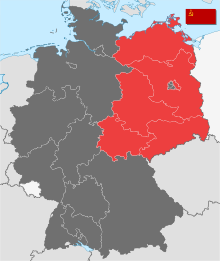 The countries of the Soviet-occupied zone (1947)
(East Berlin is colored red like the countries.) 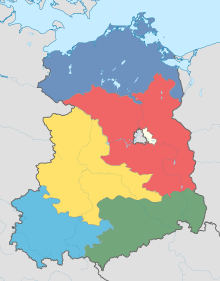 The countries that in 1945 as a state administrative units of the Soviet occupation zone were assigned (SBZ), while there from December 1946 state constitutions have been adopted since 1949 belonged to the Democratic German Republic (GDR).

After the 2nd SED party conference, all state authorities were dissolved again in July 1952 and replaced by 14 “ councils of the districts ” in the sense of a central state planning system. In addition to the 14 districts that served the administration, the eastern part of Berlin was led by the Magistrate of Greater Berlin . The Land Chamber of the German Democratic Republic was dissolved in 1958 and the last formal remnants were removed with the constitutional reform of 1974 .

On October 3, 1990 the states were re-established as member states of the federal government . For comparison: the countries of the German Empire (1925)

By order of the Soviet Military Administration in Germany (SMAD) on July 9, 1945, three federal states and two Prussian provinces were initially established as administrative units in the Soviet Zone . After the dissolution of Prussia by the Control Council Act No. 46 of February 25, 1947, the latter also became Länder. East Berlin was a "democratic sector" of the four-sector city of international law at no time "integral part" of the Soviet occupation zone or the GDR and therefore belonged neither to one of the five countries have made it a separate country.

First, so-called advisory assemblies were appointed as pre-parliaments , which controlled the - also appointed - administration until the meeting of the first state parliaments after the state elections on October 20, 1946 . After the SED failed to achieve the desired absolute majority in this semi-free election despite the considerable disadvantage of the other parties - in Saxony-Anhalt even a CDU and LDP government was formed - the right to vote was changed. In future elections, only the single list of the National Front could be elected, which guaranteed the SED's claim to leadership. 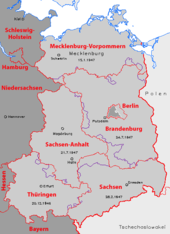 Between December 1946 and February 1947, the federal states adopted their own constitutions. For the later state of Mecklenburg, the name "Mecklenburg-Western Pomerania" was initially planned by the German side, and this name was also chosen in draft constitution. In 1947, however, the SMAD made it clear that the order to found the state only referred to the “Mecklenburg administrative region” and the addition “Western Pomerania” was therefore inadmissible.

With the establishment of the GDR in 1949 , the state institutions lost a large part of their powers, since the GDR, unlike the Federal Republic, was only formally designed as a federal state . The constitution of the GDR transferred the legislative competence in all areas of the republic to the central state . The federal states could therefore only enact their own laws in areas that were not centrally regulated. The representation of the federal states at the federal level, the Land Chamber of the GDR, had the right to object to laws, but could be overruled by the People's Chamber .

In the state elections on October 15, 1950 , the unified list officially received over 99% of the votes cast in all federal states, with an official turnout of over 98%. On July 23, 1952, the remaining tasks of the state authorities were transferred to the newly created districts with the "Law on the further democratization of the structure and functioning of the state organs in the GDR states", thus de facto sealing the end of the states. In 1958 the GDR Land Chamber was finally dissolved. However, the countries continued to exist formally - albeit politically insignificant for a long time; It was not until the GDR constitution of 1968 and the far-reaching constitutional changes of 1974 that all federalist elements of statehood in the GDR were eliminated in order to enforce the principle of “ democratic centralism ” against the model of a representative and free basic order.

In July 1990, the Land Introduction Act resolved to abolish the districts with the accession of the GDR to the Federal Republic of Germany and to replace them with five federal states. The borders of the federal states were redefined, whereby the district borders were partially adopted. In some districts, referendums were also held on country affiliation. The state of Mecklenburg was given the name Mecklenburg-Western Pomerania, which it had briefly used in 1947. As the new federal states , the five states emerged at the same time as the fall of the GDR through German reunification on October 3, 1990, and became states of the Federal Republic of Germany .

Countries of the German Democratic Republic (until 1952)