A round table is often used as a symbolic seating arrangement. For example, at a conference to clarify divergent interests or to overcome crises , in which representatives of different institutions want to find a compromise that is recognized by all sides , with equal rights, without hierarchical levels or chairmen .

A historical example are the round tables at which the revolutions of 1989 were negotiated.

The term is related to the legendary round table at the court of King Arthur ( French table ronde , English round table ) and encompasses both the medieval and the modern meaning.

The round table is also a form of public participation in dialogue and participation forums to promote cooperation between social institutions and citizens.

Use in the collapse of the Eastern Bloc

Round table discussions in Poland in 1989

The first use as an independent term referred to the round table talks in Poland , which took place between February 6 and April 5, 1989 in the transition phase from a socialist state to a democratic republic. Participants were representatives of the ruling Polish United Workers' Party , the opposition trade union Solidarność , the Catholic Church and other groups. The first round table meeting took place on February 6, 1989.

These results of the talks not only ushered in the gentle end of communist party rule in Poland, but also had a greater catalytic function and contributed significantly to the fall of communism in the states of Central and Eastern Europe.

The actual round table can be seen today in the presidential palace . It has a diameter of nine meters and seats 57 people.

Participants at the round table in the GDR 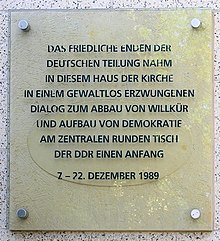 Memorial plaque on the house, Ziegelstrasse 30, in Berlin-Mitte

In the German Democratic Republic , a central round table was set up on the initiative of “ Demokratie Jetzt ” in the course of the peaceful revolution . The symbolism of the name was based on the round table in Poland, but did not adopt the round shape, but was rectangular. It met for the first time on December 7, 1989 and had a strong influence on the work of the Modrow government in the period up to the Volkskammer election in March 1990 . The first three meetings of the round table on December 7, 18 and 22, 1989 took place in the church service room of the Moravian Brethren in the Bonhoefferhaus in Berlin-Mitte. From the 4th meeting on December 27, 1989 to the 16th and final meeting on March 12, 1990, the round table met in the conference building of the Council of Ministers of the GDR at Schönhausen Palace in Berlin-Pankow, Ossietzkystraße. At the initiative of the seven new groups that were initially involved in the round table, it was convened and moderated by representatives of the churches. The moderators, who had no voting rights, were the pastor and head of the secretariat of the Federation of Evangelical Churches in the GDR Martin Ziegler , the Catholic priest and representative of the Berlin Bishops' Conference Karl-Heinz Ducke and the pastor of the Methodist Church at the time Secretary of the Working Group of Christian Churches in the GDR, Martin Lange . As a result, a large number of round tables were set up based on his model at various levels up to the municipal level, which usually worked until the local elections on May 6, 1990.

One of the first and most important points of negotiation at the Central Round Table was the dissolution of the Ministry for State Security (MfS) or its successor the Office for National Security (ANS). For this purpose, appropriate evidence of the disarmament of the State Security Service was requested from the Modrow government in the subsequent meetings.

A working group of the round table developed a new draft of a constitution, which was based on various democratic constitutions such as the Basic Law of the Federal Republic of Germany and the constitutions of Nicaragua and Spain . The working group presented the draft constitution to the public on April 4, 1990. The newly elected People's Chamber to which the draft was passed did not deal with it any further.

In addition to the central round table, round tables were held in 1989/90 in the districts of the GDR and at the municipal level.

In Hungary, the leadership decided in February 1989 to introduce a multi-party system. With the decision to open the border to Austria, the Hungarian leadership initiated the fall of the Iron Curtain and the collapse of the Eastern Bloc. Round table negotiations with the Hungarian opposition led to the first free elections on March 25, 1990.

Round table in Bulgaria 1990

In Bulgaria , Todor Zhivkov ruled for decades as party leader and chairman of the State Council. He was overthrown in November 1989 under the impression of the political change in neighboring countries. At the beginning of 1990 the CP reached a round table with the opposition. The talks led to the first free elections in June 1990 . The successor party to the KP won an absolute majority in these; The new Prime Minister was Dimitar Popov, who was not party to the party in December 1990 . In the second election in October 1991, the opposition alliance won.

Other so-called round tables

Commons : Round table  - collection of images, videos and audio files