from Wikipedia, the free encyclopedia
This is the spotted version , flagged on May 10, 2020 . There are 2 pending changes that have yet to be viewed.

Mathieu Carrière (born August 2, 1950 in Hanover ) is a German actor and author . In a career spanning more than five decades, he has appeared in over 200 cinema and television films as well as numerous series and plays . As a valued character actor of the international film Carrière worked with the important and well-known directors together of his time, including Éric Rohmer , Werner Schroeter , Volker Schlöndorff and Marguerite Duras . Brigitte Bardot , Romy Schneider , Isabelle Huppert and Claudia Cardinale were among his film partners . Because of his sometimes provocative views, Mathieu Carrière is perceived as a polarizing figure in public life in Germany and his private life is widely reported in the tabloid press . 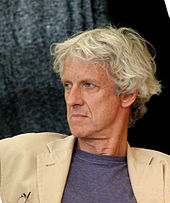 Mathieu Carrière grew up in Ilten near Hanover, in Berlin and from 1962 in Lübeck . His parents were the neurologist and psychiatrist Bern Carrière (1921–2015) and Jutta Carrière (1920–2012). The name of the German family is of Huguenot origin. At the age of 17 Carrière came to a Jesuit boarding school in Vannes, Brittany . From 1969 to 1979 he studied philosophy in Paris with Gilles Deleuze and finally published a book on Heinrich von Kleist .

Carrière lost his brother Till , a stage actor, who was two years his junior and who ended his life by suicide at the age of 26 . His sister Mareike Carrière (1954-2014), who succumbed to cancer, was also an actress and occasionally seen in front of the camera at her brother's side. Mathieu and his cousin Justus Carrière accompanied Mareike intensively during the end of her life.

The young Carrière gained his first stage experience as Emil in a dramatization of Erich Kästner's Emil and the detectives on the school stage of the Lübeck high school Katharineum . At the age of almost 14 he made his screen debut as the title hero in Rolf Thiele's Thomas Mann film adaptation of Tonio Kröger , and in 1966 the title role in the literary film adaptation of The Young Törless , Volker Schlöndorff's debut film based on Robert Musil , made him internationally known. Two years later, Carrière began his extensive film career, often shooting three to five, later even more, films a year, including almost two decades of primarily French productions. After the homoerotic historical film Gates of Paradise from 1968, directed by Andrzej Wajda, there followed leading roles in artistically demanding works such as the difficult-to-access Malpertuis by Harry Kümel alongside Orson Welles and in two films by the artist Marguerite Duras , India Song ( 1975) and Le navire Night (1979). Also worth highlighting are A Wild Life by Roger Vadim , which cemented Carrière's image of the decadent and ruthless Teuton, and the indexed slasher The Execution from 1978, in which he embodied a mass murderer. During his time in Paris, Carrière also appeared in the Alcazar de Paris as a travesty artist, stripped to monologues from Shakespeare's Hamlet and sang songs by Zarah Leander .

The coup de grace by Marguerite Yourcenar had Carrière 1976 reunited with Volker Schlöndorff, soon after he recorded ever greater success in Germany, with the lead role in the high-profile television series A man wants upwards by Hans Fallada . Notable films of the 1980s are Egon Schiele - excesses next to Jane Birkin , Passante of Sans-Souci , in which the last Romy Schneider occurred, and filled with the West German intellectual zeitgeist of those days hit movie The Woman in Flames by Robert van Ackeren . Here Carrière playeda gigolo and seduceralongside Gudrun Landgrebe - a part that would shape his role in Germany for the next ten years. On the side, he was seen in eccentric, little-known independent productions, with which he tried to escape the role model of the handsome, and appeared in exposed episode roles in the series Derrick and Der Alte . His engagements led him over time and a. also to Poland ( Bloody Snow ), Finland ( Angelas krig ), Canada ( The Bay Boy ) and the USA (series like Spenser and Back to the Past ). Around 1990, he was particularly often seen in Spanish productions, including 1988 as conscienceless killer in the orgy of violence desire to kill with Antonio Banderas and 1989 in the drama Una ombra en el jardi that showed him as a resident of a mysterious apartment building.

After the reunification, Carrière appeared in the film Rosamunde by the GDR cult director Egon Günther , followed by Malina based on the novel by Ingeborg Bachmann , directed by Werner Schroeters . Together with Burt Lancaster , he appeared in the large-scale production Die Verlobten in 1989, in 1992 alongside Michael Douglas , Liam Neeson and Melanie Griffith in Wie ein Licht im Dunkler Nacht , a spy melodrama set in Nazi Germany, and in Christopher Columbus - The explorer next to Marlon Brando . In addition, Carrière increased his already considerable workload for television enormously and became one of the most sought-after TV actors of the 1990s. From 1992 to 1995 he was seen in the idyllic family series Schloss Hohenstein , after which he was part of the international cast of the multi-part series The Return of Sandokan (1996) and Princess Amina (1997). Important appearances also took place in The Girl Rosemarie (1996) by Bernd Eichinger and as a pedophile public prosecutor in the cult crime scene of Manila .

Carrière's career was marked early on by shifting boundaries and a willingness to experiment. Once ascribed stereotypes, the artist tried to escape and alternated his appearances between highly intellectual art cinema and shallow entertainment. Since the beginning of the new millennium, the films in which he appeared have seldom achieved the quality of previous works. Mostly Carrière limited himself to concise supporting roles in historical or crime films. In the course of time he was also a guest star with Utta Danella , Pastor Braun , Ein Fall für Zwei , Unter uns , Rosenheim-Cops , Der Bulle von Tölz , Alarm für Cobra 11 and your will be done . A permanent role was Robert Broda in the telenovela Anna and Love . At the same time he intensified his theater work, went on tour with Dieter Laser and was a popular star at the Karl May Festival in Bad Segeberg in the role of the oil baron .

Since around 2010, Carrière's involvement in the entertainment sector has increased significantly. Even before that he was occasionally free with striking, sometimes harsh and controversial appearances in talk and game shows like Harald Schmidt and Zimmer! noticed. In April 2010 he took part in the dance show Let's Dance , but dropped out in the second episode, and in 2011 he was resident of the RTL jungle camp in I am a star - get me out of here! where he reached sixth place. In 2013 he took part in the docu-soap Frauentausch and changed his everyday life with the former boxer René Weller , he was also seen at the Perfect Celebrity Dinner and the Celebrity Shopping Queen . All this is sometimes interpreted by the press as the descent of a once celebrated screen idol similar to the case of Helmut Berger , while Carrière herself can also and especially gain a lot from the trash of modernity.

Carrière was married several times and has two daughters: Alice Isabelle, b. 1985 in the USA, and Elena , b. 1996. He lived in Paris, New York and Venice for many years and has moved from Lübeck to Hamburg since the death of his parents.

In 1971 Carrière received the Karlovy Vary Film Award for The House of the Bories . On June 21, 2002 he received the knighthood of the French Legion of Honor for his artistic merits.

Mathieu Carrière at a demonstration for father's rights in 2006

Mathieu Carrière is one of the most prominent critics of German divorce and custody law . He objects to the fact that the well-being of the child is defined exclusively by the mother, and calls for parental rights to be determined not by biological sex, but by the “ability to care”. Among other things, he appeared in this matter at the beginning of 2005 for Domian on WDR . There he was of the opinion that the law applicable in Germany clearly discriminates against men. This comes from the role models of the sexes from the time of National Socialism . He also indicated that he was affected himself, but did not provide any information about people or marital status .

The background to this is a long-running custody battle over his younger daughter Elena. Her mother Bettina Proske had denied him the right to visit for years and reduced him to a maintenance function and a weekend father. In 2004, Mathieu Carrière was sentenced to pay a fine of 5,000 euros following a lawsuit brought by Proske: he had not prevented their daughter from being photographed by reporters while visiting the circus. In protest against the existing laws Carrière refused to pay the sum, and sat for ten days administrative detention . Thereupon a demonstration of around 200 men’s rights activists in prison clothing took place in front of the remand prison. The relationship between Carrière and Proske has now relaxed again.

In the federal election campaigns in 2005 and 2009 Carrière supported Die Linke .