The title of this article is ambiguous. Further meanings are listed under Michael Douglas (disambiguation) . 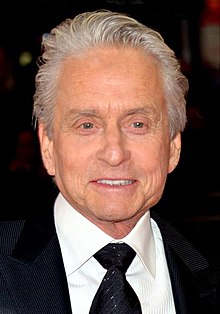 Michael Kirk Douglas (born September 25, 1944 in New Brunswick , New Jersey ) is an American actor , film producer and Oscar , Golden Globe and Emmy award winner. He is one of the leading character actors in Hollywood .

Michael Douglas is the older son of actor Kirk Douglas and his first wife Diana Dill . His younger brother is the film producer Joel Douglas .

Michael Douglas attended Eaglebrook School in Deerfield, Massachusetts . After studying at the University of California, Santa Barbara , Douglas moved to New York in the mid- 1960s , where he trained as an actor and director at the Neighborhood Playhouse and the American Place Theater . In 1969 Douglas gave in Hail, Hero! his big screen debut, for which he was nominated for a Golden Globe Award as Best Newcomer received.

Michael Douglas at the German premiere of Spirit and Darkness (1997)

As the producer of the film One Flew Over the Cuckoo's Nest , he was awarded an Oscar for best film in 1975 . Kirk Douglas had originally acquired the rights to bring the novel of the same name to the stage and film it. Kirk Douglas, who had played the lead role in the premiere of the play in 1963 , had however failed to get a film studio enthusiastic about a production. He finally left the film rights to his son, who filmed this film with Saul Zaentz . The production was carried out with Fantasy Films , which had a distribution agreement with United Artists . The film received a number of awards, including the Oscars in the five most important categories - the so-called Big Five .

Michael Douglas made his breakthrough as an actor on the side of Karl Malden with the television series The Streets of San Francisco (1972-77), in which he could be seen from the beginning to 1976 as Insp. Steve Heller. For this he was awarded three Emmys . This was followed by roles in the successful films The China Syndrome , On the Hunt for the Green Diamond and On the Hunt for the Jewel of the Nile , which were also produced by Douglas.

In 1988 he received an Acting Oscar for Wall Street . A year later he founded the production company Stonebridge Entertainment , which he renamed Douglas-Reuther Productions in 1994 . In the early 1990s , Douglas made an image change. Rather light comedies such as On the Hunt for the Jewel of the Nile or The War of the Roses were followed by increasingly controversial films such as Basic Instinct , David Fincher's The Game , Falling Down - A normal day or Traffic - Power of the cartel , which he received a lot of critical acclaim and also brought commercial success.

In 2003 he stood for It remains in the family for the first time together with his father Kirk and his son Cameron in front of the camera.

In October 1997 the British edition of Empire Magazine voted Douglas 74th of the "100 Greatest Actors of All Time". Michael Douglas is the only one next to Laurence Olivier who has both an Oscar for leading actor ( Wall Street ) and for the best film ( One Flew Over the Cuckoo's Nest ). In 2008 Douglas received the American Film Institute's Lifetime Achievement Award at the age of 64 after his father Kirk had received the same honor eighteen years earlier. This award was presented on June 11, 2009 in Los Angeles . The title role in Steven Soderbergh's television film Liberace (2013) earned Douglas an Emmy and a Golden Globe Award . Douglas received another Golden Globe Award in early January 2019 for his performance in the Netflix series The Kominsky Method .

Since The Streets of San Francisco , Douglas has been dubbed almost without exception by Volker Brandt . When the Golden Camera was awarded in 1990 , Brandt even spoke live for Michael Douglas, and the two actors have been in good contact ever since. 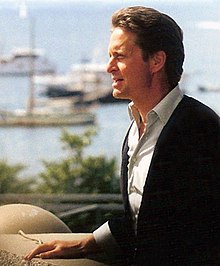