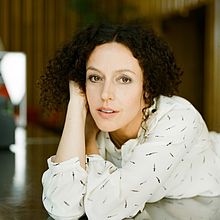 Maria Schrader (born September 27, 1965 in Hanover ) is a German actress , director and screenwriter .

Maria Schrader was born in Hanover in 1965 as the daughter of a painter and a sculptor. She attended the Matthias-Claudius-Gymnasium in Gehrden , a town near Hanover. There she worked for several years in the theater group. At the age of fifteen she began her acting career in the theater. This was followed in 1983 by acting training at the Max Reinhardt Seminar in Vienna , which she broke off after two years. In the 1982/83 season she was part of the ensemble of the State Theater of Hanover . Appearances in Vienna, Venice and Bonn followed . Since the 2013/14 season she has been part of the ensemble of the Deutsches Schauspielhaus in Hamburg .

In 1989 Schrader made her film debut in the comedy RobbyKallePaul by director and actor Dani Levy . Schrader has a long-term collaboration with him, and in many of his films Schrader took on leading roles, most recently in the 2002 production Väter . Several times both were together in front of the camera of other directors, for example in Max Färberböck's successful film Aimée & Jaguar from 1997. Schrader co-wrote and gained initial directing experience on Levy's film Meschugge from 1998.

Schrader also worked several times with Doris Dörrie , including on the film Nobody Loves Me , which brought Schrader several awards. There were also collaborations with Hal Hartley , Agnieszka Holland , Margarethe von Trotta and Jan Schomburg .

In 2005, Schrader first directed the film adaptation of Zeruya Shalev's bestseller Liebesleben . The film, whose screenplay she wrote together with Laila Stieler , was released in German cinemas in November 2007. In 2016 she presented her second directorial work with the Stefan Zweig biography Before the Dawn . Maria Schrader wrote the script for the film, which was received positively by critics, together with Jan Schomburg.

In 2020, Schrader took over the direction of the Netflix miniseries Unorthodox , which is based on the book of the same name by Deborah Feldman .

Maria Schrader has already received the Federal Film Prize several times, including the film tape in gold for performance for Nobody Loves Me , Burning Life and One of my oldest friends . She also received the gold tape for best leading actress for her role in the film drama Aimée & Jaguar . Maria Schrader was awarded the Silver Bear at the 1999 Berlin International Film Festival for this very image . In the same year she received the award for German Shooting Star of European Film.

In 2016, Schrader was nominated for Best Actress as part of the Festival de Télévision de Monte-Carlo for her role as Lenora Rauch in the highly acclaimed German series Deutschland 83 . In 2016 she was also awarded the Herbert Strate Prize .

Her film Before the Dawn was awarded the Audience Award at the 2017 European Film Awards. This was Austria's Oscar candidate in 2017 in the category “ Best Foreign Language Film ”, but was not shortlisted.

In 2018 she was awarded the Berlin Bear (BZ Culture Prize) .

As a voice actress