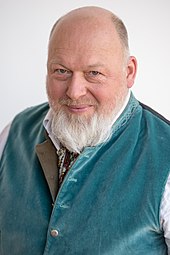 Rainer Kaufmann (born June 6, 1959 in Frankfurt am Main ) is a German film director and screenwriter .

After graduating from high school in 1979, doing community service in an SOS Children's Village and working as a carpenter, Rainer Kaufmann studied German language and literature and film studies with Christine Noll Brinckmann at the Goethe University in Frankfurt am Main and completed a guest course at the Städelschule . From 1983 to 1990 he studied directing at the University of Television and Film in Munich .

Rainer Kaufmann has a daughter together with the actress Maria Schrader . At times he taught directing at the Hamburg Media School .

The spectrum of Rainer Kaufmann's work ranges from commercially successful entertainment cinema to challenging and award-winning television films such as Maria's Last Journey . Kaufmann made a significant contribution to the success of the New German Cinema in the 1990s. Katja Riemann in particular became famous through films like Stadt talk and Die Apothekerin , but some other actors received awards for their work with Kaufmann. His films often show women who have to assert themselves in tricky love affairs. Some of his works are film adaptations . With his film premieres, he is often a guest at the Munich Film Festival .

The short film Salt for Life was made in 1989 at the University of Television and Film in Munich, with Katja Riemann in the lead role. The surreal short film The Most Beautiful Breasts of the World was released in 1990 as a supporting film by Katja von Garnier's university film Make-up! to the cinema, which was a surprise success with 1.1 million visitors. The socially critical television play from the right-wing radical scene Then just with violence (1993), starring Jürgen Vogel and Jasmin Tabatabai , has won several awards. A woman ( Maria Schrader ) between two men ( Richy Müller and Peter Lohmeyer ) - that is the subject of the feature film One of My Oldest Friends from 1994. The film adaptation of a short story by F. Scott Fitzgerald , produced for television on a low budget , also came into the Movie theater. Innschuldsengel is a television crime thriller from 1994, whose actors (including Nicolette Krebitz , Jürgen Vogel and Moritz Bleibtreu ) were later among the stars of the New German Cinema . Also Talk of the Town (1995) - a comedy about the amorous entanglements of a radio presenter (Katja Riemann) - was originally filmed for television. The theatrical version proved to be a hit with around 1.67 million viewers in Germany. 1.5 million viewers saw the film Die Apothekerin (1997) based on a novel by Ingrid Noll in cinemas. As a pharmacist, Katja Riemann uses a pharmaceutical approach to dispose of her relationship problems. She received the German Film Prize for best actress for her role in this film.

Kaufmann himself described his third full-length feature film Long Hello & Short Goodbye (1999) as Neo-Noir . Nicolette Krebitz falls in love as an undercover agent with a gangster portrayed by Marc Hosemann . The unconventional film attracted fewer than 60,000 visitors to German cinemas. The film adaptation of Ingrid Noll's novel Kalt ist der Abendhauch , published in 2000, also failed to match Kaufmann's greatest successes with around 430,000 moviegoers. An old woman is waiting for her lover, whom she has not seen for a long time, and she remembers the turbulent war and post-war times. But there is still a body in the basement. Gisela Trowe and Heinz Bennent , among others, star in the film, which is developed in a flashback structure . The until then unknown leading actress Fritzi Haberlandt received the Bavarian Film Prize 2000 for best young actress.

With And the bride knew nothing (2002), a ZDF -Liebeskomödie with Julia Jentsch , and the job of his life (2003), an ARD -Verwechslungskomödie with Wolfgang Stumph , followed by two entertainment films for television. The Cherry Queen, based on the novel of the same name by Justus Pfaue, is a three-part historical film produced for Arte and ZDF from 2004. Johanna Wokalek plays the daughter of a Jewish banker who can assert herself in the changing circumstances between the late imperial era and the early GDR . The 2005 BR film Maria's last trip with Monica Bleibtreu as a terminally ill with cancer farmer received numerous awards, including the Adolf Grimme Prize with gold and the German Television Prize 2005 as the best television film of the year.

A Fleeing Horse from 2007, a film adaptation of Martin Walser 's novel of the same name, was Kaufmann's first feature film to hit cinemas in 2000. Around 360,000 cinema-goers saw the film with Ulrich Noethen , Katja Riemann, Ulrich Tukur and Petra Schmidt-Schaller in the leading roles. The film has been nominated several times for awards, Petra Schmidt-Schaller received the Bavarian Film Prize 2007 for best young actress. In the tragicomedy Ein starker Abgang , a television film from 2008, Bruno Ganz as an aging, misanthropic writer and Monica Bleibtreu as his nutritionistare engaged ina continuous duel during a reading tour. A strong departure was nominated for the competitions of the TV Film Festival Baden-Baden 2008 and the Festival de Télévision de Monte-Carlo 2009. With Thanksgiving in 2009,an Allgäu thriller by the author duo Volker Klüpfel and Michael Kobr was filmedfor the first timefor Bavarian TV . The main character Hauptkommissar Kluftinger is played by Herbert Knaup , who grew up in the Allgäu and was awarded the Bavarian TV Prize 2010for this role.

The television film Ella's Secret, made for ARTE and ZDF, with Hannelore Hoger in the leading role tells the story of a neuropsychologist who returns to her old home South Africa after decades from Germany and is confronted there with her own past shaped by apartheid : she had as White has a prohibited relationship with a black person. The BR / ARD television film In aller Stille with Nina Kunzendorf was the second collaboration with the screenwriter Ariela Bogenberger after Maria's last trip and was also awarded several times. Foehn position. After Thanksgiving, an Alpine thriller is another regional thriller for Bavarian television. Martin Feifel plays the leading role . The producers Wolfgang Behr and Dietmar Güntsche received the Bernd Burgemeister TV Award for the best TV film at the Munich Film Festival 2011.

“I work, which means I really enjoy filming. I just don't feel like sitting around for three years and waiting until I can collect five million for a movie and then maybe dump it because I have too little experience. So I work for television, which by the way, I love to do. So far I've been very lucky with the materials and I've always been able to learn something new. "

- Rainer Kaufmann in an interview on Dirk Jasper Filmstar Lexikon

“In my opinion, there are two options for cinema films: Either you shoot a great festival film, or you aim for a large audience. Personally, I would say that you should always keep an eye on at least a million viewers when watching a movie. I think that's part of it, otherwise there is no point in working for the canvas. "

- Rainer Kaufmann in an interview on Dirk Jasper Filmstar Lexikon 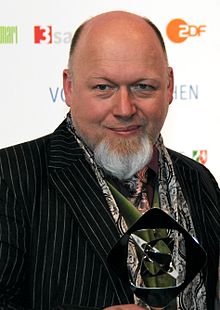 Rainer Kaufmann at the Grimme Awards 2011