University of Television and Film Munich

Entrance area of ​​the HFF

The University of Television and Film Munich ( HFF Munich ) is a state film school sponsored by the Free State of Bavaria . 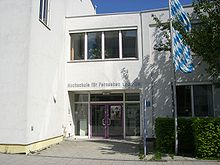 The university was initiated and co-founded on July 19, 1966 by the then television director of Bayerischer Rundfunk, Helmut Oeller , who taught there for a few years and was later also rector of the university. Since the founding year, 1664 students have completed their studies at the HFF Munich. From 1967 to 1988 the Munich Film School was housed in an old villa on Kaulbachstrasse . Since the building was only partially suitable for teaching all subjects, the rooms in Ohmstrasse, the former German Institute for Film and Television (DIFF), the BR studios at Rundfunkplatz and in Freimann, the Bavaria in Geiselgasteig and of the ZDF in Unterföhring. Department II technology and the cutting rooms were housed in the Prinzregententheater , which was not used at the time. In 1988 the company moved to the former bed spring factory in the Ramersdorf district of Munich (on the border with the Giesing district). The HFF Munich got its first own film and television studio. In 2007 the HFF Munich celebrated its 40th anniversary, as well as the laying of the foundation stone for a new building in the Kunstareal Munich on the former site of the south building of the TU Munich , based on the design by Cologne architect Peter Böhm , which was built on Gabelsbergerstraße opposite the Alte Pinakothek and was inaugurated on September 15, 2011. Today the postal address is Bernd-Eichinger-Platz 1 . The new HFF building houses seminar rooms as well as three cinemas, 2 TV studios, 2 film studios and a post-production wing.

In 2015, several changes to the status and election of the president came into force. For the first time, the position was advertised publicly, previously only professors and department heads could apply. Up to and including the term of office of Gerhard Fuchs , which ended on September 30, 2015 , the HFF was headed by a part-time president (until 2007 rector ). From his successor, Bettina Reitz , it is a full-time position with a term of office of four years.

The HFF is a founding member of MedienCampus Bayern , the umbrella organization for media education and training in Bavaria.

You can apply for the following five courses:

The courses offered by the

In addition, there is a postgraduate course in theater, film and television criticism in cooperation with the Bavarian Theater Academy August Everding .

Since 2007, the HFF Munich has also offered parts of its technical course to external students. The Study Center for Film Technology at the HFF Munich has been holding practical and theoretical workshops on film technology topics from February to April since 2009. In addition, some modules can also be booked as e-training .

In the film university ranking of the news magazine Focus (issue 22/2006), which was created in cooperation with the Art Directors Club , the HFF Munich took a place in the middle. The Baden-Württemberg Film Academy , the Cologne International Film School , the Cologne Academy of Media Arts and the German Film and Television Academy Berlin took top positions. In addition to the reputation of the university, the supervision situation of the students, the technical equipment and the number of prizes won were an evaluation criterion. The entire film school ranking of the Focus and the Art Directors Club was later accused of methodical errors from various sides.

Achievements at the Oscars

Some graduates and students of the HFF Munich were nominated for or received the Oscar or student Oscar: Katja von Garnier received the Student Oscar for Make-up in 1994 , Florian Gallenberger won the Student Oscar in 2000 and the Short Film Oscar in 2001 Awarded for Quiero ser , Caroline Link received an Oscar nomination for Beyond Silence in 1997 and finally won it in 2003 for Nowhere in Africa . Wim Wenders has already been nominated three times for the Oscar in the category Best Documentary: 2000 for 'Buena Vista Social Club', 2012 for 'Pina' and 2015 for 'The Salt of the Earth'. In 2005, the Oscar nomination for The Story of the Weeping Camel crowned the film success of the two HFF students Luigi Falorni and Byambasuren Davaa .

On February 25, 2007 the Stasi drama The Lives of Others by Florian Henckel von Donnersmarck received the Oscar in the category of best foreign language film . In May 2007, Fair Trade by Michael Dreher and Milan by Michaela Kezele were nominated for the student Oscar.

Several films with the participation of HFF students or alumni were nominated for the Oscars 2019: HFF student Christopher Aoun was responsible for the image design of the Lebanese film Capernaum , which is nominated for the category Best Foreign Language Film . Director Florian Henckel von Donnersmarck and producers Quirin Berg and Max Wiedemann were again nominated for Best Foreign Language Film , which was also nominated for Best Cinematography , with the film Werk ohne Autor . HFF graduate Tobias N. Siebert was in the running for the Oscar for Best Documentary as a producer with Of Fathers and Sons .

In 2020, Julia von Heinz and Marcus H. Rosenmüller will take over the management of the cinema and television film directing course as a dual leadership , as the successor to Andreas Gruber , who will retire in October 2020 and head the department for 18 years.