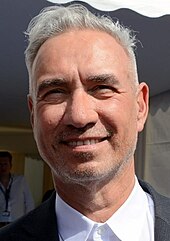 Roland Emmerich (born November 10, 1955 in Stuttgart ) is a German film producer , director and screenwriter . He became known through disaster films such as Independence Day , Godzilla , The Day After Tomorrow and 2012, as well as with the science fiction film Stargate , on which several series and films are based.

Roland Emmerich was born in Stuttgart-Obertürkheim and grew up in Maichingen . He attended high school in the Sindelfingen parish meadows . His sister Ute Emmerich is the boss of the joint production company Centropolis Entertainment (formerly Centropolis Film), which was founded in 1985, and is an executive producer on most of his films, just like himself .

In July 2017, Emmerich married his long-term partner. He lives in Los Angeles , London and Berlin . Emmerich is committed to human rights . So he sat on the jury that helped choose a universal logo for human rights .

In 1977 he began to study production design at the University of Television and Film Munich . After watching Star Wars , he switched to directing. His graduation film The Noah's Ark principle went beyond the scope in every respect. Largely outside financing, it cost about one million DM  - the budget for a graduation film at that time was 20,000 DM. The genre was also irritating, because opulently equipped science fiction films from Germany were rather unusual. Ultimately, the film, which premiered at the Berlin International Film Festival in 1984 , was a success.

With the films produced in Germany but shot in English, such as Joey , Hollywood Monster and Moon 44 , Emmerich was finally able to attract attention in Hollywood . Another result of the film Moon 44 was the long collaboration with Dean Devlin , who worked from then on as a writer and producer in Emmerich films, and Volker Engel , who as VFX - Supervisor for the special effects recorded several of his movies responsible. In 1992 he directed the science fiction film Universal Soldier with Jean-Claude Van Damme and Dolph Lundgren , with which he achieved his final breakthrough in Hollywood. He put his long-standing interest in pre-astronautics and the theories of Erich von Däniken into practice in 1994 with the film Stargate .

He reached the temporary high point of his career in 1996 with Independence Day , a blockbuster that still occupies one of the top places in the rankings of the most successful films . In 1998, Godzilla was a reinterpretation of the Japanese monster films. In 1994 he worked as a producer on the film High Crusade - Frikassee im Raum and in 1999 on the film The Thirteenth Floor . In 2000, Emmerich entered more serious territory when he directed Der Patriot , set in 1776 at the time of the American Revolution . Mel Gibson and Heath Ledger played the leading roles . In the period after that, Emmerich limited himself mainly to producing, before returning to the screen as a director in May 2004 with The Day After Tomorrow . In an interview with Merian magazine in November 2009, Emmerich said that 2012 would be his last disaster movie. “It's the mother of all destruction films, with effects like you've never seen before. I really don't know what to destroy afterwards. "

Other activities and projects

At the Berlinale 2005 , Emmerich was President of the International Jury. In 2006 he donated US $ 150,000 to the Legacy Project , a joint project between UCLA's film and television archive and Los Angeles' largest film festival, Outfest , to preserve and restore films by lesbian and gay artists. In 2007 Emmerich was a guest speaker at fmx / 07 in Stuttgart, one of the most important international conferences for animation, effects, games and digital media. In March 2008 his project 10.000 BC (screenplay: Roland Emmerich and Harald Kloser ) came into cinemas worldwide; a film after the Sony studio Columbia Pictures had temporarily lost his interest by Warner Bros. produced. The strip, which cost around 110 million US dollars, had already grossed more than 200 million US dollars after just four weeks.

Emmerich's 2012 film with John Cusack , Woody Harrelson and Danny Glover in the leading roles opened in cinemas worldwide on November 12, 2009 and after just eight weeks achieved worldwide box office earnings of 730 million US dollars. 2012 is the second most successful film of his career. From March 2010, the shooting for his film Anonymus (working title: "Soul of the Age") took place in the Babelsberg film studios in Potsdam . The drama about the authorship of the works by William Shakespeare based on a script by John Orloff (including the scriptwriter of Band of Brothers ) started in Germany in November 2011. Anonymus was presented to the press and media at the Frankfurt Book Fair . During a subsequent panel discussion , Emmerich discussed with the publicist Hellmuth Karasek , the President of the German Shakespeare Society and university lecturer for English studies Tobias Döring , the Shakespeare translator Frank Günther and the author of the book The Man Who Invented Shakespeare , Kurt Kreiler . The topic of discussion was the longstanding debate about William Shakespeare authorship .

At the end of 2012, Emmerich shot the film White House Down , which premiered in June 2013. It is about a Secret Service employee ( Channing Tatum ) who is supposed to save the life of the American President ( Jamie Foxx ), who has been captured by a paramilitary group in the White House. Roland Emmerich has postponed a remake of the movie Die fantastische Reise , One Nation (a political thriller, written by The-Day-After-Tomorrow screenwriter Jeffrey Nachmanoff) and King Tut , a film about the Egyptian pharaoh Tutankhamun, until further notice .

In 2014, Emmerich prepared the film adaptation of the historical epic Maya Lord , which is based on the novel by the writer John Cue Robbins. It is the film adaptation of the true story of Gonzalo Guerrero , who was captured by Maya in 1511 after a shipwreck and who eventually became their ally. In summer 2014 he directed the drama Stonewall based on a script by Jon Robin Baitz , the film was released in the US in September 2015.

After his film Godzilla had already won the 1999 “ Golden Raspberry 1999 ” competition in the worst remake or sequel and worst supporting actress categories and also had four unsuccessful nominations, the 2017 selection was his sequel film Independence Day: Return for five more “Golden Raspberries ”, including again for worst director, worst screenplay and worst film.