This article describes the translator Frank Günther. For the entertainer see Günther Frank . 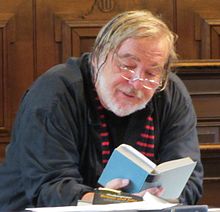 Frank Günther grew up in Wiesbaden . After studying English, German and theater history in Mainz and Bochum , he worked as a freelance assistant director and director at several theaters until 1974 . While still working at the theater, he translated new and old dramatic works into German. From the 1970s he translated the complete works of William Shakespeare ; In 2017 the last of the translated dramas appeared with Pericles, Prince of Tire .

In 2001 Günther received the Christoph Martin Wieland Prize for Translators, named after Wieland , the first German Shakespeare translator , and in 2006 the Heinrich Maria Ledig Rowohlt Prize . In the 2007/08 winter semester he was visiting professor for translation at the Free University of Berlin . In 2011 Günther was awarded the Johann Heinrich Voß Prize for Translation from the German Academy for Language and Poetry .

He was a member of the PEN Center Germany .

Günther lived in Rot an der Rot in Upper Swabia . He died in October 2020 at the age of 73 after a brief serious illness in Ulm.

In 2014, on the occasion of Shakespeare's 450th birthday, two books by Günther were published: Our Shakespeare. Insights into Shakespeare's foreign-related times as well as the bilingual collection of quotations from Shakespeare's word treasures . In 2016 his translation of The Booke of Sir Thomas Moore was published under the title The Strangers. For more compassion . This fragment of a dramatic scene is believed to be the only surviving handwritten manuscript by Shakespeare.