Part of the campus area with auditorium and cafeteria (building 'IA', top left, demolished and rebuilt)

The N building ("natural sciences"), in the foreground the NA building, which is currently being refurbished or rebuilt and is therefore currently empty

In 1962, the RUB was the first university to be founded in the Federal Republic . The university was set up outside the city as a campus university in Querenburg : with the exception of a few branch offices, all 10 faculties are housed on the university premises. The university, the residential town of Hustadt and the Uni-Center shopping center that supplies both have dominated the district since then. Teaching began in 1965, three years after the RUB was founded.

The university has been a reform university since its inception . It played a pioneering role in Germany when it came to introducing tiered study programs in accordance with the Bologna Declaration . Due to its size, the RUB is one of the German universities with the greatest variety of subjects. The medical students do not complete their practical training centrally in their own clinic, but are distributed to various hospitals in Bochum and the surrounding area. Until 2012, this decentralized training, which is unique in Germany, was also known as the Bochum model . However, since 2012 the clinics involved have presented themselves with a uniform appearance as the University Hospital of the Ruhr University (UK RUB) .

Numerous important scientists worked or are working at the RUB. Nationwide, it ranks second in the number of DFG special research areas (status in the 2010s). In the DFG ranking among the 40 German universities with the highest funding volume for research projects from 2002 to 2004, it was ranked third in the life sciences, ninth in engineering and 12th in natural sciences. In the overall comparison, the RUB achieved 15th place.

In 2007 and 2011, the Ruhr University was in the final round of the excellence initiative carried out by the federal government and prevailed in two of three funding lines, but did not achieve the coveted status of an elite university. In 2018, RUB also took part in the Excellence Strategy.

Seal of the RUB, which was also used as a logo until 2009

The history of the University of Bochum begins as early as 1948 in the first electoral term of the state parliament with the cross-faction demand for a second technical university in Westphalia. However, the city of Dortmund was the favorite for the location . The culture committee approved on December 20, 1960 - and thus only twelve years later - the funds for the purchase of a corresponding site in Westphalia. The Science Council had previously recommended founding a university in the "North Rhine-Westphalian industrial area". After further discussions, some of which were bitter, the Querenburg location won 102 to 87 votes against Dortmund in the state parliament.

After further preliminary planning of the scientific focal points, an ideas competition was launched in 1962, to which well-known architects such as Gropius and Mies van der Rohe were invited, but to which all other architects based in the Federal Republic of Germany were also admitted. Out of the 85 submitted designs, the one by Hentrich , Petschnigg & Partner from Düsseldorf prevailed. 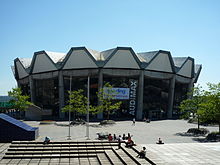 Construction of the university began on January 2, 1964 with the earthworks for the IA, IB and IC engineering buildings. By using a uniform grid dimension for the structure of the buildings, precast concrete parts could be produced directly on the construction site using industrial casting processes, which meant that engineering could start operations as early as June 30, 1965, while the construction work for the buildings of the natural and humanities and medicine lasted until August 1969. The central forum area with library, administration, auditorium and canteen was only started in 1971 and completed on August 1, 1974.

On October 16, 2015, the university complex, the botanical garden and the Dr.-Gerhard-Petschelt bridge across Universitätsstraße were entered in the monuments list of the city of Bochum.

In March 2007, the three universities of Bochum, Dortmund and Duisburg-Essen founded the University Alliance Ruhr (UA Ruhr) , which strengthens the cooperation between teaching and research activities of the universities involved and gives the universities a better starting position as an excellent location for national and international scientific and study landscape should give. As one of the first UA Ruhr projects, Ruhr Campus Online is promoting cross- university teaching between the three Ruhr universities using blended learning. 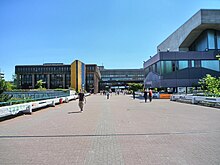 Main entrance to the Ruhr University

Staircase in building IC before the building's major renovation

The campus is on the edge of a hill above Lake Kemnader . 13 main buildings are grouped in four symmetrical complexes of three to four high-rise buildings each around the canteen, the Audimax, the university library and the university forum.

The architectural concept comes from Helmut Hentrich (Hentrich, Petschnigg & Partner architects). He sees the university as a “port in the sea of ​​knowledge”. The buildings themselves symbolize ships that have "docked" at their entrances, the roof of the Audimax is reminiscent of a shell. The “Ruhr-Universität” station on the U35 light rail line was designed to match this at the beginning of the 1990s , and its roof is supposed to represent waves.

Originally, the RUB was planned to be much larger. Several buildings were not built, including the planned university hospital. Two of the three buildings planned for the medical faculty ( MB and MC ) were completed but never occupied. They stood empty for years until they were finally leased to private companies. The income generated from this was used for the construction of the “Europahaus” dormitory. The MB building became a university building again in 2019. From the end of 2022, the building is to be fully used by the university again.

In the Audimax, which also served as the venue for the Bochum Symphony Orchestra (until the opening of the music forum in 2016) , is one of the most modern and largest organs from the Klais organ manufacturer . The organ from 1998 has 6400 pipes, which are grouped in 82 registers.

The architecture of the Ruhr University remains a controversial topic to this day. The almost sole building material concrete creates - like most other concrete structures - a dreary overall impression in bad weather. In good weather, on the other hand, the light concrete contrasts with the blue sky, creating an open, sun-drenched overall impression. At the beginning of the 1990s, the hard concrete architecture was softened by color-contrasting exterior paintwork, redesigning the main building and the creation of green spaces. As part of the Excellence Initiative, the university has been gradually renovated since 2007.

The University's Botanical Garden is located on the slope that descends steeply towards the Ruhr .

The ongoing and long-term campus renovation has so far included the following measures:

The renovations also lead to a significant redesign of the campus. Among other things, almost all of the remaining green spaces between and next to the buildings are gradually being built on. These buildings are z. T. used commercially. As a compensation, numerous flat roofs will be greened.

Furthermore, there are five research buildings on or outside the campus or are in the planning / construction phase:

Musical center with the studio stage

The conception of the Audimax already provided for the installation of a concert organ, but this was not implemented for cost reasons. Only 20 years later, in 1998, the Klais organ building company from Bonn built the largest concert hall organ in North Rhine-Westphalia with 6400  pipes . It has 82  registers , distributed over four manuals and pedals , which can be made to sound either with mechanical action from the main console on the organ or on the mobile electric console . The stop action of the two, not only visually very different, gaming tables are electric. Visually, in the truest sense of the word (in the room as horizontal) are outstanding, the reed pipes of the four registers of Bombardwerks. The pipes of the II. And III. Manuals (positive and recit) are each in a separate swell box .
A water pipe burst damaged the organ in 2013, and the renovation work on the hall also caused damage from drilling dust. Finally, it was completely overhauled and cleaned in July 2015. 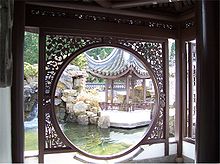 Chinese architecture and gardening in the RUB Botanical Garden

The university maintains the Botanical Garden of the Ruhr University Bochum , which is known as a destination far beyond the borders of the region. Part of the Botanical Garden is the approximately 1000 square meter Chinese Garden, which was donated by the Tongji University in Shanghai and is called "Qian Yuan" ( Chinese  潜 园 , Pinyin Qián Yuán ). On March 23, 2015, the Chinese Garden was badly damaged by vandalism, but has now reopened after repairs.

In the middle of the university campus, to the side of the Audimax, is the campus center, where items for student needs and beyond can be purchased. Among other things, there is a bookstore, a music and record shop, a café , a kiosk and other shops for daily needs. The campus center has been in this location for more than 15 years, with some of the stores having been at the university for more than 30 years. Due to possible renovation work and fixed-term contracts on the part of the university administration, it is unclear how long the Campus Center may stay at this location. The Campus Center should not be confused with the Uni-Center , which is on the other side of Universitätsstraße and a little outside the university grounds.

The interests of the students are represented by a general student committee, which is elected by the student parliament. The composition of the parliament with 35 seats is determined in annual elections, the turnout in 2018 was 8.45%, in 2019 it was 9.8%. The AStA awards funds to the student councils .

On December 8, 2007, the semester party (performing bands Culcha Candela , Juli and 2raumwohnung ) of the AStAs, led by Jusos , RCDS and Liberals, closed with costs of over 200,000 euros, which had an income of around 20,000 euros (originally 3700 guests were planned because of Fire protection regulations were only allowed 2400 people, ultimately only 1100 cards were sold). The Bochum district court sentenced AStA chairman Fabian Ferber to social hours. The fourth chamber of the Administrative Court in Gelsenkirchen sentenced those responsible on December 11, 2013 to 176,000 euros in damages to the student body. In May 2015 the appeal was approved by the North Rhine-Westphalia Higher Administrative Court . On January 26, 2016, the 15th Senate of the OVG reduced the damages to be paid by the two organizers Fabian Ferber and Uwe Bullerjahn due to contributory negligence on the part of the student parliament to 88,122.56 euros (Ref. 15 A 333714).

The animal experiments are controversial in the composed student body and various university groups. In 1998 both sides took part in a joint action on the Gerhard-Petschelt Bridge .

According to the organization Doctors Against Animal Experiments , 12,962 vertebrates were procured for research and teaching at the university in 2009 alone:

The experiments with macaque monkeys at the Department of Neurobiology were approved by the Arnsberg district government until August 31, 2012. Animal experiment opponents had criticized that the whereabouts of the animals was unclear afterwards.

The animal welfare officer of the university, Matthias Schmidt, points out that students should expect to carry out animal experiments in their job. The aim and purpose of the experiment should be reasonably justified.