Manual (from Latin manus = hand) describes a keyboard of keyboard instruments in music that is operated with the hands, in contrast to the (foot-operated) pedal .

Distribution of the semitones in a 19-step harpsichord cromatico

The ancient Hydraulis had a single row keyboard with seven keys per octave that corresponded to the seven notes of a heptatonic scale. For the other diatonic tones, a second row with upper keys was created in the course of the Middle Ages. The illustrations in Michael Praetorius ' Syntagma musicum (Volume 2: De Organographia , 1619) of the organ of the cathedral in Halberstadt by Nicholas Faber from 1361 are considered the oldest examples of the arrangement of seven lower keys and five (two and three) upper keys that are common today.

The medieval organs had a smaller manual and pitch range. The original range of one octave was expanded to 2 1 ⁄ 2  octaves (B – f²) in the late Gothic period . The Rysum organ pointed at its construction in the 15th century this extent at all diatonic tones. In the Renaissance, from the end of the 16th century, the range was usually extended to the low F, and in the Baroque to the low C, as is still common today. The standard range of modern organs is four to five octaves.

In mid-tone keyed instruments, the upper keys were sometimes split to increase the number of pure thirds. Such subsemitonies can be detected in around 70 organs in Germany, Italy, the Netherlands, England, Sweden and Denmark, which were built between 1468 and 1721. The number of keys was then 13 to 16 keys per octave. In harpsichords of the theorists mentioned Gioseffo Zarlino in his work Le istituzioni harmoniche (1558) a number of 19 keys per octave ( harpsichord cromatico ), as Praetorius (1619; harpsichord universal ). The Archicembalo, invented by Nicola Vicentino in 1555, had 36 keys per octave. A harpsichord by Vito de Trasuntino from 1606 with 31 keys per octave is preserved in the Museo Internazionale e Biblioteca della Musica in Bologna. With the advent of the Well-Tempered Mood , split upper keys became superfluous.

In historical organs, the short or broken octave is often found in the bass octave . Since the low C sharp is only rarely used in organ literature, but caused high material costs due to the large pipes, it was often left out until the beginning of the 19th century. The key was either missing without replacement or was coupled to the C sharp one octave higher.

The piano was made at the beginning of the 18th century a. a. Invented by Bartolomeo Cristofori and had a range of five octaves. The further development of the technology by John Broadwood led to an expansion of the pitch range by an octave in 1794, until the instruments were produced from the 1830s with today's standard pitch range of 88 keys. Concert grand pianos like the “Imperial” from Bösendorfer rarely have a range of eight octaves (97 keys). 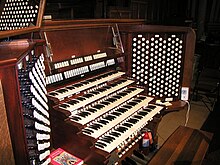 Manuals of the organ of St. Patrick's Cathedral in New York , 20th century

Positive , portative , shelves and other small organs are usually only built with one manual. Harpsichords usually have one or two, rarely three manuals.

While in Italy only one-manual harpsichords were built until the 18th century, harpsichords with two manuals have been found in France since at least 1648 (like the one from Jean II Denis). In Flanders, two-manual harpsichords go back to the Ruckers family between around 1570 and 1650 . The upper manual of this "transposing harpsichord" was always tuned a fourth higher than the lower manual. Hieronymus Albrecht Hass built a large three-manual harpsichord with a 16-foot register in 1740.

Among the curiosities are the box-shaped combination instruments that the Ruckers built in the 17th century as a combination of a harpsichord with a virginal. They had two keyboards on two different sides and could not be operated by one person at the same time.

Organs are usually equipped with one to three manuals, large organs with four to six manuals. The first four-manual organs were built in the Baroque era. In the legendary Winchester organ from 980, 400 bronze pipes are said to have provided an enormous volume with two manuals with 20 keys each. Ten whistles sounded simultaneously on each key. Thanks to Gottfried Fritzsche's extension work, the Hamburg organs in St. Jacobi and St. Katharinen were among the first to have four manuals. Arp Schnitger created four four-manual organs in Hamburg, Groningen and Zwolle. In 1777 François-Henri Clicquot completed an organ with five manuals and a pedal in St-Nicolas-des-Champs in Paris. The Atlantic City Convention Hall organ has seven manuals.